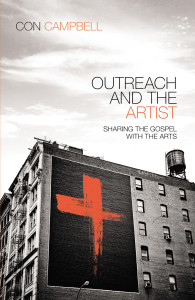 In this easy to read, autobiographical handbook, Con Campbell, Associate Professor of New Testament at Trinity Evangelical Divinity School (Deerfield, IL, USA), opens up the conversation of “evangelism with, through, and to the arts.”[p. 12] Admittedly autobiographical,[p. 13] the book has its limitations. “One of the limitations … is that it is related to music, and jazz in particular.”[p. 14] That said, Campbell attempts to address this limitation “by a collection of artist profiles.”[p. 14]

In Chapter 1, “A Jazz Testimonial,” Campbell tells his story, one in which he “gave up jazz for God.” That said, God “gave it right back…. with a higher purpose than it had ever had before.”[p. 23]

Chapters 2 and 3 address the first of Campbell’s emphases: outreach with the arts. Along these lines, he notes: “there is huge potential to marry the arts with the message of Jesus.”[p. 30] For Campbell, this has taken the form of jazz nights, concerts during which he gives “a talk that moves from jazz to Jesus.”[p. 32] That said, Campbell is against “the old ‘bait and switch’ technique.”[p. 50] He states: “Churches and their people really must be up front that the event to which they are inviting people will have some sort of message about Jesus.”[p. 51]

In Chapter 4, Campbell turns to the second of his emphases: outreach through the arts. Two approaches are considered: 1) the message and the medium, and 2) the medium and the message. The first gives priority to the message, the second to the medium. Regarding the first, Campbell notes: “With this kind of outreach, the vehicle is ultimately not that important…. it is basically a tool used in service of a higher purpose.”[p. 62] The gospel, then, comes to the fore in this approach. In contrast, the second approach “is necessarily less explicit in its gospel content.”[p. 64]

In Chapter 5, Campbell addresses the third of his emphases: outreach to the arts (i.e., unbelieving artists and artistic communities). He argues that artists live within artistic subcultures, and that these “artistic communities are best regarded as ‘unreached people groups.'”[p. 76] He goes on to identify two kinds of effective missionaries: “the believing artist” and “the Christian with an interest in the arts.”[p. 79]

Chapter 6 addresses tensions between artists and the Church, and Chapter 7 addresses what Campbell takes to be “the central issue in outreach to artists;” namely, idolatry.[p. 99] His conclusion? “We need to affirm the wonder and beauty of art, but also teach that it is not god.”[p. 103]

Positively, I want to affirm Campbell’s evangelical passion for the Gospel and Christian witness, as well as his desire “to encourage artists to make use of their gifts for evangelism.”[p. 12] Whether or not he “help[s] them to think through the issues involved in doing that”[p. 12] is, however, less sure.

To begin, Campbell describes his “jazz nights as a ‘first date.’ … a wonderful first contact with Christianity.”[p. 52] I’m in favor of this sort of patient evangelism if for no other reason than that it puts us in our place. It’s not all up to us. Evangelism is collaborative – one plants, another waters, but God makes things grow (1 Corinthians 3:5-7). It’s a process distributed across space and time. I’m less comfortable, however, with statements like “in the first set, I’m selling jazz; in the second, I’m selling the gospel!”[p. 54] In fact, the whole of Chapter 3, “What Works and Why,” tends toward the pragmatism Nancy Pearcey describes in Total Truth.[pp. 286ff.]

Chapter 4 raises additional problems. First, and with regard to “the message and the medium,” I wonder whether we can ever say that “the vehicle is ultimately not that important”[p. 62] without robbing art of its integrity. Here again, I mention George Pattison’s “Art and Apologetics,”[1] and refer the reader to my 4-part series on “The Integrity of Using Art.”

Second, and with regard to “the medium and the message,” I wonder whether the fact that this approach “is necessarily less explicit” means that it “is necessarily less explicit in its gospel content.”[p. 64] I suppose it depends upon how one defines “gospel content.” For Campbell, “gospel content” seems to be synonymous with “preaching,”[p. 64; cf. 15-16] but this seems quite limited,[2] and ignores the conversation of the nature of non-verbal communication/experience, i.e., whether or not art is merely a visualized, or otherwise encoded, proposition that might just as easily be expressed otherwise and that has only one meaning determined by the author/artist, etc.

Finally, and with regard to Chapter 6, I wonder about the way that the conversation between artists and the Church has been framed. And here I refer to the reader to Dave Reinhardt and Sara Schumacher’s series on “The relationship between the Artist and the Church” (see the first post here). Suffice it to say that both parties are complicit, and, to appropriate Barth, “should be united in being able to think of it only with penitence which each expects of the other, but with the penitence in which – whatever may be the cost – each is willing to precede the other.”[3]

Readers interested in conversations having to do with evangelism and the arts might also be interested in the recently published Arts Ministry: Nurturing the Creative Life of God’s People by Michael J. Bauer (Grand Rapids, MI: Eerdmans, 2013, pp. 123-130 in particular). These are important conversations.

[1] George Pattison, “Art and Apologetics,” Modern Churchman, 32 no. 5 (1991): 24-30.
[2] As David Brown has argued: “Again, to take a quite different example, words should not be seen as pure in a way that the visual is not. Even the words of revelation are bound up with the earthly and the ordinarily human, and can only communicate through them. The possibility of corruption in the visual does not therefore automatically make it idolatrous, any more than word can in and of itself protect from such a sin. Instead, Christianity’s fixation with word needs to be challenged, and the impurity as well as the glory of the word-experience put on par with experiences of God mediated in other ways.” (David Brown, God and Enchantment of Place: Reclaiming Human Experience [Oxford: Oxford University Press, 2004], 402.) I don’t mean to say that Brown is right, though I am quite sympathetic; only that the conversation is more complex that Campbell lets on, the result of which is that “the issues” are not thought through as fully as they might have been.
[3] Karl Barth, Church Dogmatics IV.1, 675-676.