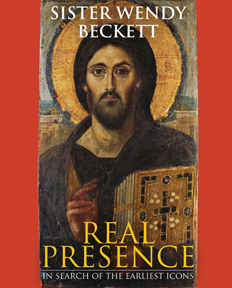 “Some time ago, to my astonishment, I discovered the eight icons of the Virgin that have survived from the sixth century,” is how Real Presence: In Search of the Earliest Icons by the art critic and cloistered nun, Sister Wendy Beckett begins, and it is astonished discovery that characterizes the energy and enthusiasm of the text and its author.

The book serves as a guided tour of five categories of icons dating from the “pre-iconoclastic” period, meaning those that survived the great purges of iconography that took place in the eighth and ninth centuries before the “Triumph of Orthodoxy” in 843. The tour begins in the depths of St. Catherine’s monastery in the Sinai Desert. Sister Wendy’s respect and identification with the ethos of the secluded life is clearly evident, and she effectively bridges this immersion in that life into those of her readers. She briefly introduces the intricacies of the scholarly debates within the art historical world about the archeological status of early icons, making particular reference to the pioneering work of Kurt Weitzmann of Princeton University. But while Weitzmann’s research highlighted the archeological value of every icon, Sister Wendy presents a decidedly more spiritual, even evangelical assessment of icons. For the purposes of this brief text, Sister Wendy focuses solely on those representative icons “to which I myself have responded,” and as this is a report of a spiritual quest, it is that response that is decisive for the intended impact of the text.

Sister Wendy defines an icon simply as “a sacred painting on wood, and is portable” [p. 5], and this portability is shown to be intrinsic to the meaning of icons. Such portability implies and facilitates an “intimacy” of purpose, a means of “personal piety.” The first of the categories of icons that the author reviews are those of Jesus. Sister Wendy reviews these icons along a categorization apparently familiar in her discipline, categories she refers to as “Classical,” “Semitic” and the “Prophetic,” typified in this case by the image of Jesus as the Ancient of Days. The first of the images presented is that of Christ Pantocrator and appears on the book cover. Her analysis of this particular image of Christ, which Sister Wendy refers to as the earliest surviving of its type, is characteristically fresh and provocative:

The books entitle it ‘Pantocrator’, Christ All Powerful, but that title was only given in the ninth century. Looking at it untitled, we see primarily a Christ who blesses, and in His other hand holds for us the bejeweled treasury of the Scriptures. This is a work of the utmost delicacy and subtlety. [24]

This passage highlights aspects of the author’s approach to this subject matter. For her, the titles and interpretations ascribed to these works sometimes obscure the message these sacred images convey. There is also an insinuation that these “pre-iconoclastic” works reflect a beauty and creativity that will, in her account, be diminished in the ensuing conservatism characteristic of iconography following the restoration of icons. Appreciative of the Eastern tradition, she nonetheless brings a Western eye to bear upon the selection of iconography she reviews.

Other icons of Jesus, as well as those of Mary, and early saints including Peter, Orthodox worthies, martyrs and desert monastics are reviewed. Her analysis of the icons of Mary and the infant Christ reflect again her insight into the evangelical intention of iconography: not the glorification of the Madonna but the presentation of Christ, and suggests ways in which the icons succeed in doing so.

The thrust of Sister Wendy’s analysis, as suggested by the title, is that icons effectively communicate not merely an aesthetic of spirituality, but a spiritual presence, a way of connecting with the realities they depict, “drawing us out of our earth into their heaven” [p. 104]. The book presents icons as means of grace, and these representative examples of early iconography as particularly potent windows from this world into another. One senses the presence also of an author who is of strong opinion and feels no particular need to flatter the art historical world, as appreciative and informed by it as she is. The uninformed reader is in the passenger seat of this ride, and where authorial conviction may run counter with considered opinion is a matter for the reader to find out on other excursions.

Written for the general reader in a conversational style that doesn’t wear it erudition on its sleeve, published in a gift-type publication replete with full colour reproductions of all the icons discussed in the text, this is a fine introduction to iconography and to Christian art in general.

Editor’s Note: This is the first of a three-part series on the relationship between the artist and the church. The second post will run…