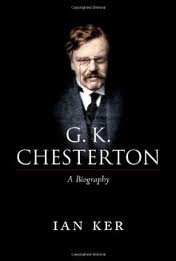 In recent years, there has been an exciting revival of scholarly interest in G. K. Chesterton as indicated by books such as William Oddie’s The Romance of Orthodoxy: The Making of GKC (Oxford UP, 2008), Alison Milbank’s Chesterton and Tolkien as Theologians (Continuum, 2007) and Aidan Nichols’ G. K. Chesterton: Theologian (DLT, 2009). Ian Ker’s new biography of Chesterton (Oxford UP), however, is probably the weightiest work on Chesterton to appear since Maisie Ward’s foundational biography in 1942. Indeed, on top of the physical weight of the book—with 747 pages and a hardback binding you don’t want to drop it on your toe—the weight of scholarly evidence and carefully researched support displayed is enough to ensure that Ker’s work will be essential to Chesterton studies for many years to come.

The book’s main argument is that Chesterton is best classified as a successor to the great Victorian sages such as Carlyle and Ruskin, but especially as the heir apparent to John Henry Newman, the famous convert to Catholicism and zealous defender of all things Roman (and about whom Ker has also written a biography). Chesterton’s novels, essays and short fiction are not, according to Ker, his best works; rather it is Chesterton’s criticism and apologetics that are truly great. Ker lists seven books that he considers to be Chesterton’s ‘great literary works’: Charles Dickens, Orthodoxy, The Victorian Age in Literature, St Francis of Assisi, The Everlasting Man, St Thomas Aquinas, and the Autobiography.  In addition to the usual biographical chronicling of births, deaths, marriages, jobs, friendships, and so forth, Ker’s book also contains extensive summaries of every major publication that came out during Chesterton’s lifetime, including his many collections of essays. In these summaries, Ker does an excellent job of highlighting key Chestertonian ideas and themes such as the intimate connection of seriousness and laughter and how limits are essential to thought and creativity.

The narrative of Chesterton’s life is rich with details that will give fresh insight to even the most avid fan. Anyone who has read the Autobiography will remember the hilarious story of how when Chesterton had Henry James over to tea, Hillaire Belloc, having just tramped his way back to England from France, turned up unannounced and ‘burst in upon the balanced tea-cup and tentative sentence of Henry James’. Chesterton says that he was ‘always haunted by the contradictions of that comedy’: the proper and precise European-loving American and the wild, bedraggled and ravenous MP. To this story, Ker adds the reflections of not only Henry James but also those of William James and H. G. Wells. William James wanted to catch a glimpse of Chesterton and so had a set of stairs placed so that he could peep over the garden wall, but he was caught by his more formal brother who told him emphatically that ‘it was the sort of thing that wasn’t done’.

Whilst the biography covers all periods and aspects of Chesterton’s life, it is heavily weighted toward the latter part of Chesterton’s life, and it is most particularly interested in Chesterton’s Roman Catholicism. Readers that primarily want to know about Chesterton’s early life might be more interested in William Oddie’s The Romance of Orthodoxy for Ker seems to rely largely upon this work and the Autobiography for the first 30 years or so of Chesterton’s life. The chapter sizes grow as the book progresses as does the diversity of sources and material. One of the highlights is discovering Chesterton’s incredible generosity to beggars, strangers and enemies and in hearing about his love of children and his ability to engage with them as equals. Sadly, however, the extra depth is not always interesting. Chesterton’s conversion to Roman Catholicism, for example, is one of the most tedious parts of the book as Ker includes every passing reference that Chesterton made to Roman Catholicism in his letters over the course of a decade. Also fairly dry are the accounts of Chesterton’s travels to America, Rome and Jerusalem, for Ker includes lots of information such as: ‘the 2.30 train took them to Dayton where they arrived at 11.30’ (445).

Yet the most striking thing about the book is that it is not very Chestertonian. This is not necessarily a criticism, as Chesterton’s lack of attention to detail and his haphazard way of quoting material can infuriate anyone who likes a degree of precision. Even so, there is something slightly odd about a systematic and somewhat ponderous book on a man who is best known for his brevity, wit and lightning lucidity.  Perhaps it is just the unconscious desire that a biography should in some way summon the spirit of its subject. One also wonders if Chesterton would agree with Ker’s argument that Chesterton was more a Victorian sage and defender of the faith than a ‘jolly journalist’. In light of Chesterton’s own frequent and vehement defence of the common man, laughter, and all forms of popular literature, it is strange the Ker should seek to elevate Chesterton’s more evidently ‘serious’ works of intellectual criticism over his detective stories, fairytales, short essays, and light poetry. As Chesterton himself points out: ‘it is much easier to write a good Times leading article than a good joke in Punch, for solemnity flows out of men naturally; but laughter is a leap’.

Nevertheless this biography fills an enormous scholarly gap and has set a high standard for all future Chesterton studies. The wealth of material provided is worth the occasional dry spell. Ker’s portrait of Chesterton may be gargantuan but then so was GKC.

Danny Gabelman teaches English at Eastbourne College in East Sussex. He completed his PhD on George MacDonald's fairytale levity at the University of St Andrews in the Institute for Theology, Imagination and the Arts (ITIA). His thesis was published under the title, George MacDonald: Divine Carelessness and Fairytale Levity (Baylor University Press, 2013).

God is so great that all things give Him glory if you mean they should. So then, my brethren, Live. – Gerard Manley Hopkins…