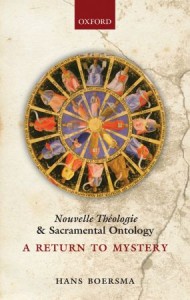 Seeking to reconnect theology and everyday experience, Daniélou advocated “ressourcement … a return to the Bible, the Church Fathers, and the liturgy.”[p. 5] And what did he hope to gain?  A sacramental ontology, which Boersma convincingly argues is “the key to understanding nouvelle théologie.”[p. 2] In the chapters that follow, Boersma walks the reader through nouvelle théologie’s theological predecessors and chief proponents before calling for “a study of the overall impact of nouvelle théologie.”[p. 289] Boersma concludes:

By focusing on the Eucharist as a fellowship meal, much contemporary Protestantism, and evangelicalism in particular, tends to ignore the sacramental basis (sacramentum) of the Church’s unity. None the less, from the perspective of communion ecclesiology, both neo-Thomists and evangelical Protestants tend to separate the sacrament and its reality (though the former focus on the sacrament and the latter on the reality). Despite their different context, therefore, contemporary Protestants do have much to gain from an appropriation of [Henri] de Lubac’s and [Yves] Congar’s reintegration of the sacrament with its mystical reality. In short, spiritual interpretation, reintegration of Scripture and Tradition, and communion ecclesiology are among the most urgently required means to advance the unity of the Church.[p. 294]

There is no doubt that this is a fine work, thoroughly researched and convincingly argued. It will no doubt be of interest to readers of Boersma’s Heavenly Participation: The Weaving of a Sacramental Tapestry (Grand Rapids: Eerdmans, 2011).  That said, it’s disappointing to see a publisher like Oxford University Press using print-on-demand services that fail to deliver a quality product. I received this review copy, a casewrap with a warped cover and sub-standard binding, from Oxford via Lightning Source, and though I did not pay for my copy, readers who pay £65.00/$130.00 are right to expect a well-crafted book, one with a fine binding that stands up to repeated reading.