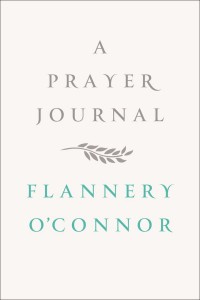 In fact, the permission to breach O’Connor’s private conversation with God is in A Prayer Journal itself. One persistent request to God is that her work as a writer be a thing of grace for the world. She was unsure how she was going to do as a writer, but she was determined that her work would be at the disposition of the Divine plan. As she notes early on in the journal, “Give me a strong will to be able to bend it to the Will of the Father.”

Reading this book was a grace for me as a writer and particularly as one who is a serious Catholic. It will be a grace to anyone who wants to put his or her talents to use to make a difference in the world. To non-writers, it gives every one of us permission to speak frankly to God without proper prose and affectation. The Prayer Journal is not in itself a work of genius, but it is engrossing as the intimate, unpretentious thoughts of a budding genius. It is inspiring in its unconsciousness, because it shows that mastery of craft united to a pastoral care for the world don’t just happen, but are the fruit of fervent desire and humility.

In A Prayer Journal, young Mary Flannery has no conviction at all of attaining to literary stardom. The woman who would become probably the greatest short story writer ever begins her career by wrestling with the horror of being mediocre. In the too often parched, banal contemporary culture which seems mainly concerned with championing the sensibilities of the unachieving, Flannery’s bold aspiration to be a great writer pours out like a long glass of delicious cool champagne.

Flannery also worries that her writing will lead people away from God instead of towards Him. It shows she knew that her themes were going to be very high stakes, and that meaning well doesn’t necessarily mean doing well. It also shows she had already figured out that she couldn’t show the power of the resurrection in her stories without dragging her readers through the potentially scandalizing places of fetishistic Bible salesmen, acne-scarred Yankee crazy women, and bitter old men clinging to the N-word. Her prayers for the impact of her writing make for some of the most charming and thought-provoking parts of the book: “Please let Christian principles permeate my writing, and please let there be enough of my writing (published) for Christian principles to permeate.” Or again, after having acknowledged the mysterious way in which God “gave” her a story, she writes, “I can’t write a thing. But I’ll continue to try… I wonder if God will ever do any more writing for me.”

For those worshipful fans of Flannery who just want to uncover a few more searing Southerny sayings to haunt your comings and goings, there are several here. They aren’t as polished as those we are used to from her stories, but the fact that she wasn’t writing for anybody but herself and God makes them that much more impressive. Young Flannery effortlessly importunes God, “Please help me to get down under things and find You where You are.” As regards the Kingdom of God, she creates the perfect parallel formulation, “I don’t want to fear to be out. I want to love to be in.” Has anybody ever rejected sentimentality with better imagery than, “[We] have lost our power to vomit”? I thought several times reading these kind of instinctively artful marriages of style and substance, “Talent is a thing. And wondrous.”

A Prayer Journal shows that she already understood at twenty the need for a ponderous and unifying “big idea” in a story, noting, “To maintain any thread in a novel, there must be a view of the world behind it.” O’Connor’s “view of the world” was that good things were only possible through the direct, conscious and gratuitous action of God in human life. In the compilation of O’Connor’s speeches and essays on writing, Mystery and Manners, the taciturn one tosses off in a speech that “my subject in fiction is the action of grace in territory largely held by the devil.” It is the story she can’t get over, that she tells over and over and over. In only thirty-seven short and often partial pages, A Prayer Journal references grace twenty times. Also evident in A Prayer Journal is that O’Connor has already figured out that grace and suffering are inextricably linked. Later in Mystery and Manners she confirms her youthful theories with the note, “I find that suffering uniquely prepares my characters for their moments of grace.”

O’Connor’s challenge to all of us, to find the saving action of God in whatever damn thing afflicts us, is the outrageous and irresistible key to her fiction. A Prayer Journal assures us that before she sentenced her characters to suffer on their way to salvation, she gave God permission to first and foremost have His way with her, as “[s]upernatural grace that does whatever it does.” It is impossible to read this offer from the young writer without being mindful of how lupus would in a few short years begin to have its way with her, culminating in a terribly premature death at thirty-nine. Like the unconscious acts of so many of her future characters, A Prayer Journal was the divinely inspired preparation for O’Connor to embrace the purification of her suffering. May it be the same for all of us who pick it up greedily or just to satisfy our curiosity. Grace can work with that.

Music and Transcendence.  Edited by Férdia J. Stone-Davis. Ashgate: Farnham (Surrey), 2015. £65/$93.80 This collection of essays, based on a prior conference of the…