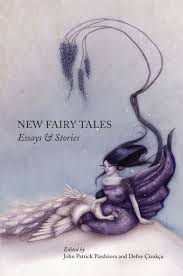 Author pages (unnumbered pages 432-437 in effect) provide a valuable initial guide to the nationalities and locations of the contributors. The two largest groups (which also provide the editors) are related to the University of Glasgow (under David Jasper’s leadership with a distinguished track-record in the religion-literature field); and the University of St Andrews, whose department of English and the Institute for Theology, Imagination and the Arts both foster publication with significant overlaps in theology and literature.

Paying tribute to their predecessors the editors define the question upon which their anthology is focussed: ‘not only what a new fairy tale is, but perhaps more importantly how new fairy tales are made’ (ix). As an initial perception, we may follow them in judging that ‘the timelessness and temporal’ together create ‘the frisson’ of the new tale and the power of its inception’ (xii). Divided into five sections the anthology offers it reader a thorough treatment of Miniatures, Storytellers, Shadows and Reflections, Fairy Brides, and Fairy Tale Pedagogy.

Within these categories readers may find academic essays analysing new tales; actual examples in both poetry and prose; and ‘process’ essays on the actual craft of writing. Some of these could have been placed in different sections, – editors sometimes have to make shift to justify why some essays are to be found where they are! Overall a non-Western ‘turn’ is particularly refreshing, with the sections on ‘Storytellers’ and ‘Fairy Brides’ particularly valuable.

Only one essay – on ‘Fairy-Tales in Hebrew Nowadays’ is likely to leave readers with a sense of frustration since all but a couple of the references are to work in Hebrew, alas, and for most of the readers of the volume probably beyond pursuit. This section of the book, however, also includes a profoundly moving essay by one of the editors, Defne Çizakça, on the cultures of ‘meddah‘ tales from the multitude of ethnic groups from the former Ottoman Empire (127-128). This essay in particular raises important questions about how much of the story-teller’s art cannot be transferred to writing in any other culture – such may be its ‘unplanned’ elements, the ability to act out character types, to change facial expression, and to mimic the sounds of the natural world.

In the essay ‘Oh, You Wicked Storytellers’ John Pazdziora excellently exhibits how a story-teller may become a character in his own right, not least when his world is one of anarchy and ‘riotous mayhem’ and so perhaps takes readers beyond a kind of security they might expect from a ‘fairy-tale’ (189). And the same might be said of ‘Fairy Brides’, which includes some unnerving tales from Japanese culture, and a sustained post-Dante reflection which moves through the somewhat gruesome to a near-vision of delight.

In such an engaging anthology perhaps my only desire is that the talents and insights of the authors in this volume could be transferred to the ways in which theology is studied and developed!