This collection of essays, based on a prior conference of the same title, brings into light potentially new ideas for readers versed in the overlapping fields of music, theology and philosophy, but would serve equally well as a lucid and inspiring introduction to this particular constellation of disciplines.

The term ‘transcendence’ is complicated by two different definitions: it can be considered ‘absolute’, ‘vertical’, the ‘ultimate, external and otherworldly source’ (p.1) that orders the universe; it might also be seen as ‘immanent’, considered generally as a subjective, experiential phenomenon. After outlining this important distinction and the quality of ‘alterity’, otherness, shared by both definitions of transcendence, the editor highlights what is to be the central point of the collection: ‘music is enmeshed in the […] conceptions of absolute and immanent transcendence, both in terms of its practice and the ways in which it is theorised’ (p.4), and that ‘it pursues a course that is transversal’, ‘unsettl[ing] any simple divisions’ (p.4) between the vertical and horizontal conceptions of transcendence.

The first half of the collection, focusing on ‘Absolute Transcendence’, begins with Christopher Page’s analysis of a Medieval model of musical transcendence in Gregorian chant. He discusses how musical notation was invented by Guido d’Arrezzo, saving the time spent learning tunes by heart for monks so they could cultivate greater holiness. In some senses, in this context, music was seen to offer a rather rarefied kind of transcendence. Page writes of how, at the time, ‘troubling dreams and phantasmata [would] sully the body in the hours of nocturnal prayer and have effects that are worse still in sleep’ (p.19). 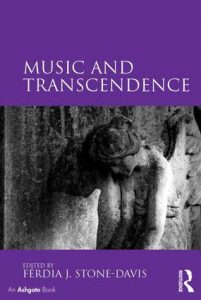 A rather different view of the eros, sleep and music is presented in Sukanya Sarbadhikary’s discussion of Indian devotional and musical practices in the subsequent chapter, which suggests that ‘the structure of music does not merely replace or express but generates a sexual aura’. Music penetrates the ear even in sleep, and, according to a Vaishnavian proverb, ‘in chanting itself will eros be found’. Sarbadhikary discusses how the practice of kirtan singing can be seen as a ‘sonic bath’, and more generally the physicality of the practice, instruments corresponding to certain body parts.

The next chapters emphasise the unique structural freedom that music, in comparison to other art forms, seems to offer. John Habron outlines the composer Ferrucio Busoni’s intensely idealistic musical philosophy, which, also in contrast to the Franciscan monks’ valuation of preparedness and devotion, emphasises the virtues of play and childlikeness in breaking boundaries and coming towards a timeless, eternal present, the ‘momentarily lasting’. In finding the ultimate, Ur-Musik, Busoni highlighted not the decided and climactic, but rather the transitional passages in works by Beethoven, Brahms and Schumann and Bach.

Bringing music into a different shape of dialogue with theology, Bruce Ellis Benson’s chapter uses improvisational, jazz principles to critique and mould the Christian doctrine of creation. Using Jean-Louis Chrétien’s conceptualisation of creation as call and response, working with pre-existent material rather than dominating creations which had formerly been nothing, makes for a theology more acceptable to feminist and liberation theologians, as well as better befitting a religion focused around a kenotic figure. Russell Re Manning affords maximum potential to the notions of freedom and improvisation in the next chapter, which follows George Steiner’s consideration of the possibility of ‘unwritten theology’, a state without words, to allow art to shape doctrine and communicate uniquely as a form of natural theology.

Like Re Manning, Roger Scruton investigates how musical experience might lead to a sense of the transcendent or absolute. Music becomes an aid in ‘effing the ineffable’, he suggests, ‘when the ineffable is the non-propositional content of our states of mind’, though it ‘cannot eff what lies beyond human acquaintance entirely’ (pp.80-81). Scruton’s definition of the transcendent allows, however, for a qualified kind of knowledge – that ‘by acquaintance’ rather than that of description (p.79). Art, he suggests, ‘draws our attention to things, without reducing them to examples of some general category’; it ‘shows, presents, the individual, standing forth from the integument of our concepts in a naked completeness’ (79). He draws attention, worthily, to Brahms’s concept of Feldeinsamkeit, uniqueness in one’s field, as an example of how, in art, form might become inseparable from content. Relational knowledge exists in seeking out the ‘I’ in you’ (p.81); in a similar way, perhaps, ‘music can put us in the presence of something that has no place in this world’, yet ‘it can do this in a way that seems both orderly and personal’ (p.81).

Also considering transcendence phenomenologically, Jonas Lundblad outlines Friedrich Schleiermacher’s concept of ‘immediacy’ in the next chapter, ‘a holistic unity with external reality’, whereby ‘sense and its objects have, as it were, flowed into one another and become one, before both turn back to their original position’ (p.87). This is an experience, Lundblad argues, that Schleiermacher saw as crucial to art and religion alike.

Moving away from what seem to have been increasing flirtations with the subjective, Jeremy Begbie provides a circumspect but welcome theological caveat in his chapter, suggesting that there is ‘a type of transcendence that cannot be designed or mapped out a priori’: that of ‘God’s own self-presentation’ (p.108). It is worth remembering the ‘widespread tendency to philosophise (or theologise) within frameworks determined by a priorix conceptions of human limits’, which might seem to limit God’s transcendence (p.106). Begbie’s assertion that ‘the sublime’ is a ‘pale and inert quasi-divinity’ (p.108) might, however, attract its own challenges; the value of risking ‘mere wish-fulfilment’ defended against his fixed, scriptural definition of the divine. Yet he commendably iterates an important, overarching claim evidenced abundantly by this very collection: ‘there is an ineradicable, perhaps even essential, link between music and transcendence’ (p.105). 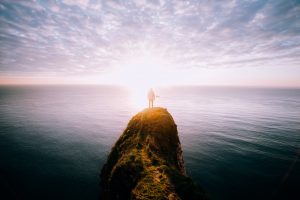 The essays focusing on ‘Immanent Transcendence’ begin with Joshua A.Waggener’s persuasive comparison of Rudolf Otto’s principle of ‘the Holy’, well-explained here, to a composition by C. P. E. Bach. Waggener shows that such a comparison is limited: Bach’s ending is unrelentingly triumphant, omitting any acknowledgement of human fallibility, inadequacy and the need for transformation. Exploring this difference reveals an important ultimate point of Otto’s about the arts and the transcendent, ‘distingish[ing] the experience of aesthetic sublimity from ‘religious feelings’’ (p.123).

The editor’s own chapter identifies a perhaps more wholly promising capacity of music for ‘world-making’, which she defines as ‘attempts to make sense of the human person, the environment in which she is situated, and the environment between the two’ (p.126). Music, argues Férdia J. Stone-Davis, ‘forms an active component of and force within culture’, because it ‘can be understood as a border or liminal practice due to its reliance upon thresholds’ (p.129). Haydn’s String Quartet in Eb major, ending with a particularly noticeable melodic ‘joke’, serves as an apt example of the importance of the ‘process of going beyond and being set in relation, which allows the subject to in-dwell a musical process’ (p.144). Through this, ‘aspects of the musical environment become apparent, and ‘the subject is able to make sense of what is presented and that musical place is generated’ (p.144).

In the next chapter, Diane V. Silverthorne writes about the idea of the artist as genius in the staging of the ‘Klinger: Beethoven Exhibition’ in fin de siècle Vienna. Particularly interesting is her close relating of the work to Wagner’s principle of the Gesamtkunstwerk – his ideal piece incorporating music, drama and visual arts together, but privileging music: ‘music, sculpture, painting and a singular, designated space devoted to an overriding musical idea’ (p.153).

Next, Thomas Mulherin offers an interesting new reading of E. T. A. Hoffman’s apparently contradictory philosophy of music, identifying an ironic tone from the writer’s mock-critical writerly persona Johannes Kreisler in writing that music reveals the heavenly and unfathomable in an lofty, otherworldly, remotely transcendent direction. Rather, it seems more likely that ‘the unknown world revealed to the understanding listener of Beethoven’s Fifth Symphony is best understood as the natural world, the connection to which is established through musical form’ (p.175): a fascinating philosophy of music to consider. Oane Reitsma then applies the theorist Hans-Georg Gadamer’s conceptualisation of the childlike exercise of play to instrumental music, which absorbs all participants (including audiences) in a moment that is transcendent in its mesmerising immanence.

The final two chapters of the collection consider musical ‘immanent transcendence’ the most theoretically. Christopher Norris draws on the thought of Alain Badiou to define, aptly, though it appears at first to be a contradiction, a ‘transient ontology’, an ‘inaesthetics’ of music even in the case of the most temporally rooted of examples, the political song. The strange combination of music and text that allows a piece, sometimes, to become a ‘classic’, but certainly to ‘express or give forms to truths that ‘inexist’ – that lack as yet any adequate means of conceptual articulation – yet which may nonetheless be signified obliquely by those gaps, anomalies or absences of formal closure that art is best able to reveal’ (p.209). On a similar note, Andrew Bowie offers some final thoughts on how the arts, especially music, might enlighten us to philosophical truths through a very different language system to the usual one of philosophers, that can reveal truth more intuitively and immediately, in instant participation, than rational language does.

Each chapter offers an ambitiously aimed argument, and in the main, a well-poised one, making this collection an extremely productive way of stimulating thought on the subject. For this reader, with an interest in meaningful paradigms for the arts and artistic challenges to theology, the most especially inspiring suggestions seemed to be those made by Benson, Re Manning, Stone Davis and Reitsma. These ideas seem to hold especial potential for exploring and testing for their ability to cast light on other, particular artistic works. Yet it also, in its interdisciplinary beauty, offers new prospects for aestheticians, historians, ethnomusicologists, and certainly also brings home a fruitful comparison for those interested in art forms other than music.