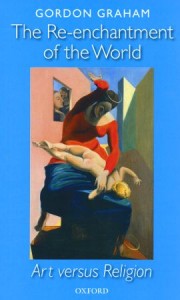 This book is the published version of Graham’s 2005 Stanton Lectures in the Philosophy of Religion delivered at the University of Cambridge. He begins: “One way of summarizing the issue this book addresses would be as follows: can human beings find a properly encompassing vocation in art or the aesthetic?”[p. 8] Put simply: can art replace religion?

The short answer? No. Graham explains:

Painting alone will never let us see the sacred; fiction as such provides no cosmic pattern of life; music alone has developed in a direction that eliminates the Dionysian altogether. And, while we can build ourselves a different type of sacred space, we lack the right kind of festival with which to fill it. In short, the abandonment of religion, it seems, must mean the permanent disenchantment of the world, and any ambition on the part of art to remedy this is doomed to failure.[p. 186]

Here, Graham sounds a bit like William Desmond, and together they would, it seems, oppose someone like Jeffrey L. Kosky who in his Arts of Wonder: Enchanting Secularity–Walter De Maria, Diller + Scofidio, James Turrell, Andy Goldsworthy has argued “that one need not look only to traditional religion or religious traditions for refuge from the vicissitudes of human being in the world set up by modern disenchantment.”[Kosky, xiii] Positively, Graham covers a broad range of material, and even if the text wanders at points, he makes his point: autonomous art cannot replace religion. A helpful, and for the most part accessible, introduction to the conversation. 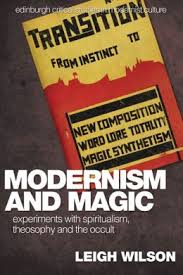 The point of departure for this scholarly monograph is “the troubling gap between words and the world,”[p. 69] a crisis felt by many of those engaged in the modernist literary project. For specialists who feel similarly, Leigh Wilson offers a highly individual account of a characteristically modern “magical mimesis” wherein “the reproduction of the world does not merely confirm the world as it is, but in the very act of copying it creates the possibilities for the world to exist otherwise.”[p. 104]

If the reader’s instincts question how the copy of a thing is actually meant to “transform the original,”p. 56] she also might share my uncertainty about the coherence of this fundamental claim. It would seem that the author wishes to have it two ways. On the one hand, “magic is a discourse of the material world rather than necessarily related to the metaphysical or transcendent.”[p. 4] On the other, modernism “needed the magical practices at the heart of contemporary occult discourses in order . . . to bring into existence a space that could transform the world.”[p. 16] Yet, common sense asks, do the words of the occultists – e.g., the séance-goer’s plain-as-day affirmation, “Yes, I saw a ghost” – truly signify anything above or beyond the material?

This simple question haunts the book, and considerable pain has been taken, and inflicted, to avoid it. If it is, truly, “in writing specifically, in its materiality, that the non-transcendence of language becomes apparent,” and if modernist writers were, indeed, “painfully aware of the linguistic crisis which challenged language’s ability to describe the world and so threatened to sunder language from the world,” it does not seem a very satisfactory solution to simply “collapse . . . [the] identity between representation and the thing in the world being represented.”[p. 56] To call “Bob the Cat” precisely the thing that is my family’s furry feline, and to name this identity between signifier and signified “the centre of magic,”[p. 56] does not feel like a profound philosophical discovery. It feels rather like a bit of linguistic hand-waving.

But perhaps I have misunderstood. Perhaps it is not the case that the author herself operates under the same cramped metaphysics that fettered the subjects of her study. Perhaps she is free therefore to offer a perspective, in some sense, outside the “self-conscious drawing of attention to their own artificiality . . . [which is] the defining characteristic of modernism.”[p. 18] Perhaps this study presents an ingenious innovative comprehensively-immanent account of “modernist remaking[s] of religious experience.”[p. 63]  Yet if it does, the ink scratches on the pages do not signify as much to this reader.  He will have to look beyond.