In this compelling collaboration between an artist and a theologian, Jonathan A. Anderson and William A. Dyrness begin a conversation about how Christian artists, critics, enthusiasts and theologians can reclaim and rediscover modern art, identifying and celebrating its religious and spiritual impulses. 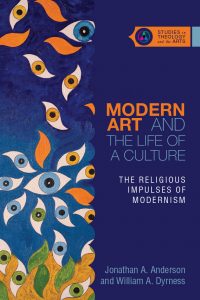 For the past four decades there has been one dominant voice in Christian critical thought concerning the art of modernism, that of Dutch art historian Hans Rookmaaker (1922-1977). Rookmaaker’s influential text, Modern Art and the Death of a Culture (1970), ‘pits modernism’s avant-garde against modernity’s scientific rationalism, faults both of them for harbouring an inescapable nihilism and then posits (Reformed) Christianity as the only viable ground for a third way’. (62)

While describing themselves as ‘Children of Rookmaaker’, Anderson and Dyrness have written a text that stands as a direct riposte to his work. As their contrasting titles suggest, where Rookmaaker saw only vacuity, mockery and existential despair, Anderson and Dyrness find faith, Christian imagery and genuine spiritual longing.

After two introductory chapters, the majority of the book is taken up with five chapters of Geographies, Histories and Encounters. These cover similar ground to Rookmaaker as they chart movements and artists between the Enlightenment and the 1970s in Britain and France, Northern Europe, Russia and North America. Their aim is both a ‘modestly revisionist account of the history of modern art’ and also to engage with Christian scholars who have offered theological interpretations of the history of modern art.

In each of these five chapters, Anderson and Dyrness look at the individual artists and the ways in which their work was shaped by their personal faith and their Christian upbringings. Even though many artists were ambivalent to the faith of their childhood, the overwhelming influence of Catholicism on Picasso, Cézanne and Warhol, Orthodoxy on Kandinsky and Gonchrova and Protestantism on Van Gogh, Mondrain and Rauschenberg (to name but a few) are examined in illuminating detail in these central chapters.

In his Afterword, Daniel A. Siedell comments that abstract works ‘cannot “stand on their own” but require what the artist says about them or what an authoritative critic tells us about them to give them significance’. (335) As well as identifying the religious influences on the artists, Anderson and Dyrness take up the mantle of the authoritative critic themselves, examining the works, identifying visual elements and painting techniques and reading spiritual meaning in the work. 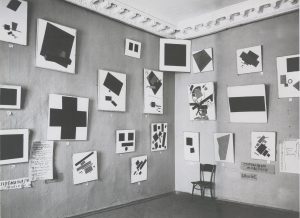 Among this geographical survey of modern art, the most arresting chapter is where Anderson and Dyrness depart most radically from Rookmaaker by seeing spiritual resonance in Russian Icons, Dada Liturgies and Rumours of Nihilism (Chapter Five). Publicity for Tate Modern’s 2014 retrospective of Kazimir Malevich foregrounded his Black Square (1915) calling it ‘the Mona Lisa of modern art’. This work was exhibited high in the corner of the room, in a way that mimicked its placement in Malevich’s original 1915 show, The Last Futurist Exhibition of Paintings 0.10 (Zero-Ten).

Vasily Kandinsky (whose own work is examined in Chapter Four) is quoted in Chapter Five for his descriptions of the ‘great wooden houses’ in the Russian province of Vologda, where he spent time as an ethnography student. The walls of these houses were filled with paintings, all of which moved the viewer to the ‘beautiful corner’ or ‘red corner’ which displayed the most important icon, high against the ceiling and illuminated by red pendant lamps. The significance of the arrangement in The Last Futurist Exhibition was not lost on the symbolist Alexandre Benois who responded to the exhibition saying:

Without a number but high up in a corner just below the ceiling in the holy place, is hung a ‘work’ undoubtedly by the same Malevich, representing a black square against a white background. There can be no doubt that this is an ‘icon’. (209-10)

Drawing additional evidence from the black halos which Malevich painted on figures in his more religiously explicit work and his own descriptions of the work, Anderson and Dyrness ask whether Black Square is

an icon of the death of God or an icon of God’s unrepresentability? Has the holy corner been appropriated for mockery, lament or apophatic meditation? Is this an act of modernist hubris or theoaesthetic humility? (213) 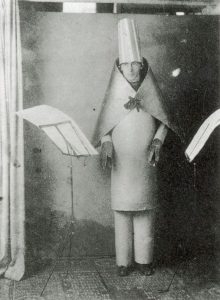 Anderson and Dyrness take a similarly revisionist approach to the work of Hugo Ball and the Dadaist Cabaret Voltaire in Zurich in 1916. Rookmaaker regarded Dada as ‘a nihilistic, destructive movement of anti-art, anti-philosophy … a new gnosticism, proclaiming that this world is without meaning or sense, that the world is evil—but with no God to reach out to’. (226) Anderson and Dyrness recognise that within Christian circles the movement is seen as ‘a tragic convergence (or inverted apotheosis) of everything this is most problematic about the post-Christian avant-garde’. (226)

Within the inharmonious cacophony of instruments and spoken ‘sound poetry’ in the Cabaret Voltaire however, our authors see a spiritual rebuke to the inhumanity and brutality of the First World War, particularly noting that Ball’s Krippenspiel (Nativity Play) ‘situated the brutality of the war within a theological framework, rendering a palpable image of human violence having “bloodied and soiled the good God”’ (233).

Modern Art ends with a brief epilogue from the authors and the afterword from Siedell. This chapter asks whether the evangelical church has been guilty of uncritically following Rookmaaker and understanding modern art in the wrong way. Siedell goes on to ask if we might have made a similar error in our assessment of ‘more popular and more influential cultural artefacts’ such as music, film and television.

Siedell’s manifesto, in accord with Anderson and Dyrness, is that the world might just need Christian artists and cultural critics who think theologically about their experience before works of art [and] who through their language, the words they use, give life to those works of art. (338)

Modern Art is the first book in the IVP Studies in Theology and the Arts series. The third book in the series Contemporary Art and the Church (published June 2017) appears to pick up where Anderson and Dyrness leave off, in 1970 when Rookmaaker was published. Modern Art is a stimulating and promising start to the series as it begins to anticipate the ways in which the conversation between theology and the arts could ‘have a reflexive influence on the religious traditions themselves’. (328)

Jon J. Marlow is currently studying for a Doctorate in Theology and Ministry at Durham University. His research explores Christian communication in a visual culture, particularly asking how ministers in the Church of England are equipped to communicate Christ as both Ikon (Image) and Logos (Word). As Vicar of St Pancras Church, Plymouth, he aims to put theory into practice, using fine art, video and photography to communicate spiritual truth.