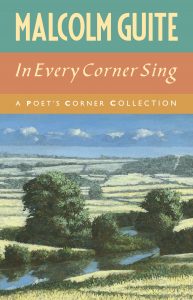 Reverend Dr. Malcolm Guite’s poetic spirit is not only found in his well-known sonnets, as evidenced by his most recent book of prose, In Every Corner Sing. In this collection of short pieces from his Church Times column, Poet’s Corner, Guite—poet and singer-songwriter as well as the Chaplain of Girton College, Cambridge—unravels and knits together, unearths and plants contemplative glimpses of everyday life, prompting broader questions in a thoughtful, conversational manner. Much like the river Granta he describes in the second column, ‘Upstream’, Guite’s writing ‘div[es] in and out of cover and emerg[es] to surprise me, like a very young child playing peek-a-boo’. [1] In prose infused with delightful turns of phrase and incisive observations, Guite invites us to sit and listen to the soft brook-babbling of images and encounters, to listen to ‘every corner sing’.

At roughly two to three pages each, these brief snapshots from Guite’s perspective—of Cambridge, of London, of various cities in North America, of the global or historical church and the local community alike—can be easily touched on singly throughout the day or week, or just as easily wholly devoured in one sitting. Finely weaving together theological and social reflections with rich natural and urban images, In Every Corner Sing calls the reader over to observe the small and beautiful, but also to observe the ripples of tragedy and pain. In ‘Rage and Beauty’, Guite recalls the 2017 terrorist attack at Borough Market in London with the pain of reconciling a world that could offer both beautiful poetry and horrific death; poignantly, he ‘found [himself] as utterly open to the shock and horror of those woundings [he] had missed by minutes as [he] had been to the lucent beauty of Credenhill’. [2] By glancing back at such an internationally felt occurrence, or noting in sadness the evidence of local drug abuse (as in the very first essay, ‘Eternity’), or reflecting on peaceful, pastoral walks through English farmlands and villages, each piece beckons us to focus our attention on and feel deeply all that which surrounds us, tragic and lovely. As the American psychologist M. Scott Peck proffered, ‘love’ is a ‘work of attention’, and Guite’s essays support this workable definition by suffusing memories and daily routines with a loving mindfulness. [3]

Being attentive in this fashion, Guite reveals, is not limited to abstract thought projects, but also allows for a more grounded and physical focus. In ‘God Speed the Plough’, he recalls being asked to bless a plough at a farm in Essex, after which he reflects that he’s not sure ‘how [the theologians and the philosophers] would discern the difference that a blessing makes’, but that he does ‘know that, somehow, that farmer would turn the soil of God’s good ground with a renewed sense of blessings, and the gardeners return to their gardens with a new awareness, for I felt it, too’. [4] Each moment in which we are given the space for a breath, for a blink, to spy a sparkling dewdrop or crack open a musty old book, to sit with an old friend or a new one, or to put our hands and minds to work with pens or ploughs—Guite invites us to return to our ‘gardens’, wherever and whatever they may be, with awareness.