Among the various events taking place in October 2017 in St Andrews to mark the 500th anniversary of Luther’s posting of his famous ‘ninety-five theses’, one of the most welcome is the release of a new CD, Luthersche Leidensmusik, published on the Sanctiandree label. [1]

University Organist and Director of Chapel Choirs, Tom Wilkinson, has researched and masterminded this project, and the result is superlative. He directs St Salvator’s Chapel Choir and the Kellie Consort in a well-devised programme of 16th– and 17th-century Lutheran church music proper to Lent, Passiontide and Easter.

The music is presented largely chronologically; the earliest Lutheran composer represented is Johann Walter who in 1524 produced and edited the first Protestant hymnal for choir; this includes a preface by Luther himself. The recording offers choral music by the well-known Michael Praetorius, the little-known Balthasar Resinarius—an important figure in the first generation of Protestant composers—and moves on to the more familiar names of Heinrich Schütz, Nikolaus Bruhns (perhaps familiar only to organists) and Dietrich Buxtehude. 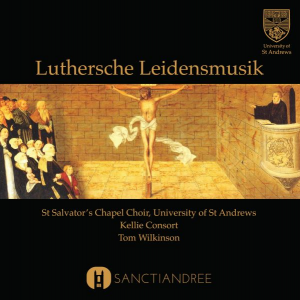 It was an inspiring idea to begin the CD with an organ improvisation on the great Lutheran hymn ‘Ein fest Burg’. This is played by Sean Heath (a PhD student in St Andrews and Keyboardist in Residence) and effectively captures the style of 17th-century organ composers such as Heinrich Scheidemann and Samuel Scheidt, offering a movement of real coherence. He plays on the 2014 Marc Garnier organ in the Elgar Concert Hall, University of Birmingham, a fine new instrument with the correct ‘period’ sound for this music. As Wilkinson’s liner note says of liturgical organ playing during the Lutheran period, ‘improvisation was not part of the tradition, it was the tradition’.

Later on the CD, Sean Heath plays a short organ chorale on ‘Aus tiefer Not’ (not the melody usually associated with this text) by Hans Kotter, which is evidently the earliest chorale prelude, beginning a long tradition which survives to this day.  We hear also Heinrich Scheidemann’s four-verse organ chorale, ‘Es spricht der Unweisen Mund wohl’, colourfully played on the Garnier organ.

Appropriately, the first vocal piece on the CD, following the improvisation, is Michael Praetorius’s vigorous unaccompanied setting of ‘Ein feste Burg’, which is given an engaging performance by St Salvator’s Choir; the sound is fresh, alert and full-bodied. Interestingly, they chose to record the vocal music in St Salvador’s Church in Dundee, perhaps acoustically more sympathetic than St Salvator’s Chapel. We hear the familiar ‘Aus tiefer Not’ melody sung unaccompanied, which was often the custom in Luther’s time; he permitted organs in worship, but not necessary to accompany congregational singing, which is what we expect.   The composer Resinarius, to whose music I was pleased to be introduced, is represented by his setting of the chorale, ‘Es spricht der Unweisen Mund wohl’. This piece involves a double canon; such artifice can of course be seen in later Lutheran composers, most notably J.S. Bach himself who believed that he was glorifying God to the very best of his ability by using his musical talents in this way.

When in his 20s, the long-lived Heinrich Schütz had studied with Giovanni Gabrieli in Venice and had brought back elements of Italian style which he incorporated into German liturgical music of the period: most significantly, the idea of devising music which puts the words across as vividly as possible. Schütz is represented by two continuo-accompanied motets, first the dramatic and declamatory, ‘Aus der Tiefe ruf ich, Herr’ (Psalm 130), and then a setting of ‘Kyrie Gott Vater in Ewigkeit’, a Lutheran troped version of the Kyrie which had appeared in 1545. Both are given strong performances by the choir.

Nikolaus Bruhns died young, and left only a few vocal and organ pieces, but of considerable quality. On this recording he is represented by a wonderful and substantial solo motet, ‘De profundis’ (the Latin version of ‘Aus der Tiefe’). Here for the first time we hear the plangent strings of the Kellie Consort, led by Richard Gwilt, with Sean Heath providing chamber organ continuo; bass soloist Teddy Day sings most compellingly and with real understanding of the style. The music itself is harmonically powerful and at times startling, appropriately colouring the psalm text.

The recording includes two cantatas from Buxtehude’s Membra Jesu Nostri, a set of seven short cantatas with texts appropriate to Passiontide. These pieces alternate passages for soloists and ensembles with sections for the full choir, as well as short instrumental movements.

The choir’s contribution is direct and appealing, and the soloists acquit themselves well; the playing of the Kellie Consort is stylish and well-articulated.

The same vocal and instrumental forces combine in Bruhns’s ‘Hemmt eure Tränenflut’, which has a text proper to Easter, rejoicing in Christ’s resurrection. This splendid piece is full of vigorous declamatory writing. The central section is a solo for alto (nicely sung by Lauren MacLeod) and built over the classic four-bar falling ground bass which probably illustrates the perpetual ‘burden of deep sin [which] nowhere let me rest’. The work ends with an Amen based on the Lutheran Easter chorale, ‘Christ lag in Todesbanden’.

All in all, this beautifully produced and well-recorded CD is a notable achievement. The concept is well-conceived, the music itself is of considerable quality and interest, and the performances compare very well with fully-professional recordings of this area of repertoire. All the musicians involved should take great pride in their achievement.