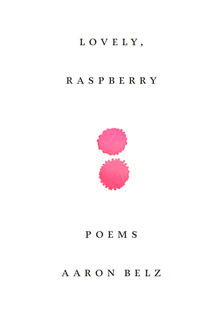 His first collection, The Bird Hoverer, was described by the Boston Review as “masterfully strange.” A poetic compliment indeed for Belz (b.1971) who has been our featured artist here on Transpositions since the beginning of the week. It seems opportune to share some thoughts about his second collection of Poetry, Lovely, Raspberry.

This collection evoked a certain kind of curiosity for me as a reader and raised many questions.  His use of an extraordinary range of meter and rhyme and stanza structures begs the question of creative priorities. There’s little reason to the formic structure of many of the pieces as Belz shows familiarity with a wide variety of stanzaic styles and meter. Many of the poems seem unfinished, or at least feel unedited, including “regret” with which Belz ends the collection. But maybe that’s the point. That it’s not so much about form as about the act of poetry. There’s a certain sense in which the moment is more important than the form that constitutes each poem. It feels like Belz works hard to appear not to take himself seriously. There’s a kind of self-reflexity that others have described as “bright, friendly, and surprising.”

Belz has a penchant for poetic titles. Some of the most notable in this collection are “tilling Charles Reznikoff’s back yard,” “slam dunque,” “as cole becomes less of an anomaly and the large car slows,” and “thirty illegal moves in the cloud-shape game.”

There’s a connectedness to time and cultural artefacts that will be refreshing to many readers. Belz draws upon images like Alberto V05, Michael Bolton, Al Gore, Mr. Potato Head, and Skee Ball. One hopes they will root the collection rather than date it. Many of the poems offer less a figurative playing with images than a setting out of a personal experience with a inside joke as the punchline as in “la vie,” “honeymoon in altai” and “smocks.”

Some poems are particular standouts including “you are you,” “love-hat relationship” and “unction.” “the waste land” is a thoughtful and humorous reflection traversing Chaucer, Shakespeare, and, of course, T.S. Eliot (53). Apart from “the waste land,” my personal favourite is “critique,” a poem which is as pointed as it is sharp – I quote it here in full (2):

That’s not very good either.

You’re not very good at this.

The thing with humour is that almost like no other aspect of creative expression, it is received with extreme subjectivity. I feel like this is especially the case with poetry. Many critics have found the humour in the collection to be to their liking. I don’t always. Sometimes it is questionable in taste as in “asking Al Gore about the Muse” (17). More often, I just don’t “get” it. Even when I “get” it, I often feel like it’s a little prepossessed. However, quite a few people have mentioned how much they enjoy the dry wit and comic timing of Belz’ live readings and performances of his poetry.  I thought it might be helpful to share this clip (9 minutes long) of a reading at AEM’s 7th Annual Evening of Arts & Entertainment.

If you’d like to read more of Belz’ writing or poetry, I’ve included details below:

0
Facebook Twitter Pinterest
LinkedIn Email
Written By
Anna Blanch
More from Anna Blanch
Why do you read what you read? Is it because a teacher...
Read More