In Karl Rahner’s Theological Aesthetics, author Peter Joseph Fritz, Assistant Professor at the College of the Holy Cross in Worcester, Massachusetts, ambitiously and compellingly aims to revisit the philosophical work of Catholic theologian Karl Rahner, a student of Martin Heidegger. Fritz addresses what he sees to be an undervaluing of Rahner based on overly reductive and superficial readings. Most importantly, Fritz is interested in emphasizing the Catholic ethos, defined as ‘radical openness to God’s self-manifestation through the world’ [3], pervasive within Rahnerian thought.

Though Rahner is typically reduced to a theologian of the “turn to the subject” or “anthropological turn”, Fritz’s work offers up a radical three-pronged thesis. The first part is to see Rahner as opposed to modern subjectivism, where the human person, as self-enclosed and self-controlled, finds oneself unable to relate to anything other or outside of oneself. Fritz contends that though Rahner uses the word ‘subject’, he does not appropriate it from the Modernists, instead he redefines it. Secondly, he wants to unveil Rahner to be a theological aesthetician who speaks of the sublime as referring to the Mystery of God – “Aesthetics” here not referring to beauty, but instead as ‘an account of the manifestation of being’ [11]. Lastly, Fritz shows that, despite being greatly influenced by Heidegger, Rahner is actively resistant to important aspects of his thought. 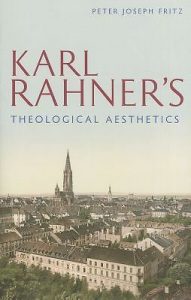 The first and second chapters aim at interpreting Rahner’s work in a way that is conducive to a relation with aesthetics and the sublime (and consequently his explication of the Catholic sublime). Here focusing mainly on Geist in Welt (1939), Fritz argues that this is not an epistemological text, but it is instead an ontological text focused on a metaphysics of knowledge, asking the question ‘what does an examination of knowing tell us about how being manifests itself?’ [27].

Through this, Fritz shows Rahner’s interaction with Thomas Aquinas’s account of sensibility, the intellect, and the imagination in order to show that the imagination is ‘the primary way that the human person transcends herself’ [35]—which he uses to affirm an excessus, or transcendence of the human spirit, and an anticipatory sense (Vorgriff) which ‘makes manifest the ordering of human knowing toward “that which is absolutely infinite”‘ [36].

The second chapter aims at examining Rahner in discussion with Heidegger’s teaching on the poetry of Hölderin as the locus of his ideas of history and home, the demigod-like role of the poet, and his apriorism of finitude. Rahner’s essay “Priest and Poet” (1958) provides a nice counter to Heidegger here, as he finds the role of the poet to be fulfilled only when it coincides with the priest’s teaching of the infinitude and love of God.

Fritz spends the last three chapters specifically explicating certain ways in which his reading of Rahner (and his Catholic sublime) can be seen to support the book’s overarching arguments. Chapter Three thus explicates Rahner’s direct refutation of the modern subject. Here we find him argue that ‘spirit is not a self-sealing intellect, but a sublime-aesthetic receiver’ [111]. Surprisingly but effectively, he accomplishes this by dissecting Heidegger’s teachings on Rainer Maria Rilke’s “angel” and Rahner’s Thomistic angelology. The chapter concludes with a reflection on his reading of Ignatius Loyola, where Fritz argues for a more nuanced reading of Rahner’s Ignatius, who must not be mistaken as a proponent of the modern subject. Despite being willing to refer to him as an individualist or an existentialist, ultimately ‘[i]nstead of bending the world to his will, Ignatius’s will is formed by God’s call’ [138].

The final two chapters offer further explications of the Catholic sublime, particularly by providing points of divergence between Rahner and Heidegger on language and history. In chapter four, Fritz looks to Rahner’s understanding of language which ‘centers on God’s incomprehensibility’ [158]. Effectively he does this by reviewing two Heideggerian texts which undermine the metaphysical tradition’s primacy of assertive language, pointing to the mystery which undergirds the very essence of language. Additionally, he makes use of Rahner’s writings on Mariology and connects it to Heidegger’s writing on “the thing” in order to address different modes of language which allow for greater openness towards the infinite–God.

Fritz’s final chapter identifies Rahner as an apocalyptic author, addressing his understanding of history and divine judgement—one which always seeks to comment on the mystery, the infinite, and the incomprehensibility of God.

Fritz addresses potentially problematic association of Rahner by a compellingly nuanced definition of “apocalyptic” as primarily identified by vision and catastrophe.

In the end, despite a potentially troublesome reliance upon conjecture, Fritz’s awareness is present throughout as he qualifies his proclamations. This aspect of the book’s structure is perhaps its greatest strength: each chapter and each section are clearly and consistently presented, terms are defined, and possible objections are conceded and responded to in turn. Over anything else, Fritz’s argument is one of nuance, one averse to immediate judgment or superficiality. As a result, whether or not one agrees with each interpretation in question, at the very least Karl Rahner’s Theological Aesthetics is a very well-reasoned and well-considered appeal for rediscovering Rahner. At its best however, Fritz’s work reclaims Rahner and his work as philosophically profound, robust, and indispensable for post-Heideggerian Catholic life and theology.