In his Foreword to the new edition of George Bernano’s 1929 novel, Joy, Andrew T.J. Kaethler (PhD, Univ. of St Andrews) writes, ‘In Joy Bernanos does the unthinkable and presents the reader with Chantal who unambiguously radiates saintly goodness.’ I was disposed to like this book as it shares my name, but also because I found the introduction very informative and enlightening.

From my reading of the book, I think Bernanos attempted to portray a character grown perfect in innocent virtue alongside souls distorted beyond recognition by sin. It is my opinion that he does this more effectively through prose than through characterisation. His philosophic assertions ring truer than his characters, which I think boils down to the difficulty of portraying thoroughly good and thoroughly evil characters. 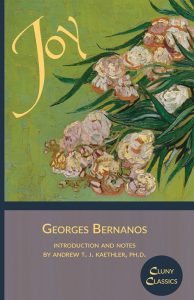 A repugnance for the ‘goody-two-shoes’ is one of the more innate feelings shared by humankind. Our collective radar for inauthentic, performative goodness is strong, which is why we so often feel that punch of looks-fair-feels-foul in our stomachs when we meet supposedly untainted heroes. This, in part, could be a reader’s error.

Like Eleanor Shellstrop (the not-so-saintly protagonist in the television series, The Good Place), we tend to think that those who appear good are actually frauds, because we feel like frauds ourselves. Even with this moral insecurity complex aside, we are members of a society where heroes stumbling and leaping off their pedestals is a daily occurrence. We are, therefore, often cynical regarding unblushingly good characters.

This is certainly true in Joy. Chantal is a character who literally never does wrong. She helps everyone, holds her father’s life together, asks for literally nothing. Surrounded, as she is, by intolerable humans ranging from insane to incompetent to inhumane, she does from time to time express exasperation. However, these moments are followed up by her own moments of thankfulness that she can experience weakness and therefore trust God. She daydreams at one point of living her days out in a convent washing dishes.

So, naturally, everyone hates her.

Bernanos anticipates our suspicions, and places them in the minds of the supporting characters. Some characters think her naïve. Some think she is a fraud. Some desire (and all but succeed) to taint or soil her goodness. Chantal bears these suspicions with equanimity, all while concealing a secret of her own. These antipathies culminate in the final scene of the book, an act of brutal violence which leads to a kind of redemption.

This interest in the depths of human nature and the use of violence as a means of grace is where one can see the connection between Flannery O’Connor and Bernanos (which the book sleeve notes). But this comparison highlights the weaknesses of the book, and, as Kaethler notes, the reasons for Bernanos’ decline in popularity.

While he indicates that Bernanos deals with sin ‘without rose coloured glasses,’ I think Bernanos misses the complexity of human nature. In his philosophic descriptions of the psychology of sin, he misses the humanness of even the worst sinner. In comparison, O’Connor is unflinching in her depiction of sin, but both her saints and her sinners are human; they drink iced tea, have pets, and get annoyed with their neighbours.

The trouble with portraying wickedness and saintliness is that we often forget that both the Saints and the Tyrants of the world are humans. Humans who have habits, odd senses of humour, histories, and pet peeves, and that in some way, these oddities and particularities are reflective of the very image of God.

Dictators sometimes enjoy a game of checkers. Saint Francis most likely would have loved cat videos. This is the grandeur of human life, that us beings, so like animals in our creatureliness and needs, are capable of choice, love, and depravity. . . and that all this grandeur so often takes place on the stage of gloriously ordinary life.

This, I think, is what Bernanos misses and what O’Connor achieves. For Bernanos, the bad characters are not only bad through and through, with no sparkle of goodness in the depths of their eyes, they are also flat characters who seem to have no favourite sports teams, do not pass the time of day by smoking, nor fancy any particular kind of food. In short, they are not very human.

Bernanos sees with some clarity the glory of sainthood, and the horror of sin, but these visions seem to obscure his ability to portray the human subjects in these ordeals. I think O’Connor excels where Bernanos does not because the shock of her novels is that such ordinary creatures could be capable of such astounding feats of goodness and sin. I enjoyed Joy, but my only wish was that it handled more lightly both the wicked and the good characters, because my hunch is that sainthood does not preclude the ability to laugh.

But perhaps I am afflicted with the same suspicion of the un-saintly characters. You will have to read it to make your own determination.

Editor’s note:  The editors at Transpositions found it appropriate to end our reviews cycle  in the third week of Advent, marked liturgically by ‘joy’ with a review of Joy by Joy (Clarkson)

I am very pleased to be invited to contribute to this symposium on Christianity, art, and education.  I am even more pleased do to…