John Piper: The Fabric of Modernism marks the fiftieth anniversary of Piper’s High Altar tapestry in Chichester Cathedral by celebrating and exploring his textile work in exhibition and catalogue. Curator Simon Martin, artistic director at Pallant House Gallery and member of the Cathedral’s Fabric Committee, brilliantly showcases rarely seen studies from the gallery’s own collection alongside loans from public and private collections – including furnishing fabrics, a scarf, ecclesiastical vestments, and tapestries at Chichester and elsewhere. The exhibition and catalogue both clearly showcase Piper’s famous love of English church architecture, evident in his 1962 Sanderson fabric design, Northern Cathedral, which is based on a painting of Sheffield Cathedral, as well as a group of four tapestries from 1984 on the theme of the seasons. These are based on foliate heads from mediaeval roof bosses, a recurring theme in Piper’s work. 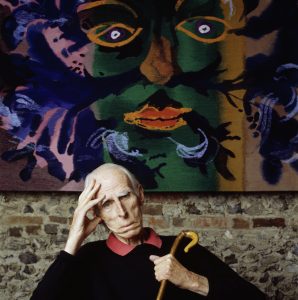 Transpositions readers will find most interest in the section of the exhibition and catalogue that explores the Chichester tapestry. The Chichester tapestry itself is in many ways a far cry from such Romantic evocations of early church art and architecture. Its motifs are big, bold, and vibrant – so much so that when it was unveiled in 1966, as we are told in the exhibition catalogue, a member of the congregation wore sunglasses to the dedication ceremony to express his feelings about its colouring. Both exhibition and catalogue do an excellent job of narrating the tapestry’s creation by showcasing preliminary designs and related works drawn from archival records.

The commission was one of several important projects for the Cathedral instigated by the Dean, Walter Hussey. Previously vicar at St Matthew’s Northampton, Hussey had also commissioned works from Henry Moore and Graham Sutherland. He approached Piper to design something for the High Altar in the early 1960s, as part of a reordering of the quire. The space Piper had to work with was a sixteenth-century wooden screen composed of seven vertical bays, crowned with gothic tracery. It seems both painting and fibreglass were considered as possible mediums for Piper’s work, but he finally suggested tapestry. This was to be Piper’s first – of many – designs for this medium, no doubt influenced by the 1962 instillation of Graham Sutherland’s tapestry for Coventry Cathedral, as Martin highlights in the catalogue. But, as Piper himself was keen to highlight, his tapestry would be very different from Sutherland’s Christ in Glory.

What Piper proposed was in fact a sequence of seven tapestries to hang in each of the bays of the altar screen. We see in the exhibition that he had previously worked in a similar format in designs for stained glass at Oundle School. There, in each of the nine lights of the window, Piper depicted a figure of Christ, each representing different aspects of Christ’s identity. It seems that such a sequence of figures was considered for the Chichester tapestry, but instead the themes of the Trinity (the dedication of the Cathedral), the Evangelists, and the elements were chosen. 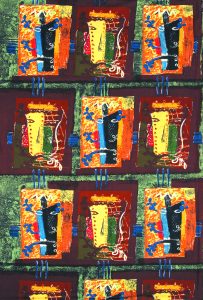 Through works from its collection bequeathed by Hussey (whose collection was the foundation of the Gallery’s collection) and by the Piper estate, Pallant House has achieved a visual record of the evolution of the design and its individual elements. Correspondence quoted from the Hussey papers show that aesthetic and theological considerations did not sit well together at all stages of the project. For the central portion of the design, representing the Trinity, Piper had proposed a Tau cross (for the Son), a flame (for the Holy Spirit), and a triangle (for the Trinity). Only at a late stage in the proceedings was an objection raised that there was no symbol for the Father, by which point Piper felt that his design had crystallised. Eventually, Piper settled on adding a white light to represent the Father – echoing a motif from his windows at Coventry Cathedral. This episode emphasizes the value of conversation between theologians and artists in the creation of religious art, making it more than just a problematic afterthought.

The aforementioned sunglasses-wearing protestor was not alone in objecting to the tapestry when it was first installed. Others wrote to the Dean and to the press to express their feelings. But there were also letters of support for this injection of colour and vitality into the heart of the Cathedral. Today, I am sure that the tapestry still does not please everyone – what work of art does? – but it is certainly well-loved by many members of the Cathedral congregation and others I have spoken to in my own work with the art in the Cathedral.

Throughout, the exhibition and catalogue are elegantly presented. Martin’s prose articulately weaves the threads of his narrative together to present a rich account of Piper’s varied work in textiles and the importance of the Chichester commission in that story. This is, no doubt, a fitting tribute to an important landmark in twentieth-century British ecclesiastic art.