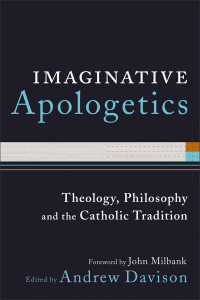 In his Introduction, Andrew Davison unpacks the title and gives shape to the collection. He notes:

The approach to apologetics offered in this book is imaginative twice over. There is an interest in the more expected sense of ‘works of the imagination’: several of the authors consider the role that literature and the visual arts can play in apologetics. [1]

There is therefore a second and more fundamental interest in the imagination among the authors of these chapters. Going beyond the imaginative work of the creative few, they insist that all human reason is imaginative. [2]

The essays are grouped into four sections:

In the first of this section’s two essays, John Hughes argues that the approach of apologists like Richard Swinburne, whom he takes as being representative of both the Catholic and Protestant approaches, is problematic. Besides being unsuccessful, these approaches mistakenly try to prove God’s existence and the veracity of Christian faith by way of pure reason, as if their “probability can be measured like any other ordinary ‘thing’ in the world.” [3]  Alternatively, Hughes suggests a more modest rationalism; more specifically, that instead of proofs, we seek “real debates and discussions, more modest and pragmatic arguments, based on the partial and provisional acceptance of certain non-ultimate premises.” [4]  Along these lines, I have suggested that we create and cultivate alternate wisdom traditions (see here and here) in an effort to create space for practice (i.e., witness).

2)   Christian Apologetics and the Human Imagination

This section opens with Alison Milbank’s contribution, a call to the Church to “use every imaginative tool at our disposal to awaken the religious sense.” [5] She goes on to suggest that we pursue something along the lines of Novalis’ magic idealism, “a poeticizing of reality” [6], coupled with Tolkien’s participatory realism. Milbank explains: “Whereas in magic idealism the stress was on the recovery of human creative power, here [i.e., in Tolkien’s participatory realism] the emphasis shifts to the objects themselves.” [7]  What you have, then, is something akin to C.S. Lewis’ “Sometimes Fairy Stories May Say Best What’s to Be Said”, where stories breathe new life into the otherwise “dead objects of the Kantian” [8] so that they might be resurrected and, to borrow a phrase from Lewis’ essay, “steal past the watchful dragons.”

Next up, Donna J. Lazenby encourages Christian apologists to locate diagnostic spaces, places where they might read the signs of the times. Lazenby goes on to practice what she preaches, reading the signs of “New Atheist Literature” and the Twilight saga.

Finally, Michael Ward argues, by way of C.S. Lewis, that the good imagination serves the better reason (i.e., imaginatively informed rationality) and that both serve the best: the will. He explains: “The apologist is thus a John the Baptist figure, preparing the way for the One who comes after.” [9]

3)  Being Imaginative about Christian Apologetics

Here, Stephen Bullivant explores the meaning, causes and remedies of atheism by way of Gaudium et Spes, arguing that an understanding of this social and cultural background is necessary for a genuinely imaginative apologetic.

Craig Hovey explores the possibilities of Christian ethics as an alternative to proof-apologetics and argues that truth claims aren’t much use apart from claims about Christianity’s goodness. It should come as no surprise, then, that he locates apologetics within (i.e., as a subset of) witness.

In the first of this section’s three essays, Graham Ward situates apologetics in the realm of culture critique, requiring the in-depth reading of culture as well as interpretive engagement.

Richard Conrad takes an historical route, surveying the church fathers as well as more recent figures like Henri de Lubac and John Paul II before revisiting something along the lines of Ward’s call for culture critique.

Then, in the book’s final essay, Alister McGrath covers familiar ground, outlining challenges from science to apologetics and opportunities for apologetics from science.  In sum, science does not address everything, including but not limited to questions of human existence, morality, etc. More generally, he concludes: “There is much more to apologetics than affirming the capacity of the Christian faith to make sense of things.  Apologetics, we must recall, engages the mind, emotions and imagination. It appeals to beauty and morality, as much as to rationality.” [10]

Andrew Davison is to be applauded for assembling such an excellent collection of essays, essays that address a very real need in the field of apologetics.  As with any collection, some essays are better than others. For my part, Alison Milbank and Michael Ward’s contributions were the real standouts. On the whole, I would have liked to have seen more conceptual work (i.e., theory that creates space for practice) like Milbank’s Novalis/Tolkien proposal as well as some additional work on natural theology along the lines of McGrath’s The Open Secret (Blackwell, 2008) or Anthony Monti’s A Natural Theology of the Arts (Ashgate, 2003). That being said, the book lived up to its promise as an exploration of imaginative possibilities as well as an imaginative exploration of certain possibilities. All the same, I would have welcomed more of the former.

Chris Brewer is the founder and director of gospel through shared experience as well as the editor and publisher of Art that Tells the Story. He has just moved to St Andrews to pursue a PhD with David Brown on developing an imaginative natural theology that creates space for practice (i.e., witness). Chris will be joining Transpositions at the end of September as a regular contributor.