Although Christian belief holds that Jesus is the incarnate Word, Christians often neglect the way in which the words of Jesus in that Bible are incarnated into specific fonts, paper sizes, and book bindings. As British calligrapher Donald Jackson quips, many modern printings of the Bible are ugly. After decades of practicing and teaching calligraphy, Jackson finally received the chance to remedy that situation in 1998, when the Benedictine monks of St. John’s Abbey in Collegeville, Minnesota, commissioned Jackson to begin work on an illuminated manuscript of the Bible. The product, The Saint John’s Bible, spurs us into remembering that the Word of God requires a tactile incarnation worthy of its message. It has the tools, care, and devotion of a hand-crafted medieval manuscript, but the imagery of a modern work of art. Jackson and his team of illuminators created a new iconographic language, including tanks, Tibetan mandalas, Mesopotamian monsters, and bugs!

Knowing that they were making history, Jackson and the monks hired Christopher Calderhead to document the project. The resulting book, Illuminating the Word: The Making of The Saint John’s Bible, is a wonderful insider look at the difficulty of this project, based on hours of interviews and imbued with Calderhead’s unique dual expertise as a calligrapher and Episcopal priest. The first edition of Calderhead’s book was released in 2005, before the project was finished. This second edition, released after the project’s completion, contains over 100 added pages of content, meriting a review of its own. 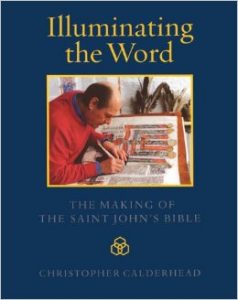 For me, the major theme that ties Calderhead’s book together is the idea of incarnation. The Catholic imagination, which sees divine incarnationality in many facets of beauty and artistic expression, is a guiding principle of The Saint John’s Bible. An idle viewer of The Saint John’s Bible might only focus on the beauty of this work. She might not think about the expenses, risks, accidents, and arguments necessary for this incarnation of the Word. Calderhead reveals just how much the artists, advisors, and abbots behind this unique Bible pushed themselves to their limits to make it a reality.

Calderhead divides this book into three parts. Part 1, ‘The Process,’ tells the story of how various people and skills came together to create this Bible. Calderhead details his travels to Jackson’s Scriptorium, the search for the right vellum, the process of planning the ‘architecture of the page,’ the theological committee that advised Jackson and his team of illuminators, and the many specialized tools that the artists used.

Take Calderhead’s description of the workings of the Committee on Illumination and Text, the group at Saint John’s University who advised Jackson and his team on which passages to illuminate and how. Every week this team of biblical scholars, theologians, artists, and art historians met to share their discipline’s perspectives on the text at hand and engage in a group lectio divina on it. Their work ensured that this Bible would not merely be a lofty work of art, but a visual interpretation of the Bible, mixed into the pages of the Bible itself.

This section also delights with its detailed descriptions of the intimate connection Jackson has with the tools of his ancient trade. Time and time again we read of how, through an improbable chain of events, Jackson came into possession of just the right quills, just the right ink, just the right embossers and scrapers. The ink sticks were particularly problematic and providential. Jackson’s favored ink was produced in the nineteenth century and had long since ceased production. Calligraphers from all over the world donated their spare sticks of this precious supply for this monumental calligraphers’ dream.

In part 2, ‘The Product,’ Calderhead delights in his descriptions of the seven volumes and some of their selected illuminations. We see, for example, images of Aidan Hart’s early drafts of the Life of Paul illumination in Acts, which rendered him more as a Greek Orthodox icon than the final collaboration with Jackson did. These images reveal the way artists with very different styles—in this case, Aidan Hart’s traditional iconography and Donald Jackson’s fresh, colorful brush strokes—combined their talents for a unique outcome.

Another illumination with a fascinating backstory is Wisdom Woman, one of the most well-known images in this Bible. For this work depicting Lady Sophia in the Wisdom literature, Jackson silkscreened an image of an elderly Palestinian woman which had been hanging in his studio long before he began work on The Saint John’s Bible. This illustrates how big a role chance and coincidence played in this project.

Calderhead’s book ends with Part 3, ‘Artists, Scripts, and Painters,’ which includes the story of the Heritage Edition facsimile project, the development of this Bible’s unique scripts, its current resting-place at Saint John’s University, and interviews with each scribe and calligrapher. I was particularly fascinated by the interview with Izzy Pludwinski, the Jewish scribe whose Hebrew lettering graces every book of the Old Testament. He quipped: ‘It’s not a simple thing for a nice Jewish boy to write a Christian Bible.’ But Pludwinski was not the only creator of this Bible who was not Christian. Jackson himself is not Catholic, but Anglican.

The fact that a Jewish sofer, an Anglican, a Greek Orthodox iconographer, and several others with different beliefs can create a wonderful Catholic Bible reminds us that like a calligrapher, God can use many different tools.

In sum, Calderhead’s book is a splendid reminder of the complicated process of incarnation, whether it be that of Jesus or an illuminated bible. Now that this work has been completed, we stand at the beginning of the conversation over the meaning of this Bible to people of the twenty-first century, both those with and those without explicit Christian faith. Calderhead’s book will help that conversation develop.

Jonathan Homrighausen (MA, Graduate Theological Union) is currently pursuing a PhD in Hebrew Bible/Old Testament at Duke University. He spent two years with the Heritage Edition of The Saint John's Bible while working in Archives & Special Collections at Santa Clara University. He is the co-author, with J. David Pleins, of Biblical Hebrew Vocabulary by Conceptual Categories: A Student's Guide to Nouns in the Old Testament (Zondervan, 2017).

A few years ago, when I taught an undergraduate ‘systematic theology for artists’ class, we looked at the traditional ways certain biblical scenes are…