Alissa Wilkinson and Robert Joustra. How to Survive the Apocalypse: Zombies, Cylons,
Faith, and Politics at the End of the World. Eerdmans, Grand Rapids, Mich. 2016. 208 pages. Paperback $16.00.

In How to Survive the Apocalypse, Robert Joustra and Alissa Wilkinson explore the multitude of apocalyptic themes and images in contemporary film and television, indicative of a ‘dystopian shift in popular imagination.’ Framed by Charles Taylor’s A Secular Age, Joustra and Wilkinson navigate those dystopian apocalyptic narratives on our screens in search of a meaningful and faithful life within the context of those deepest tensions and anxieties revealed in the popular stories of Battlestar Galactica, The Walking Dead, Game of Thrones, and more. These stories, they tell us, implicitly reveal ‘that we are, in fact, near the end of something,’ and push us, insofar as they demand meaning, to propose something, ‘shallow, fantastic, disturbing as it may be.’ 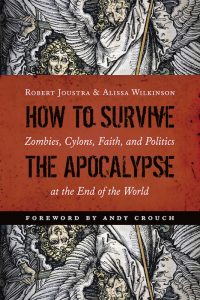 They begin with a brief history of the apocalypse and an introduction to Charles Taylor’s major ideas. The secular age, they remind us, is an age in which religion is one more thing we can choose. Faith is optional, rather than an assumed state. In Taylor’s telling, this is not simply an absence of belief and practice, but forms the creation of something new — a change in sensibility. We have moved on from collective identities, ‘porous selves,’ in which our lives were shaped by the spiritual experiences of an enchanted world.

With secularity comes the ‘buffered self,’ wherein we are isolated from each other and the world and occupied with a guideless search for authenticity. The universe is impersonal, intrinsically meaningless, and disenchanted. This is the lens through which Joustra and Wilkinson begin to interpret apocalyptic stories in the chapters that follow.

At its centre, this book holds summary and exploration of popular narratives that ‘expose hidden truths, wipe away the veneer, push past the superficial… and get to the reality of things.’ These stories, according to Joustra and Wilkinson, reveal the tensions and anxieties of the human condition. Against this backdrop we are invited to explore what it might mean to be human, how we relate to each other, and what we might be heading towards. The desire to discover our own unique ways of being human–the search for authenticity–unfolds in the human-Cylon war in Battlestar Galactica, as the various characters seek recognition.

Then there is the impending apocalypse that plays out with the rise of the dystopian anti-hero and his single-minded and drastic pursuit of power and individually defined values of the ‘true’ self. Think Don Draper of Mad Men, Breaking Bad’s Walter White, and the ruthless politician Francis Underwood, the lead in House of Cards. Analogous themes can be found in those techno-pocalypse stories that depict near-future dystopias in which our relationship with technology might actually reveal that we need other people in order to find our own identities, and in finding what we have in common and through our relationships, we are driven to a ‘stronger society.’

Meanwhile, the zombie apocalypse asks us what happens when the veil of ‘reality’ falls away, and what might we discover about the human condition.  The powerful dystopian stories aimed at young people, The Hunger Games for instance, reveal something of the level of mistrust aimed at institutions by Millennials, and the need for them to reach out anyway, to reconnect and build those institutions vital for freedom and unity.

In the final chapter, the authors explore the ways in which we might faithfully engage with contemporary culture in a secular age. Joustra and Wilkinson suggest ‘faithful compromise,’ using Daniel as a model, as the best possible option for supporting and engaging with questions of meaning while remaining faithful.

Though aimed particularly at Christians, it seems that this is a model which might extend to anyone wishing to question what it might mean to be human in a pluralistic environment. This book provides valuable insight into how we might interpret contemporary culture and respond to the questions and tensions raised by the zombies, Cylons, and antiheroes that occupy the popular imagination.

Though it may not be immediately obvious where one might find the connections between the broad range of chosen examples, Battlestar Galactica and Mad Men, or Breaking Bad and Game of Thrones, Joustra and Wilkinson are always building upon each chapter with what came before it, drawing out their full claim as it threads throughout this book. As they move away from Taylor’s narrative in their optimistic vision of compromise and working together, and look past the easy cynicism prompted by the dystopian to find something more hopeful, there is the start of something promising.