My thesis advisor has a consistent thread (among many) of advice for working through writing-up one’s research: give your reader a foothold. Take them on the journey with you. Lead them through your labyrinth so they don’t get lost.

For my own part, I struggled with this. What counts as a “foothold”? Where do I place them for my audience, how am I expected to know their reach or their grip-strength or the treads of their shoes to steady on the outcroppings? How does one offer a hand in invitation toward shared discovery versus looking like a parent in a carpark: placating, or even degrading?

Thankfully, the inimitable John D. Caputo penned Hoping Against Hope (Confessions of a Postmodern Pilgrim), a veritable masterclass in how to lead a reader—a person, a soul—through not only ideas, but through the vast and varied layers of human experience. 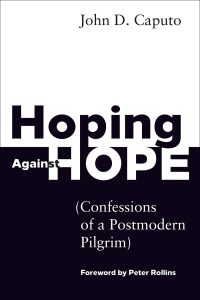 Part manifesto, part memoir, Hoping Against Hope makes no qualms about what it aims to do: ‘luring’ (21) the audience toward hearing out an argument for a spirit of endless questioning and engagement, a repetition of religion in the tohu vabohu sense of evolution a la Catherine Keller, a’religion without religion’ embracing what he terms the ‘nihilism of grace’ (22).

Extending an irresistible hand toward the reader with a grin and a wink and an absolutely enchanting writing style, one is led through Caputo’s fascination—and eventual loving taking-to-task—with the mystics in praising the grace of the quotidian, the die is cast in defense of a postmodern religiosity that ‘trembles’ (21) with the depth of everyday experience and finds its power in the profundity of the everyday for what it purely is within the moment, rather than in what it offers, promises, or invests toward some unseen, transcendental ‘after’—analogous in some ways, I think, to what my master’s advisor, the late Ronald Thiemann touted as the ‘Humble Sublime’.

Caputo ushers two elements of common experience to the fore as exemplars for his argument: the giving of a gift, and the offering of hospitality. He paints the ideal of these being offered unconditionally, without prompting, without a view toward reward, and beyond an economic perspective of exchange, in a vulnerable ‘naked exposure’ (85) of either the coming of the other, or the giving of self, in some way, to the other. The unconditional does not exist in reality, Caputo is gracious and pragmatic enough to make clear—a dream, but a necessary one, for ‘if we do not dream, reality will be a nightmare’ (51)—but he emphasises instead that this bipolarity of thought, and of faith, is both unbelievable and unreflective of the human condition itself. To exist beyond such contingencies, to be ‘without why’ (27, referencing Heidegger among others), then, is a matter of poetic license: simple and beautiful, yet much ‘more complicated when the prose of the world makes its presence felt’ (28). He therefore argues instead that reality exists in holding the tension between the concrete world and moments of the unconditional and living in that in-between, liminal space with a kind of ‘nihilistic grace’ that he goes on through the rest of the text to develop as the core of his present ‘religious’ conviction.

In this vein, he goes where few theologians of his stature venture, and that is to the realm not just of the interfaith, but to the question of belief versus faith (96) as a concept worth exploring, even to its culmination beyond the realms of what is commonly seen as organised religion into the communities of ‘non-knowers’ who are ‘all in this together’ regardless of their place in what Nelson Mandela modeled as a ‘’rainbow’…of religious truth: a polymorphic, polyvalent, polychromatic plurality of forms of life, each of which bows before the coming of the “other”‘ (99).

From here, Caputo (predictably, by now) doesn’t shy away from taking these insights straight to the top—questioning our concepts and formulations of the very idea and role of Godself. Drawing on his intellectual and experiential ‘cross-pollinations’ (105), Caputo here identifies the age-old question of whether God exists to be not just unhelpful, but the wrong question entirely—God insists, but like the rose, does so without why; the insistence is made into existence in the world, where the responsibility lies with us to make manifest. Caputo here goes back to his roots, as well as his process-relational leanings: ‘As the mystics say, God needs us’ (106). By exalting God as ‘the heights of inexistence’, Caputo proposes to ‘rid God of God’, releasing the Divine to inhabit that unconditional call, that purity of which ‘disturbs’ the conditions of the world and invites (insists!) that we enter and celebrate the liminality that typifies Caputo’s reality (114). For Caputo:

God’s inexistence is the condition under which the conditions of the world are transformed, shocked, and jolted by an excessive demand that seems positive unreal, like a pure gift, or pure hospitality, or pure forgiveness. The insistence of God means that the name of God is the name of something that lay claim to us unconditionally, like a promise of things that eye has not seen nor ears heard, but without the force of being, power, sovereignty, and omnipotence. It means that something calls upon us unconditionally, but without the power of an economic system of rewards or retributions or an army, even without a heavenly host of angels, to back it up (115).

In this way, Caputo gives the world, the liminal potential, to our hands. And in the face of cosmic, social, and personal nihilism, here is where Caputo comes to the culmination of his ‘nihilism of grace’—religion at its core ‘begins and ends with grace’ and ‘all that matters…is that we treat life as a grace’ (171) in itself, on the ‘slash between being and nothing’, made of hope and despair and serves as source for both (172), through which life process not ‘for’ anything beyond itself. Here, he differentiates between purpose and meaning: the nihilism of grace in many ways negates purpose in lived experience, but only so far as purpose is seen as a means to an external or long-term end (173). Invoking Kant’s view of art, internal meaning is the key: ‘there is a meaning in life but not of life’ (174), with many meanings, alongside various other human experiences, creating the ingredients of this grace that is being on the very edge of what it is to cease entirely. Temporality does not diminish value, but ensures it, for if nothing could be lost then nothing could, in turn, be gained; nothing could be changed for the worse, but could not be turned toward the better. The religious, then, is ‘affirmation of the unconditional, and the unconditional requires double and symmetric risk. First, the risk that God takes to disappear into the world without remainder, into the rose blossoming unseen and for a while, off in a distant corner of the universe. Secondly, the corresponding risk on our part is to live like that rose, to affirm life unconditionally, without the expectation of a reward or the fear of a punishment’ (176).

In the end, this terrifying, untethered, unconditional state of being is not something that Caputo apologises for, or even tries to explain entirely, and all the better, because its very nature exceeds the desire to root it in temporal economies. Instead, Caputo leaves us with an echo of pantheism—not that precisely, but a temptation toward it, if God was not purely and axiomatically unconditional (180-181)—and finally, four themes to part ways upon.

First, a dream: for it is only in the abstract that we know what the pure, unconditional gift, the unadulterated hospitality, but it is worth dreaming of it. Second a prayer—not to someone but more for something, for revelation of the dream in the world. Third encompasses, colours both of these: hope, the point on which the book and its argument starts and, fittingly, ends.

But I said four things, and so there are four. Caputo leaves us with a smile, invoking Derrida:

“Smile at me…as I will have smiled at you until the end. Always prefer life and never stop affirming survival. I love you and I am smiling at you from wherever I am” (200).

So, in affirmation of life in itself, with no agenda or gain: ‘life for life, for the grace of life’ (199), for this, we show gratitude.

And from wherever within the nihilistic grace of the cosmic multiverse we land, for however long we land there: we smile.

Katelynn Carver is currently studying for her PhD in the Institute of Theology, Imagination and the Arts, St Mary’s College, University of St Andrews, taking a multidisciplinary, process-oriented, theopoetic approach to the postsecular reading of Virginia Woolf. Prior to coming to the UK, Katelynn both worked in admissions/student services and earned her Master's degree in Religion and the Sciences / Religion, Literature, and Culture at Harvard University, where she also served as Managing Editor for Cult/ure: The Graduate Journal of Harvard Divinity School. She currently serves as a Contributing Scholar at State of Formation and Editorial Assistant for the Journal of Inklings Studies.

Fifteen years into the 21st century, the once definitive line between screen and world, both topographically and ontologically, is rapidly diffusing. Legitimate virtual reality—something…