Editor’s Note: This is the reflective, second part of Katelynn’s review. Part One was published on 11 November 2016. The book discussed is John D. Caputo. Hoping Against Hope: Confessions of a Postmodern Pilgrim. Minneapolis, Minnesota: Fortress Press, 2015, 214pp. $14.99 paperback.

In reviewing John D. Caputo’s Hoping Against Hope: Confessions of a Postmodern Pilgrim, I quickly came to the realisation that there was more to the book than met the eye. As much a contributive scholarly narrative as an autobiographical reflection, or perhaps even self-deconstruction, the vision of the person behind the preeminent academic is one of the great accomplishments of the text. As such, it seems both prudent, and a shame to neglect, to take the road of the pilgrim alongside such a vulnerable, wholly-honest piece and reflect alongside Caputo’s multifaceted selfhood as revealed in the book.  In the process of being so revealed, it can help reveal the selves that do theology/philosophy/hermeneutics/the stuff of the academe. These humanising factors are often swept under the rug for the sake of what we loosely define but desperately insist upon as the ‘professional’; with Caputo’s blessing, we can begin to both recognise and to share in relationship the selves that shape the scholar and, I believe, do better work in both arenas as a result. 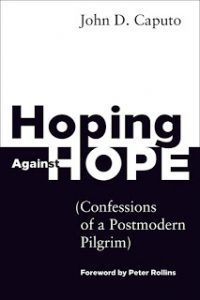 As a process thinker—a community with which Caputo is at the very least associated with, and given the content and style of his writings amenable toward—I am predisposed to prioritise relationality as a given in my thought process across contexts. In taking Caputo’s Confessions with that approach in mind, it is significant to bring that framework to bear upon what is a multiplicitous narrative of the progress (or else, the process) of a lifetime of research and a lifetime of self-discovery.

In the both the reflective and scholastic narrative of Caputo’s Confessions (I keep referring to it as such intentionally; it is not only the most reflective term for the piece as a whole, but indeed a sense of postmodern, postsecular Augustinian confessionality might be identified), the relational conversationality of storytelling itself is set out from the beginning in Caputo’s recognition of the ‘selves’ within himself, comprising himself, in dialogue with one another throughout the tides of his life. There is Jackie, the little boy who looked to the stars to marvel with innocent conviction that ‘No one knows we are here’; Brother Paul, his monastic self who, despite knowing what doubt and questions could and could not be faithfully conveyed in the context of his peers and superiors, was keenly aware that ‘leaving the world did not keep me safe from the stars’; the Professor, wherein ‘Jackie hidden safely behind the facade of “John D,”’ both the child and the questioner, the marvelling nihilist, in a sort of detachment of professionality; and what Caputo, throughout, refers to as I—‘or someone or something in what I with less assurance than ever still call ‘I’—a self that is implicitly honest, perhaps Whiteheadian in the processive sense of change, less assured in that it is never static, and consistently in flux as the exterior selves interact with the interior, and the interior selves impact one another in kind.

The act of crafting narrative is a testament to the fundamental human need to connect and bear witness to one’s experiences within a relational context, and regardless of the precise nature of said context, the process of narrative meaning making is primarily one of integration, in which the story emerges and is shared as a product of the dynamic interweaving of the personal with the public, the transient with the enduring, the finite with the infinite. When telling the story of self, be it autobiographical in the traditional sense or working through the construction of narrative within the context of implicit self-reference (Jackie and “I”, versus John D. and even Brother Paul) inherently implies an audience that is exterior to the author—whether physically disparate or an aspect of one’s own self—for whom the experiences of the storyteller must be translated so that a meaningful exchange of both information and affect can take place. In highlighting the quintessential continuum of significance in the momentary, quotidian nature of experience, Caputo speaks to the meaning in such endless lack of trajectory in being via two specific veins: the giving of a gift, and the offering of hospitality.

To such an end, we can frame the giving of voice to our stories in words as a gift, one in which a deep faith is invested in our listeners to understand, accept, and participate in our unique realm of experience, however momentarily and to whatever limited extent. We place an incredible confidence in the universality of some archetypal truths that will be understood, that transcend language and reside within, beneath, beyond the literal definitions of the vocabulary used to touch something deeper, something profoundly and inextricably human that ties us to some larger, pseudo-Jungian collective unconscious. It is, in this sense, both a gambit of language, and an undeniable act of faith—within or outside a traditionally theological context—that is embodied in the trusting of one’s fellows to fill in the gaps when we attempt to touch upon the extralinguistic essence of human experience in order to evoke meaning through the sharing of stories. This trust in humankind as conveyed in storytelling is—or else, can be where contextually appropriate—considered by extension to be an exhibition of faith in the Divine present within creation, thus imbuing storytelling with the kind of ‘nihilistic grace’ that Caputo raises to light. Likewise, the reception of the gift—the offering of assurance that the trust is well-placed and not foolish, is the offer of hospitality. In both senses, then, relationality—the trust that typifies and is built within genuine relationship—is what allows us to tell our stories, to reveal ourselves (in the plural), and gives us the opportunities to create significance. 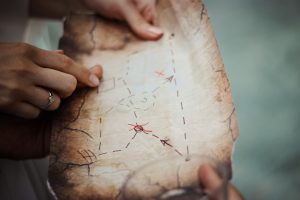 And yet: Caputo’s nihilistic grace is set within an unbound state of conditionality—heavily imbued with a relationality that attenuates moment to moment, story to story, line by line as experience writes it. This atemporality is wreathed in four parting themes in the Caputo text: a dream, a prayer, hope, and a smile—and perhaps that is what not only creates the narrative relationship, but also the development of selves/evolution of self. We dream of the ability to trust in relationship; to grow in expression of what and who we are within changing, fluctuating contexts, against likewise-undulating mores to be held. We pray that the hope is placed well; that the progress is realised. We hope this is not static, that it suits the model of all else within a nihilistic grace, moment by moment renewed. And a smile: giving the gift, accepting with hospitality.

But not only this.

For in the end, I will return to the suggestion of the beginning: how do we hold in creative tension the selves that shape—whether we like it or not—the Self we show to the world, gather behind a title, the impersonal ‘initial’ of the professional signature. Generally speaking, we align within an acceptable spectrum of what society expects us to be—in scholarship, we tend to think about what the scholars before us have defined as the norm; we tend toward the impersonal, the unbiased, the factual: we ‘hide’ behind our John D.’s the complexity of our pasts, our persons, our metaphorical conceptualisations, our doubt and fears and the things we don’t know, or don’t even care to know or wrangle into definition. And yet, to do this is itself dishonest, unfactual—whilst the colloquialism is ubiquitous, that the significance of the journey surpasses that of the destination, within the context of storytelling, the process is more meaningful than either the endpoint or the origin. These selves are essential to the only way we can make meaning within the reality Caputo casts: the offering of the gift of who we’ve been, and who we’ve become, and a hospitality toward these as much as toward the process of becoming itself. The practice of storytelling in this way reasserts a path for others to learn from and follow: the Ariande threads leading us from the labyrinths, cobbled through language and offered within relationship.

The primary significance is, instead, the ways in which make our meaning within narrative: the interplay that takes place, and thrives, and endures regardless of the contextual sphere in which it moves, and in which we find our purpose, our meaning not in the start itself, nor in the finish, but instead: within the telling.

Within the selves and the Self as a conversation: nihilistic until will impose a shape, a form; until we trust in it, and offer and accept it as a gift in the Derridean sense (that he also, significantly, cites as the voice of Jackie) that Caputo both opens and closes his book with: ‘I love you and I am smiling at you from wherever I am’.

And moment to moment, life to life, self to self: ‘the universe moves as one’, its own self in flux, whose authenticity is proven in its motion.

Through the grace of which, without agenda or intent: authenticity we may well grow better—give greater, receive kinder—should we learn to reflect it, in kind.

Katelynn Carver is currently studying for her PhD in the Institute of Theology, Imagination and the Arts, St Mary’s College, University of St Andrews, taking a multidisciplinary, process-oriented, theopoetic approach to the postsecular reading of Virginia Woolf. Prior to coming to the UK, Katelynn both worked in admissions/student services and earned her Master's degree in Religion and the Sciences / Religion, Literature, and Culture at Harvard University, where she also served as Managing Editor for Cult/ure: The Graduate Journal of Harvard Divinity School. She currently serves as a Contributing Scholar at State of Formation and Editorial Assistant for the Journal of Inklings Studies.

Jay Johnstone has recently burst onto the scene as a Tolkien artist. His images of Tolkien characters are distinctive – he paints figures from…