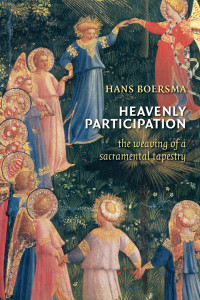 No stranger to Transpositions, Hans Boersma here argues for a sacramental (aka participatory) ontology, and this with reference to nouvelle théologie. The book is, then, a tract of sorts, making the stuff of Boersma’s Nouvelle Théologie and Sacramental Ontology: A Return to Mystery (reviewed here) more accessible for a general audience, and evangelicals in particular.

Generally speaking, in Part 1 Boersma argues that “both Protestants and Catholics have succumbed to the onslaught of a desacralized modernity.”[p. 11] More specifically, he discusses five developments that contributed to this desacralization: 1) the Gregorian Reform, 2) the separation between sacrament and reality, 3) the discovery of nature, 4) the separation of Scripture and church (i.e., as two separate sources of authority), and 5) the separation between nature and the supernatural.[pp. 53–67] Boersma then suggests that, “as Protestants, we need to relearn to see the world with sacramental eyes.”[p. 99]

Part 2 of the book thus focuses upon the Eucharist, Tradition, Biblical Interpretation, Truth and Theology. Each of these is treated in a chapter of its own, and each is related to the recovery of a sacramental ontology.

Throughout, Boersma is writing against “anti heaven rhetoric among evangelicals.”[p. 187] Much of this rhetoric, it seems, is coming from Neo-Calvinists (e.g., Albert M. Wolters, Creation Regained; Paul Marshall, Heaven is Not My Home; Michael E. Wittmer, Heaven is a Place on Earth), and so Boersma’s book might be read alongside one or more of these for a study in contrasting perspectives, in a course on Christian Worldview for instance.

An excellent introduction to nouvelle théologie, Boersma’s Heavenly Participation has already and will continue to appeal to a wide variety of readers, and for those interested in learning more, his Nouvelle Théologie and Sacramental Ontology is a fine follow-up read. For a different voice, see David Brown’s essay, “Sacramentality,” in The Oxford Handbook of Theology and Modern European Thought (Oxford University Press, 2013, reviewed here), and for a plurality of voices, see Flynn and Murray, eds., Ressourcement: A Movement for Renewal in Twentieth-Century Catholic Theology (Oxford University Press, 2012).