David Brown’s erudite-yet-accessible tone in God in a Single Vision is illustrative of his entire approach to this volume: an ecumenical and interdisciplinary conversation between theology, philosophy, and culture. A collection of essays curated by two of Brown’s former research students and ITIA alumni, Robert MacSwain and Christopher Brewer, the volume serves as a self-described compilation of ‘greatest hits,’ a literary mixtape assembled by passionate aficionados of Brown’s philosophical integration with his theology. 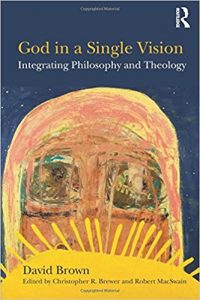 Brown embodies a via media, acting as a bridge-builder between seemingly disparate methodologies and disciplines—analytic and Continental philosophy, Protestant and Roman Catholic theology, ‘Christian’ biblical studies and a ‘secular’ approach to religious studies. The title draws to my mind the image of camera lenses coming into focus on a single point and providing a rich clarity of the viewed subject. On the whole, I contend that the book lives up to its name.

The collection focuses on the conversation between theology and philosophy, with the former serving as the primary interlocutor and the latter as its charitable dialogue partner. In this, Brown’s typical exploration of aesthetics and cultural forms is more in the background—there are illustrations and allusions to literature, painting, and theatre, but they are not the focus of these chapters.

Divided into four sections covering the larger theological themes of creation, religious experience and revelation, the Incarnation and atonement, and heaven, Brown’s essays are concise, well-organized, and focused on the subject at hand. However, some of the chapters’ brevity may be impairing, as one wishes Brown could have expanded further on a particular issue or question. For example, in addressing the question of theodicy in Chapter 3, ‘The Problem of Pain: Why Philosophers and Theologians Need Each Other,’ Brown examines the contributions and the errors in each discipline’s regard of the question of human suffering, concluding that philosophy addresses why pain in general exists where theology responds to the specific suffering of individuals.

That Brown manages to effectively weave together considerations of moral evil from as diverse a group of thinkers as C.S. Lewis, Alvin Plantinga, Dorothee Soellee, and Jurgen Moltmann is laudable; yet, limiting such a vast philosophical subject to a ten-page summary barely scratches the surface, even as Brown’s treatment of the question is both analytical and pastoral.

In other words, readers should expect and appreciate the thoughtful succinctness of this presentation, even as they might be inspired to seek out Brown’s lengthier writings.

As an introduction to Brown’s overall thought, God in a Single Vision highlights some key distinctions in Brown’s theology, namely his strong defence of a social Trinity; his kenotic Christology and emphasis of Christ’s human nature; and his argument for the traditional belief of an intermediate state in the afterlife (Purgatory) albeit based on more contemporary philosophical considerations.

While aesthetics is not the primary subject of the essays, interwoven throughout is the thread of beauty and form, sometimes in surprising ways. For instance, in unpacking his kenotic Christology, Brown uses the analogy of method acting in comparison to the Incarnation. This image of Christ-as-actor, a ‘total absorption in the character’s identity’ as God ‘plays’ Godself in the midst of humanity, is certainly a vivid metaphor, although Brown does acknowledge its inadequacies.

For Brown, the image is not of a loss of identity or artifice, but of authentic commitment to the Other, a ‘communion’ of consciousness in the union of human and divine [98-99].  This notion of interconnection and simultaneity, even improvisation, is indicative of Brown’s work in this volume as a whole—his interdisciplinary commitments and passions shine throughout. In this, God in a Single Vision serves as a helpful introduction to Brown’s paradigm, as well as a solid contribution for those interested in the various intersections between philosophy (particularly of an analytic persuasion) and Christian theology.