Editor’s Note: Transpositions is pleased to celebrate the launch of the Logia initiative within the Logos Institute at the University of St Andrews.  Logia’s mission is to support women who are considering pursuing postgraduate Divinity education or who are already students or staff at this level. As part of the Logos Institute, Logia brings the disciplines of philosophy, theology, and biblical studies into conversation. By equipping them at this level, more qualified women will be ready and able to enter the academy and the church, encouraged by Logia’s maxim – You can be what you can see.

This week’s review is an example of the intersection and relationship between the Institute for Theology, Imagination and the Arts (ITIA), the Logos Institute and its Logia initiative, as renowned scholar and Logia Advisory Board member, Sarah Coakley, crosses the terrain of theology, sexuality, philosophy and the arts. For more information on Logia, refer to their website:  http://logos.wp.st-andrews.ac.uk/logia/.

With unprecedented poise and disarming prose, Sarah Coakley, Norris-Hulse Professor of Divinity at the University of Cambridge, leaves a vexed world speechless with her fresh call to a deliberate reconsideration of the entangled issues of prayer, sexuality, and the God of our contemplation. Her work is as sociologically bold as it is theologically apt, bringing together a variety of cultural and ecclesial data for the purpose of forging constructive paths through difficult questions of the nature and meaning of human desire. Her answers, she says, are as ancient as they are innovative; and they cross interdisciplinary terrain, including theology and the arts.

The overarching ambition of the work is to communicate an intrinsic connection between the ordering of human desire and the desire internally couched in the divine life of the Triune God. Anthropology is to be understood in its analogical context, as an image of divine communion. Appreciating humans as analogues of God, Coakley says, helps clarify the raison d’être of sexuality. Embodied desire can make sense of itself so long as it fastens to the Trinity through contemplative prayer. Contemplation, far from an elitist act, is simply “deep prayer in the Spirit” [p. 25], and is the connecting means by which our deepest desires are reordered according to their ultimate source in God. 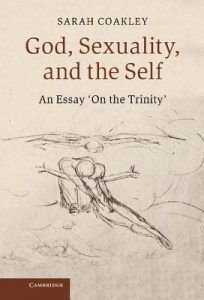 Now these three remain: sexuality, prayer, and the Trinity. This “nexus of associations” [p. 14] can be all too easily forgotten if the sign of sexuality displaces the attention of the thing signified, the Trinity, deserves. When unmoored from its sacramental home, human sexuality can only implode into “the horns of that false dilemma” [11] between the anxiously conservative and secularly libertine. Recovering the integrity between divine desire and human desire, however, opens up a vista of ecclesial possibility where painful questions are only slowly answered and sexual longing, while not repressed, is chastened and purged into the fullness for which it was made.

Practitioners at the interplay of theology and the arts will be elated with Coakley’s creative moves in Chapter 5. In an effort to corroborate her thesis that gender is part and parcel of trinitarian description, she tracks various sexual undertones that have subliminally featured in iconography and church art which depicts triune relations. Such an effort follows from two claims, 1) that gender relations are analogues of triune relations, and 2) that church history has codified these relations in its iconography. If these two theses are the case, then gender relations cannot help but be seen, albeit subtly, in cultural artifacts that enshrine ‘ideal’ relations in Godself. It is this entanglement that Coakley illumines in chapter 5.

Coakley is innocuously clear from the outset that she examines these visual artifacts as a theologian, not an art historian. Though this clears her from the burdens of endless exegetical precision, she admits that the ‘affective fallacy’ of eisegesis is a legitimate concern. Can one’s perusing of art for doctrinal themes regress into reading whatever one wants into the art in question? Indeed, it can ¾but it neednot. Just as responsible reading can never entirely be a subjective fancy, on the other hand, neither is interpretation only the restating of a work’s original intent. Rather, as Gadamer argues, interpretation is the ‘fusion of horizons,’ that of the workman in the work and the one beholding the work. Coakley therefore rightly thinks that reading cultural artifacts, both texts and art, should take seriously both the original context of a work, and the current context of the reader. The quest for historical accuracy should not paralyze the theologian from going on to reflect on the doctrinal witness embedded in that social data ¾it is this bold reflection that embodies Coakley’s théologie totale, with all its daring attention to doctrine’s wholistic appearances in human life.

Manywho are interested in the interplay of theology and the arts would say they are taken with an inherent relation of these two realms. It is not that one is an artist and a theologian and therefore takes it upon oneself to integrate these two into a union that would otherwise not exist ¾rather, the indissoluble link between them bears witness of itself to one who is open to seeing it. Many Christian artists therefore find it difficult to articulate this tacit link ¾after all, art itself is a profoundly implicit and subjective experience, a medium that commits itself to communicating what words cannot. Theology, by contrast, is a discipline of words, inasmuch as it is a ‘word’ (logos) of ‘God’ (theos).

As a theologian by trade, Coakley is able to give word to this unique function of art which theology needs in order to bear full (even ineffable) witness to the object of its study. As she defends the propriety of the aesthetic over certain aspects of theological inquiry, Christian artists will probably be relieved to see that it is possible for a theologian to give word to that for which there are no words. Her helpful opinion is worth quoting at length:

But there is also…another basic intention in my project…And that rests on the assumption that there is a revelatory irreducibilityabout visual symbolism that will not simply translate without remainder into the verbal. ‘The symbol gives rise to thought’, as Paul Ricoeur’s memorable slogan reminds us. That is: art does not simply illustrate doctrine as a kind of anodyne teaching aid for something already settled theologically elsewhere. No, theological art at its best can enable ¾in a way that on this supposition onlythe arts can ¾doctrine’s creative new expression, animus, and efficacy. And if this supposition is correct, then the artist may be the one on whom one could best and first rely… [p. 191].

Of course, this humble honoring of the arts is entirely consonant with the un-hegemonictheology in via and the unpossessive contemplation which Coakley advocates and engenders in her theological method.

Theology need not be threatened by the unique place of the arts in doctrinal expression, and it need not fear the experience of seeing more than one can say.

Those in the realm of ‘Theoartistry’ will also be pleased to hear these convictions will intentionally feature in future volumes:

As with the other aesthetic explorations planned for later volumes of this systematics (on poetry, music, and liturgy, respectively), here is the moment in the systematic project when one explicitly invites a certain seepage from the unconscious in one’s response to the art form. To allow oneself to be caught off guard, disturbed, intrigued, irritated, freshly inspired or even reduced to mirth by such an experiment is precisely part of the searching of dark corners that my method bespeaks. [pp. 192-193].

In short, Coakley’s vision of the aesthetic in theology is methodologically sophisticated and liberating for any sympathizers, as that vision allows the arts to be themselves, to communicate “something both richly symbolic and at the same time apophatic in its imaginative dimensions.” [p. 260].

If you enjoyed this review, you may like to read a previous article by one of our regular contributors, Amber Noel, on Sarah Coakley’s book. The article can be read here.

Preston is a postgraduate student at the University of St. Andrews, currently pursuing an MLitt under the supervision of Alan Torrance in the Logos Institute for Analytic and Exegetical Theology. He will begin a PhD on John Calvin in 2018, also at the University of St. Andrews, which will focus on Calvin’s doctrine of Christ’s descent into hell. He is currently seeking ordination, and is researching theological methodology, analytic theology, Reformed Christology and soteriology, and trauma theory.

In an earlier post, I drew our attention to the recent increase in church commissioning of the arts within the UK.  This renaissance of…