Editor’s note: This is the first part of a two-part review.

I first had the pleasure of meeting Rachel Mann in March 2017 when she was a speaker at a schools project I had coordinated to connect young people with the work of Christian artists. After just a few minutes of hearing her speak, I knew that I had to read her book, and more than that, I had to interview her. As a writer, I share Rachel’s malady of long-standing preoccupation with the Great War. My play, “Finding Alice,” will have its first theatrical release next year, and like much of my writing, is set during war time. The questions she addresses in “Fierce Imaginings” are the questions that have been developing in my own mind all my life. Rachel’s dual position as a priest and poet imbues her writing with a reverence and lyricism that inspires reflection. But it is her unique perspective as the grandchild of men who came back from foreign lands shrouded in silence that gives the book both its impetus and its heart. Thus, it is fiercely personal – a book that is both a tribute and a lament.

Is there a reason you chose prose rather than poetry?

My anxiety about attempting to write a series of poems discussing coming to terms with the Great War is primarily appropriation. It’s also very difficult to find a way to write about a war that isn’t a kind of pastiche of Wilfred Owen, or Sassoon. The one poem in the book is precisely based on distance, and is trying to create an effect that spans the gap and asks what exactly is time – time measured in inches and feet since that would have been the experience of the soldiers – but as a poet I’m making a comment. But I’m not there. I am wary of appropriating voices that I can’t legitimately own.

Even though we might feel that the war is not our literal experience, you say in your book that “we still carry war inside of us.” However, it only seems to be this war, not other British conflicts that are included in this mass cultural remembrance. Why do you think that is?

It was the Marxist critic Geoff Dyer under the influence of John Berger who said that the First World War was a war “fought to be remembered.” I think of the lines from “For the Fallen,” by Laurence Binyon that we recite every year, but that was written in 1914, within weeks of war breaking out, and it has become our civic liturgy. Because of these effects that reach forward, telling us that this is a war we will remember, we do remember it! It’s also important to remember the difference in scale. In the Boer war, for example, there were 20,000 dead over 3 years, but in one day at the Battle of the Somme, there were 20,000 dead. Also, this was a conscript war. The first year of the war was marked by a million volunteers. There is something extraordinary about whole families having stories that were suddenly caught up in this mind-blowing, flesh-destroying war that previously they would not have been affected by. These were families that previously were only marked in history by a birth certificate. It was a huge cultural shift. It was unprecedented. 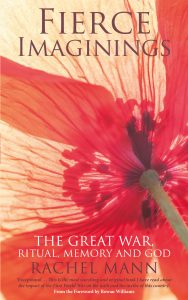 It is interesting to also consider the idea that just as this was a generation of soldiers, it was also, by conscript, a generation of killers. Why do you think it is that society only remembers them in one guise – as heroes?

In Britain there has been a persistent narrative that there is a sort of honour of going off to fight for your country. It was persistent in folk music and persistent in popular culture, so I think that’s where the hero model comes from. The shadow side of that, of course, is how soldiers were treated when they returned. There was a lot of talk at the time about “the land fit for heroes,” but on the return, these soldiers actually experienced a lack of honour. I think that there is a problem in our memorialisation of the Great War that we don’t navigate the right way to deal with soldier’s trauma, and the cenotaph actually becomes a place of shame. The impact is that there is then a sense of unresolved trauma, and a lack of atonement. I think that was the case for my grandfathers.

Do you think we prefer to remember the dead boy, rather than the damaged survivor?

Possibly. I think that’s because we can (said with the greatest respect) do what we want with the dead boy, and for a traumatised culture, the fixity of death allows us to respond how we want. But the actual reality of a traumatised individual demands of us a rather different set of responses, or at least invites them. Whilst we have become more culturally accustomed to the damaged survivor, what we can’t quite imagine today is just how traumatised Britain was afterwards.

Speaking about trauma and atonement, these are areas where one would expect the church to be available but as you mention in your book, it was often the case that it was not. Do you think that was because the church itself was traumatised?

Yes, because how could a church (Church of England) that was so deeply inured in the imperial vision come to terms with such a massive social trauma? The church believed that we were made to overcome and that the Lord would provide, and that the stories and images it held onto were perhaps weightless in the time following the war. This is exactly what makes Wilfred Owens’ poem about Abraham and Isaac, which acts as a summary of the failure of that covenant, so powerful.

I think the failure was represented as much on the micro level as on the grand level. The micro level was that the Church of England was so interred in the imperialistic project that it was thought totally appropriate for it to act as a recruiting Sergeant for the slaughter. In an age before mass communication, preachers could be extraordinary propagandists, and they had a massive impact. That is a betrayal of something that I believe is quite close to the heart of Christianity. However, running alongside that is the rather impressive capacity for the church to generate people who wanted to be close to the suffering. The Church of England chaplains and Roman Catholic chaplains were right there in the midst of it. They committed to taking sacrament and atonement, and even God, into the trauma.

It’s interesting to talk about taking God into the trauma, and you mention in the book Wilfred Owens’s comment that “God is in no man’s land.” Do you think that there was a shift in our theology following the First World War that started to take God away from the church and into no man’s land?

I do believe that, but I don’t think we really began to see the effects of that until Auschwitz. In German and Swiss theology I think the shift is starting to emerge through the likes of Barth and Bonhoeffer writing after the Great War, with their focus on Christ. They were asking questions like; what does the cross mean? What does the resurrection mean in light of the cross? Part of the challenge of Owen is that he adds impetus to the literary reshaping of Christianity. Owen was quite a conservative writer, but because of his experience on the front line and of being religious and a poet, he makes us wrestle with literary categories. He tells us that Christ is out there, in no man’s land. That kind of observation is firstly only really available to a front-line soldier, and secondly only available to a poet. There is a sense in which some of those things which had gone on in the theological realm of the 19th century were reformed when they hit barbed wire. Liturgical settlements were exposed to incarnational problems.

Part two of this interview will be posted next week: 6 October 2017.

Emma Hinds is a graduate from the University of St. Andrews with an MLitt in Imagination, Theology and the Arts, and an MLitt in Creative Writing. She has published a variety of fiction and nonfiction works, including an essay in Tarantino and Theology (Gray Matter, 2015). She currently writes from Manchester while lecturing at Regents Theological College in Applied Theology and Performing Arts.

In the recent Cinderella (2015), directed by Kenneth Branagh (Thor, Hamlet), Disney reminds viewers of the age-old story, where a beautiful young maiden ascends…