For 75 years, followers and fans of Evelyn Underhill’s work lamented the misplacement of two hand-written prayer books she used when leading spiritual retreats. The books contained a series of prayers Underhill had collected over the years, combined with a number of her own personal prayers. Amazingly, they’ve been found, and in Evelyn Underhill’s Prayer Book Robyn Wrigley-Carr has edited them for print and public consumption. The result is a lovely, infuriating little book. 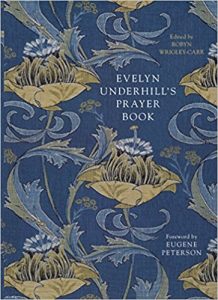 First, the lovely bits. Above all else, Underhill is a wise, spiritually sensitive, and excellent guide to the spiritual life. She has read widely,and it shows in all her works—this one is no different. Prayers are selected from some forty sources, ranging over 1700 years, and from a variety of traditions. Words like “smorgasbord” and “buffet” fail to capture the quality of these selected prayers from spiritual masters. Additionally, Underhill’s own prayers, doubtless formed by her encounter with these historic prayers, are very often of a piece with the whole. This is a lovely collection of prayers.

Additionally, Underhill’s Prayer Book is lovely because it offers a spirituality we need—if not always the spirituality we want. Consider the following prayer, attributed to one “P. Charles,”

Open our eyes, O Lord, that we may learn to know you in Your humble lowliness and discover You in the sanctifying prose of daily duty. For there, You do truly dwell; it is in this simple duty, whatever may be its form, that we are sure to meet you. Lord, we are inattentive students and forgetful pupils; it is needful that You repeat to us each day the lesson of Your invisible presence. (29-30)

This is austere, but wholesome, representing a spirituality that is approachable but in no wise soft.

Lastly, the physical book itself is lovely—lovely to hold, with a fine trade paperback cover, and appealing artwork.

But, as I mentioned, the book is also infuriating—and the bulk of its infuriating power is found, regrettably, in its editing. First, and above all else, the book inexplicably lacks references to the works Underhill has quoted. Interested in finding out where Aquinas wrote that prayer? There is no reference. Curious to read more of Launcelot Andrewes? There’s no footnote to tell you where to look.  This is a nearly unconscionable oversight—as anyone who has read Underhill knows, one of the joys of reading her is encountering references to all the books she has read. Reading Underhill, like reading von Hügel before her, is a liberal arts education in historic Christian literature.

But my concerns don’t end there—to this (rather huge) issue is added another set of problems. For instance, in the P. Charles quote above, no reference is given to the identity of P. Charles. He is not listed among the contributing authors in the introduction or short bios at the conclusion. At the very least, the editor might have noted that we do not know who this is. (For the record, I think it’s probably Charles de Foucauld.) Another example: the frontispiece for the book contains a scanned photo of one of Underhill’s journal pages, labeled “38” and containing a prayer “attributed to St Francis.” However, in the volume, this prayer appears labeled under the heading for page “60” and the attribution to St Francis is eliminated. (It is on page 49-50 in the published book.) It leaves me wondering—what pages am I reading? And what else might I be missing here? This, combined with Wrigley-Carr’s decision to ‘modernize’ certain language, makes me feel like there’s something sloppy about the editing of the volume.

Lastly, and as an especial affront, the book contains endnotes—that bane and horror of a reader’s existence, the advocates for which, in my estimation, an entire circle of Hell has been reserved.

To conclude, I think it is worth asking—who is this book for? Is it for a casual reader, or for Underhill aficionados?

It’s hard to imagine a casual reader picking up a book of occasionally archaic prayers in the tradition and style of the Book of Common Prayer. Furthermore, if the intention is for the casual reader to encounter and be formed by Underhill, then it seems self-defeating to fail to give that reader recourse to the authors to whom he or she is being exposed. If it is intended for the Underhill aficionado, then the book surely disappoints. I want to know what Underhill was reading, and how she engaged with those authors, and I want to see where she repeated herself, and I want to read her words, not Wrigley-Carr’s modernized and edited version of her words.

Evelyn Underhill’s Prayer Book is, these concerns noted, worth reading. But chances are you may find, as I did, that it is both lovely and infuriating at the same time.