Given today’s world, filled with images of hurt, suffering, degradation and pain communicated through a variety of visual media, the editors and authors of this book have sought to communicate an ‘ethical phenomenology of images of agony’ [xiv].

While it is not unusual for academics or visual artists to explore the ethics of pictures of suffering, this book professes its uniqueness in its ‘transmedial’ approach [xvi]. Also unusual, the editors of this book acknowledge the idiosyncratic challenges in exploring images of pain academically: ‘When faced with images of pain, the critic is exposed to a double confrontation: there is both the general hermeneutic phenomenology – the encounter with a mute object of interpretation – and the additional challenge of confronting something unpleasant and emotionally devastating’ [xv]. 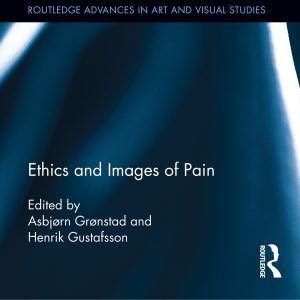 By exploring the ethical phenomenology of images of suffering transmedially, and by acknowledging the emotional cost and potential ethical pitfalls (e.g. complicity, propagation, voyeurism) of such an exploration, the editors have provided a rare work in the academic criticism of painful images – images that depict pain as well as images which may cause pain to the viewer.

The book is structured in four parts: From Voyeurism to Visual Politics; Looking In, Looking Away; Performances; and Mimetic and Mnemonic Frames. In these four sections, the transmedial nature of this book particularly stands out. As the editors acknowledge, most books in this field tend to be monocular, exploring a single medium or genre (for example: Jolyon Mitchell, Media Violence and Christian Ethics; Susie Linfield, The Cruel Radiance; Susan Sontag, Regarding the Pain of Others).

This collection of twelve essays, on the other hand, explores documentary and fine art photography; documentary and fictional film as well as the bystander video or snapshot; works of theatre, sculpture and painting. These various media are then discussed within contexts of visual politics including the nature of voyeurism, the recording of medical trauma and abuse, as well as the phenomenon of spectators ‘tuning out’ or ‘walking off’ during presentation. Together, the work becomes something akin to a primer on the breadth of visual mediation of pain and suffering.

One particularly striking theme that comes out is ‘the refusal to look’. These issues are particularly brought out in the chapters by Frank Möller, ‘Associates in Crime and Guilt’, and Mattias Frey, ‘Tuning Out, Turning In, and Walking Off; The Film Spectator in Pain’. Möller points to an interesting comment made by an ‘anonymous’ Lieutenant General of the United States who, when presented the opportunity to view the now infamous Abu Ghraib torture photographs, refused, saying, ‘I don’t want to get involved by looking, because what do you do with that information, once you know what [the photographs] show?’ Möller suggests that in addition to the predictable sense of self-protection implicit in the statement, there is the more insidious implication that ‘as long as we do not see something, we do not have to respond to it even though we may be aware of or suspect its existence’ [16].

Frey, on the other hand, explores the theme of ‘refused reception’ [94] in what makes a movie goer turn off, or walk out. Despite the book’s theme of the ethical phenomenology of images of suffering, Frey seems more interested in the sociological or micro-economic factors leading to ‘refused reception’ rather than its ethical implications. While still an interesting article which ultimately identifies disgust as the primary emotion behind those who walk out of film screenings, the reader might feel the chapter would better fit a collection of essays on film studies or patterns of media consumption than the ethics of painful images.

The set of theoretical, cultural, and media categories engaged by this book is exceptional and enlightening. One might feel, however, that there is an absence of the religious.

It appears that most other facets of images of pain in culture are expressed, from fiction, to documentary, to medical science, as well as figurative, performative and textual expressions. It is therefore surprising that the wealth of pain and suffering depicted in religious art, and the significant responses made by the religious to images of pain are absent. Ethics and Images of Pain feels somewhat incomplete due to the absence of engagement with religion in this context.

Editor’s note: This is the first in a three-part review of two books in Routledge’s ‘Advances in Art and Visual Studies’ series.

0
Facebook Twitter Pinterest
LinkedIn Email
Written By
Thomas Brauer
More from Thomas Brauer
This is the second of a three-part collaborative series featuring the poetry of...
Read More