With this latest addition to his ever-growing corpus, Thomas P. Rausch SJ, T. Marie Chilton Professor of Catholic Theology at Loyola Marymount University, seeks to expand the reader’s eschatological horizons. Rausch avers that eschatology has changed from the hopeful call of the primitive Church, “Come, Lord Jesus,” to the excessive individualistic concern of the ‘last things’ (i.e., death, last judgement, purgatory, hell, and heaven), a shift from communal and historical hope in the kingdom to individual salvation. While calling to account Christian individualism, he also points out the dangers of an unrestrained kingdom focus (‘regnocentric’) in which Christianity is simply turned into an ethic for social justice, one road to the kingdom amongst many. It is Rausch’s contention that only a Christocentric account of eschatology can preserve the import of the Gospel message of the kingdom without sliding into excessive individualism or pluralism. 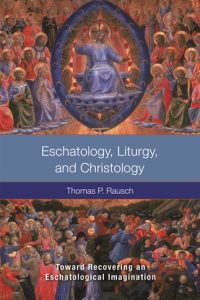 After laying out the problem in chapter one, Rausch turns to the Old Testament (ch. 2) and traces the eschatological and apocalyptic themes. The eschatological or what he terms ‘prophetic eschatology’ “announces a divine plan for Israel and the world aimed at changing the present social and political order” (42). Whereas, “apocalyptic eschatology is more cosmic and otherworldly … a divine intervention that has little concern for historical developments” ( 42). The following five chapters continue to explore this tension looking at different facets within Christianity.

The majority of Rausch’s interlocutors tend to come, so to speak, from the left of centre (e.g., Johann Baptist Metz, Jon Sobrino, Elizabeth Johnson, and Peter Phan). In addition to these scholars he brings Joseph Ratzinger (Pope Benedict XVI) into the conversation, but it reads slightly askew as if Ratzinger is one voice of dissent amidst an overwhelming chorus––did Rausch forget about the ressourcement theologians who are often associated with Ratzinger? Fortunately, Rausch does not set up Ratzinger as a straw man, and, in large measure, he offers a fair read of Ratzinger (oddly he misses the importance of temporality in Ratzinger’s relational vision).

With Rausch’s apparent penchant for utilising liberation theologians it is surprising that his conclusion is reasonably well-balanced. He does not desire to abolish the ‘last things’, but rather he aims to Christologically set them in context and balance them with a ‘prophetic eschatology’. Rausch concludes,

the eschatological role of Jesus cannot be taken from him … he is more than a model or exemplar, teaching God’s special love for the poor. Jesus is God’s Word become flesh … who lives in the divine presence and is already bringing the eschaton when we celebrate the Eucharist. So like the early Christians, we also pray, Maranatha [p. 161]!

Although slightly slanted to left of centre, the book provides a good overview of eschatology and helpfully articulates the need for a Christocentric approach. At times it reads like a text book, yet Rausch’s clarity, breadth of knowledge, and corrective aim is commendable.

Dr. Andrew TJ Kaethler is Assistant Professor at Catholic Pacific College where he teaches theology and philosophy (or anything remotely related). He completed his PhD in 2015 at University of St Andrews.