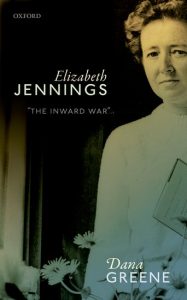 Dana Greene is Dean Emerita of Oxford College, Emory University, and author of a biography, Denise Levertov: A Poet’s Life (2012), which is a most distinguished predecessor to this new volume on Elizabeth Jennings.  The book contains twenty chapters and an epilogue, followed by comprehensive notes [pp. 191-229] and a bibliography [pp. 232-245] that lists archival material, those consulted about her, Jennings’s own poetry and prose in chronological order, and a raft of secondary sources. To fully appreciate Professor Greene’s work, however, one needs to have Jennings’s Collected Poems to hand, so as to be able to follow her development in detail. This is not a book to be read in a hurry!

The subtitle of the biography needs to be taken entirely seriously, as it was chosen by Jennings herself from the work of another poet (Marianne Moore).  This phrase is only too appropriate for Jennings’s intolerable inner conflicts, which she attempted to elaborate in her own (unpublished) autobiographies, and it also illuminates her biography (also unpublished) of Gerard Manley Hopkins, a person like herself who suffered almost intolerable conflicts. Readers, however, need not take seriously reference to Jennings as ‘this ramshackle woman’ [p. xiii; cf. the photograph of her with her sister on p. 162]. The simple explanation of her clothing is that like many others she had a lifelong habit of dressing to keep warm.  Fully to understand how she and other women lived in Oxford and beyond would require at least one chapter of ‘social history’ covering the time of her birth (1926) to her death (2001), given the aftermath of World War I and the grim years of World War II which left even comparatively well-off families struggling to sustain a decent life.  The biography does, however, include some reflection on her family background and her miserable experiences as a youngster with a Roman Catholic culture, which in part explain the unhappiness of a person expressed in attempted suicides and mental breakdowns.

Jennings was indeed privileged in her schooling at Oxford High and then at St Anne’s Society for Home Students (later given ‘College’ status).  She was one of two hundred young women in that society, themselves in minority in war-time Oxford bereft of many of its men, though not, fortunately, of the Dominicans and Jesuits who befriended her. The problem was that there was nothing predictable or manageable about being female, unmarried and possibly unmarriageable, educated and with the talents of a significant poet.  She had the great courage to resign from job security (as an unqualified librarian) to support herself by writing, and so was frequently short of money – yet another source of deep anxiety. Despite everything, in ‘moments of grace’ poetry poured out of her.

Moreover, whether she liked it or not, through her poetry she became a theologian in an age when women were supposed to be incapable of anything of the kind and other poets found religious conviction problematical. Those concerned with ‘incarnational’ religion should attend to her own perceptions of the inter-relationship of two items of her prose work, Every Changing Shape (1961) and Christianity and Poetry (1965).  Some of her readers understood her importance, and Durham University offered her an honorary DD, but unfortunately she was enduring her final illness and was unable to receive it.