C. S. Lewis opens the preface to his little-known collection Rehabilitations and Other Essays by saying, ‘A man is seldom moved to praise what he loves until it has been attacked’. [1] I’m not saying this is the primary motivation David Brown and Gavin Hopps had for writing The Extravagance of Music, but it is clear they are responding to a line of theological thinking about music that has — up until now — been the predominant voice but that needs substantial correctives. 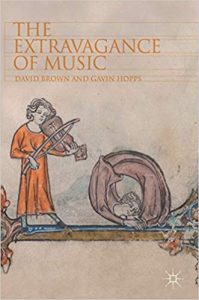 Frank Burch Brown’s generous foreword is nearly worth the price of the book itself. Burch Brown recognises the difficulties that lie ahead for Brown and Hopps. In the world of theology, music is suspicious; it is ‘forever getting itself into trouble’. [2] If music is indeed the most abstract art, and indeed it is one that seems to depend so much on personal taste and experience, it is not surprising that theologians seem to prefer to leave well enough alone. Rather than being apprehensive about music, however, Hopps and Brown recognise the possibilities inherent in ambiguity. Burch Brown identifies this as a key shift in theology: expanding the parameters of theology to allow music to be a means of reshaping the way theology is done. The initial tremors of this shift have resulted in a book that takes to task the prevailing — if not outright shallow — theological treatment of music as being merely illustrative or as providing analogies to theological thought. [3] That one of the primary ways this is done is through gracious engagement with lead thinkers in the field results in a book that is pertinent, timely, and decisive.

The book is split into two clear sections, with David Brown authoring the first part and Gavin Hopps the second. The aims of both are largely similar, with Brown using examples from ‘classical’ or predominately Western art music, whilst Hopps wades into the contentious realm of popular music to formulate his arguments. [4] Hopps introduces two corresponding models that provide the framework used by both throughout the book and which disclose two main ways music may be seen as ‘extravagant’. Music can, according to Hopps, be ‘disclosive’ in that it can reflect or disclose something of the ineffable, and it can be ‘affective’ in that it can draw the listener into communication with the divine. [5] This two-directional movement, ‘from God to music’ and ‘from music to God’, [6] is a helpful approach both use to articulate the possibilities in music.

In Part I, Brown first addresses the misgivings of those dubious of the role music might have in extra-scriptural interpretation or experience. There is a sense Brown is frustrated that this conversation is even happening at all, as he continually references the sheer profusion of his writings on the subject already. This, however, does not strengthen his argument, as those theologians committed to the primacy of Scripture do not find their concerns clearly addressed. Rather, though Brown admirably attempts to open the conversation to allow for a generous God that is not bound by the revelation contained in Scripture, this results in a discussion of the ‘divine’ or a sort of hazy ‘spirituality’ that easily adopts a theology not necessarily identifiable as ‘Christian’. [7] Brown’s ambiguity, intended to open and expand the conversation, tends to actually say very little at all. [8]

Brown then shifts the conversation from approaching musical analysis through the eisegetical lens of existing dogmatic claims to allowing music to challenge or ‘interrogate’ listeners, or allowing music to exegetically speak for itself. [9] The examples he chooses range from the entirety of the Western classical canon and speak to the vast musical knowledge of an enthusiast. Most compelling is Brown’s commitment to discussing primarily instrumental or ‘absolute’ music, noting that when text is used it tends to take a central role, obscuring the music qua music. [10]

Hopps, in Part II, continues with the concern of music’s ability to engender religious experience but expands the field to include popular music. Hopps engages masterfully with the arguments of Roger Scruton and Jeremy Begbie, two of the thinkers at the forefront of this field. Graciously recognising the achievements of both in advancing the cause of music within the realm of theological engagement, Hopps is nonetheless critical of ways their particular approaches are limiting. Especially helpful is Hopps’s hospitality – à la Trevor Hart’s ‘kenotic civility’ [11] – toward less ‘serious’ modes of music-making (especially the contentious areas of ‘kitsch’ and sentimental music) as particularly able to afford ‘extravagant disclosure’ of the divine in surprising places. [12]

Hopps then turns to a discussion of the rise of ‘new musicology’ made popular in the 1980’s to further his argument. This strand of musicology turned from formal and structural analysis of music to how we perceive or experience music in our particular cultural contexts. Hopps’s focus on what he terms the ‘listener’s share’ allows for music as an event or activity to include the listener and his experiences and possible transformations to be a valid construct of musical meaning. Further to this, I might add a corollary: what might be termed ‘the performer’s share’. Brown begins to allude to the ways a performer can communicate during a musical event; [13] the possibilities opened by engaging with music as an interpreter or conduit between the score and the listener surely are ripe for further investigation. [14] One potential weakness with Hopps’s section is more of a quibble: his over-reliance on song lyrics betrays that his residence lies more comfortably within the fields of literature and poetry than necessarily in music. His arguments would be more compelling if he would critique the music of the music he is discussing; however, this speaks more to the failure of musicologists to be taking up theological conversations.

That this book exists at all gives me, as a performing musician, hope that my art is indeed not only meaningful but necessary as an agent to afford experiences of God. This book must necessarily be a beginning: it calls for further engagement by various theological streams (it wants a response from Christian orthodoxy and from a complementary Reformed perspective on music) as well as by performing artists and musicologists. It is a luxury to be able to be at all critical of a book such as this. To echo Burch Brown: ‘I wonder at this book. It is full of wonders’. [15]

[4] It is increasingly problematic to attempt to categorise music as ‘classical’ or ‘popular’ because of overlap, blurred lines, or even the growing awareness of musics that do not fit comfortably in either category; but I will use these terms — as Hopps and Brown themselves do — as they are conventionally understood.

[8] I think this equivocation is due primarily to Brown’s decision to say less – to avoid saying something he does not want to say, and to leave interpretation open – even open to misinterpretation. When Hopps quotes Brown further (196), Brown seems keen to remain within the realm of Christian orthodoxy.

[14] Most organically, this is seen in live concert performances of Western art music, where the performers routinely engage with music written by someone else, to communicate meaning to a third party. However, the same idea could hold in the popular performance realm, perhaps with DJs, who reconstitute meaning based on the formation of playlists and sampling, thus hearkening back to the venerable tradition of the mixtape.