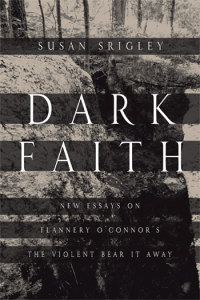 Flannery O’Connor belies easy stereotype. Her deepest narratives rest in the broader story of the sacramental journey of our humanity. Through the complex characters introduced in The Violent Bear It Away, O’Connor walks a tightrope between the pitfalls of religious fundamentalism and the cold voice of rationalism with an eye for self-giving love.

It is this unique religious vision glimpsed within O’Connor’s final novel that Dark Faith seeks to unpack. The collection begins with Richard Giannone’s look at the eschatological aspects of darkness, sin, and hopelessness as precursor to faith and transformation. Giannone, Professor of English at Fordham University, points to O’Connor’s very real concern for the suffering of unbelievers for whom belief has become burdensome. O’Connor finds hope in the unbeliever’s hopelessness that points toward the soul’s purgative need for darkness in order to progress toward divine union. To accomplish this, she places her characters in spiritual catch-22 scenarios that deny easy or cliché resolution.

Tugging upon the knot one of these characters find themselves within,  John F. Desmond, Emeritus Professor of English at Whitman College, provides an excellent analysis of the character George Rayber and the ideology that holds him fast. In short, Rayber’s love of both the rational and the romantic act as defense mechanisms against his own dark and untraversed interior world; it is an outlook, according to Desmond, which is purposely vacated of mystery and propped up in a self-protective reducto ad absurdum. Desmond thus reveals how Rayber’s ascetic self-denial yields the unintended consequences of shielding him from the yearnings of his own heart.

Seeing herself as an “imaginary orphan,” O’Connor’s narrative landscape is uniquely populated by both orphan and outcast, and she draws on her own experience to create characters through which she readily identifies. Gary M. Ciuba’s insightful and surprisingly tender piece, “Not His Son” helps us place “the desolation of these orphans” into O’Connor’s broader framework of unlikely families. As he will reveal, biblical metaphor abounds in Francis Tarwater’s “violent adoption”: ripped from the womb (Garden) and thrust out, Tarwater finds himself cursed, stigmatized and alone in a world that subsequently hates him.

Ciuba believes Tarwater is a pawn to his own ideological tug-o-war. The cold, calculated fulfillment of this calling, violently bestowed, merely perpetuates the ongoing cycle of ideological violence; one in which Bishop becomes the biblical scapegoat, innocent and unyieldingly loving.

Jason Peters’ insightful essay on abstraction and intimacy in The Violent Bear it Away isolates the importance and the scandal of particularity. For O’Connor, it’s not about a life, but the life. He explores O’Connor’s own exploration of what she believed was a Manichaean dualism that feeds off the hatred of the physical, leaving Christianity to become an abstraction with no bearing in the real world. But for O’Connor, the Incarnation baptizes the local, the particular and the person in the sustaining glow of holiness.

Ruthann Knechel Johansen brilliantly compares and contrasts O’Connor with her own muse, Simone Weil. Weil, like O’Connor, poses the question, “which is better – to have no freedom of choice and do only good or to have the freedom to do good or evil and end in destruction?” Johansen believes that “Bishop becomes the novel’s fulcrum on which refusal of obedience or the desire to obey hinge” (109). Seeking to answer Weil’s dilemma of the doomed will, Johansen explores four primary obstacles to Divine obedience as evidenced in the narrative paths of Rayber and Tarwater: the peril of egoism, an assaulting devil, hindered senses, and the comprehensive struggle to hear.

Karl Martin’s essay takes us on a journey through O’Connor’s adoption of the Gospel of Matthew’s (chapter 11, verse 2) from which the book takes its title. He reasons that O’Connor is inviting us to consider how Mason Tarwater and Bishop Rayber “are emblematic of different paradigms” of the prophetic gospel (161). He goes so far as to suggest that “rightly considered, Bishop may be the novel’s true protagonist, the character whose very presence determines many of the novel’s most significant episodes” (158). Thus O’Connor means for us to see Bishop, whose very name voices the priestly role, as a bringer of grace and a living portrait of what is intended in the gospel.

The volume’s editor, Susan Srigley, pens the final contribution, a probing look into asceticism and abundance. O’Connor, writes Srigley, presents her reader with a vision of individual personhood that is perfected and expanded through community. In so doing, she channels Bonhoeffer who, in Life Together, insists similarly upon an individuality lived out among the communion of saints.  As such,  we may find O’Connor’s understanding of asceticism and abundance crystallized in the Matthean epigraph that forms the title.

With one of the best essays of the lot, Srigley brings to a fitting conclusion a wonderfully satisfying collection of essays that celebrate the polyvalent character of this brilliant novel. Flannery O’Connor, a deeply prophetic and compassionate writer, shares her own dark faith through her work that bears away the kingdom of God not with violence, but with love.