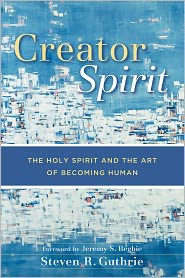 In what is a timely and relevant book, Steven Guthrie offers an expert map through some rather difficult interdisciplinary terrain. Perhaps the most helpful feature of Creator Spirit is the way that it challenges certain myths about the relationship between art and spirituality inhabiting contemporary thought. Some of these rather potent phantasms include:

But Guthrie does not simply reject these myths. To his credit, he also finds an element of truth in each one, and so presents a vision of artistic inspiration that avoids the promethean artist who seeks a “free inspiration,” as Benedetto Croce put it, and the “mouthpiece” artist, who is merely a vehicle for the agency of some “other.” By bringing a robust Christian theology of the Holy Spirit into conversation with others who explore the relationship between art and spirituality, Guthrie offers a viable alternative to the dialectic between modern and post-modern thought that plagues much contemporary thinking on the arts.

Creator Spirit is divided into three parts, and I will consider each part in turn. His first section focuses on the way that art contributes to the personal, embodied and communal dimensions of human life. His primary point here is that the aim of the Holy Spirit is not to take us ‘outside’ of our humanity, but actually to draw us even deeper into it. He drives this point home through a fascinating exploration of John Coltrane’s A Love Supreme.  But the most exciting portion of this first section comes in his third chapter, “Remaking Community,” where he dives deeply into the Pauline connection between being filled in the Spirit and singing songs in community (e.g. Rom 15:5-11, Eph 5:19-21, Col 3:14-16). Guthrie argues that these passages point towards music as “a way of being the body that is the church” (81).

The second part focuses on the relationship between the Holy Spirit and artistic creativity.  Guthrie rightly challenges the assumption, in both Platonic and postmodern thought, that inspiration takes possession of human abilities with a theology of the Holy Spirit as gift: that is, the Holy Spirit gives to humanity their freedom and voice. When it comes to actually describing the creative process in light of the Holy Spirit’s work, Guthrie has very little original to say. He is primarily interested in the artist’s “experience” of his or her work being “received” from outside.  This “experience” is one reason why people develop theories of inspiration, and it is the reason why Guthrie develops a “Christian theological framework for artistic inspiration.”  Guthrie’s move here from the artist’s “experience” to a theological framework does raise some methodological questions, which his book does not fully address.

His third section focuses on the relationship between the Holy Spirit and the discernment of meaning and beauty in art and the world. In his chapter, “Seeing the Spirit in All Things, Seeing All Things in the Spirit,” he helpfully contrasts the view of discernment as seeing the “spiritual” in everything with discernment as naming. According to Guthrie, discernment is not a matter of looking beyond physical appearances but actually looking more deeply into them. In his last two chapters, Guthrie takes on the topic of beauty—a topic far too big for two chapters.  He centers his understanding of beauty on the crucified and resurrected Christ, and he envisions the Holy Spirit as perfecting all humanity toward this beautiful end.  Not surprisingly, he employs this theological aesthetic to critique watered-down versions of beauty as mere subjectivity, prettiness and superficiality.

Before some concluding remarks, I want to make two further general observations: one about theology and the other about art.  In regards to the theology of Creator Spirit, it is shaped by an insightful reading of Scripture, the so-called “trinitarian renaissance” in contemporary theology, and Jeremy Begbie’s work in Voicing Creation’s Praise. In regards to the arts, Guthrie’s specialty appears to be music, and although he does engage with visual art and literature at times, these explorations betray a lack of expertise, and some of his main examples lack enough secondary literature for a critical engagement.

While Creator Spirit has its strengths and weaknesses, as a general assessment, it is a book that exemplifies the vitality and value of interdisciplinary research in theology today. This book opens up a variety of questions for further exploration, and it will be valued as a guide for these questions by readers both inside and outside of the academy.