Professor Berglund of Calvin College is an historian of what has become the Czech Republic. Working from formidable resources in archives located in Prague, Ljubljana and Indiana, together with published primary and secondary sources [343-359], Berglund employs history, humanitarianism, and architecture as a kind of sacred art to tell the story of Prague Castle.

Although those who read the book may well find that their appreciation of Prague Castle is transformed, it remains unfortunate that the present custodians of the castle do nothing to explain the significance of the building to the six million visitors who enter it and explore its exterior each year [341]. They need also to link the castle and their perceptions of it to the Church of the Sacred Heart in the Vinohrady district – unmistakably Roman Catholic – but for everyone a reminder of the ‘gift of freedom’. In response to that gift, the imperative need to be generous to those in desperate need of food and fuel in the years of the inter-war Depression [264-284], and to understand the priority to be given to public health if society was to remain stable. 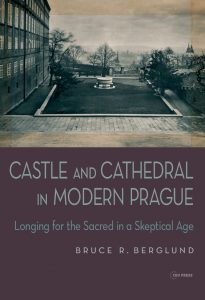 The central issue that preoccupies Professor Berglund is the relationship between three key figures, each of whom was profoundly committed to the future of Central Europe once the Hapsburg Empire had disintegrated by 1918 (the Ottoman Empire and the Russian Empire had also been eliminated; the subjects of the British and the French Empires had to wait their turn until after the Second World War). The first key figure is Tomáš Garrigue Masaryk, the ‘Philosopher in Search of Truth’ [19-61], and first President of independent Czechoslovakia (1918-1935).

Dying in 1937, he was spared the betrayal and abandonment of his country when Britain and France in effect conceded the Sudetenland borderlands of Czechoslovakia to Nazi Germany, seriously underestimating the new modes of imperial ambition which were to characterise Europe for most of the twentieth century. Masaryk commended a form of ‘civil religion’ to his fellow-citizens: ‘We have attained an independent republic because we ardently believed in our national ideals. We recognized and felt at our core something sacred. . . We had trust in other people and in the people’ [149], humanita – humanitarianism at its best [48-49].  Not the least of his difficulties was the fact that some brilliant Roman Catholic intellectuals (including those alert to the need for radical social and economic reform) found ‘civil religion’ to be inadequate without the intellectual and moral substance which only the Church could provide [203-212, 256-262, 304-308]. Protestants who had learned from Karl Barth also had reason to distrust ‘civil religion’ and its lack of conviction in the face of fascism and National Socialism, though singularly unhelpful in his reluctance to engage directly with practical politics.

The second key figure in Professor Berglund’s analysis is Jože Plečnik, the ‘Architect Creating for the Ages’ [63-108] who left Slovenia to work in Vienna and Prague, becoming a superb professor at Prague’s School of Applied Industrial Arts, some of whose students ‘shared their teacher’s ideas of architecture as a task done in faith and the artist as a servant of God’ [85]. A devout Roman Catholic, he was like Masaryk in the sense that he was austere, disciplined and moralistic, but ‘held to God not as the guarantee of truth but as personal anchor’ [108]. As Masaryk pressed for the renovation of Prague Castle to become the focal point of the new republic, it was crucial to persuade Plečnik to keep returning to Prague from his native Ljubljana [172-188, 218-230], and to inform and persuade those funding the renovation of the meaning of his design and its implementation. The book’s illustrations are invaluable here.

In this connection the third key figure in Professor Berglund’s work comes into view in her own right and is certainly invaluable both to her father and to Plečnik.  Alice Garrigue Masaryková, ‘The Social Worker Longing to Serve’ [109-143] was a most exceptional person.  She was the daughter of Masaryk and his American wife, Charlotte, who was regarded as the heart of the family.  A year-long stay in Chicago alongside the pioneers of public welfare work based on rigorous social analysis taught Masaryková much about community organisation, education and health care planning [110, 118-133].

Like her father, she had light to formal religious commitment though more sympathetic to its institutional expressions, whilst insisting that faith must be manifest in deeds.

In her case, once back home, she founded and directed the Czechoslovak Red Cross, and, as a teacher, had the highest aspirations for her female students. In addition, both the YMCA and the YWCA received her attention – all three embodiments of her father’s ‘civil religion’ [242-246, 308-311]. Since the work of Plečnik was also close to her father’s heart, she did everything possible to support his plans and to interpret them to others, both before and after the disaster of the Second World War [328-330].

Professor Berglund’s work is admirable, though I would suggest that to begin to comprehend Czechoslovakia, readers need also to identify work which will illuminate for them the horrors of occupation and resistance during the war, followed by being overrun by a regime anything but sympathetic to Masaryk’s statesmanlike ideals, let alone those of either Plečnik or the remarkable Alice Masaryková. Nor should one take for granted in Europe that religious institutions may not recover. Roumania, for example, has seen an extraordinary revival of monastic life for women as well as men.