This collection of short essays titled Both Sides of the Wardrobe (several of which were presented at the 2013 C.S. Lewis Symposium at Atlantic School of Theology) strikes a healthy balance between academic questioning and addressing the everyday concerns of Christian life. Rob Fennell summarizes the book’s aim in the “Invitation to the Reader”: to explore the writings of C. S. Lewis in order to “inspire and provoke contemplation of God’s presence in your life and in our world.”[p. ix]

Michael Tutton begins the collection with “Quiet Scenes in The Chronicles of Narnia.” This essay explores a recurring motif in the Narnia stories: a child having a private, prayerful, and transformative encounter with Aslan. Reinforcing his analysis with ideas from Lewis’s non-fiction, Tutton explores the Trinitarian nature of these encounters, and briefly reflects on the need for such prayer in the Christian’s life. 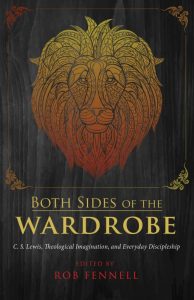 David J. Hawkesworth next provides “A ‘Short’ Theology of Narnia.” After showing how Lewis sees true magic as working with nature, Hawkesworth uses Thomistic categories to argue that Narnia’s Deep Magic and Deeper Magic do not represent lex moralis and lex o naturalis, but rather embody in nature alternate sides (justice and grace) of God’s lex aeterna.

Brenton D. G. Dickieson gives an insightful examination of the theme of cruciformity in “‘Die Before You Die.’” After setting out the principles of Lewis’s understanding of a cruciform life (through a reading of The Problem of Pain), Dickieson shows how these principles are incorporated into the stories of Eustace Scrubb and Orual.

Chris Armstrong examines a similar theme from a different perspective in “‘Ticket to heaven.’” Armstrong first shows how Lewis’s theology of dying to self was influenced by the Theologia Germanica, then points out the contradiction between this and Lewis’s other writings on desire as a path to God. Are Christians continually dying to their selves and their desires, or should they rather find God through their desires? Lewis’s writings, says Armstrong, do not successfully resolve these alternative possibilities.

In “Apologist Transposed,” Laurence DeWolfe describes Lewis’s preaching, showing how his sermons seek to teach, to delight, and to persuade, just like his apologetic works: “his sermons were no less arguments for the good sense of Christian belief than his better-known essays and published addresses.”[p.67]

Gary Thorne offers a valuable critical perspective in “Baptized but not Sanctified,” where he compares The Chronicles of Narnia with Phantastes. Though he humbly hopes that others can resolve the problem he sees, he concludes, “In Lewis’s work, the fairy tale is always pressed into service and becomes allegory. McDonald allows it to remain fairy tale.”[p.74]

In “Red Tights and Red Tape,” David Mark Purdy argues that The Screwtape Letters is not a satire, as is usually supposed, but what he calls Screwtapean fantasy, whose primary characteristic is double inversion, a moral inversion which undermines previously held beliefs.

Sarah Layman returns to The Chronicles of Narnia in “The Eschatology and ‘Amen’ of C.S. Lewis.” Focusing on The Last Battle, Layman shows how Lewis thought of the Second Coming not simply as an end, but as the beginning of the New Creation.

Finally, in “The Space Between,” the most philosophical and technical of the essays, Wayne G. Smith explores the concept of the wardrobe as a threshold, using the analogy of birth to understand transformational ontology.

On the whole, this fine collection of essays is contemplative, without becoming sentimental or preachy, and insightful, without becoming dry or pedantic. Of course, there is the occasional exception; Robertson and DeWolfe tend perhaps toward description over analysis, while Smith’s dense philosophical style seems rather out of place in this volume. But the majority of the essays are thought-provoking and a pleasure to read. The essays by Armstrong and Thorne, in particular, keep the book from being another paean to Lewis, pushing its readers to think beyond Lewis’s writing in their reflections on theological themes. Both Sides of the Wardrobe succeeds in its goal of aiding readers’ contemplation of God’s presence in the world.