The fruit of a 2006 colloquium hosted by the Institute for Theology, Imagination and the Arts at the University of St Andrews, this collection of essays offers a multi-disciplinary exploration of eschatological theology engaged with the arts. Cultural artefacts of painting, literature, drama, architecture and music — and findings from other academic disciplines — are the raw material from which these essays develop ‘patterns of promise . . . [for] hopeful living in a present which, although marked by sin and death, is grasped by faith as already pregnant with future.’ (4)  The volume will be of interest primarily to scholars and students, but also to general readers of theology and practitioners of the various artistic media examined, and makes evident the value of such interdisciplinary study for speculating on ‘the shape of things to come . . . which, promised by God but transcending the conditions of historical existence, can only be engaged with imaginatively.’ (3) 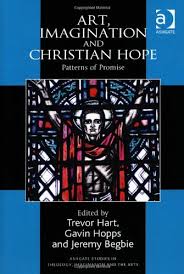 The opening essay of the collection, Richard Bauckham’s “Time, Eternity and the Arts”, profoundly, if demandingly, engages with the human experience of the ephemeral, and divides into two analyses:  first of Virginia Woolf’s novel To the Lighthouse and second of Claude Monet’s paintings from the 1890’s forward.  This structural division recapitulates a key theme of the essay, which contrasts the “synchronic” and “diachronic” ideals of eternity — personified by Woolf’s Mrs. and Mr. Ramsay — and their corresponding eschatological visions:  ‘escape from transience through the eternalizing of precisely the transient moment’ and ‘redemption from evil through the attainment of a future goal.’ (19)  The essay’s many intriguing reflections include the speculation, derived from meditation upon Monet’s water lilies, that eternity might be envisioned as ‘the recovery of every moment of value from the past in which it has perished with time.’ (30)

Paul Fiddes’ contribution concludes with a similar thought, suggesting that ‘we might conceive of a God for whom the past is still open to transforming vision, and with whom the past is being brought . . . into an ever widening reconciling context.’ (49)  This accessible essay, subtitled “Listening to Shakespeare, Blake and T.S. Eliot” discerns four models of hope and eternity from  the work of these three poets.  Especially valuable is Fiddes’ rubric for reading Shakespeare’s tragedies, in which the tragic hero is perceived as beginning his dramatic career with an intuition of some good at odds with society; then lapses into forgetfulness and his previous assumptions; before finally experiencing a revival of pure vision at the threshold of death.  At multiple levels, this imaginative description of character arc showcases the power of art to incite a transforming reengagement with the ultimately real.

Next, A.N. Williams passionately assesses the ‘eschatological dimensions of Christian architecture,’ (51) picking out as examples three structures from different eras:  a third century baptistry in a converted Christian house at Dura Europos, the sixth century San Vitale in Ravena, and the twelfth century Saint-Denis in Paris.  In each case, she argues, ‘its integral décor does not merely house the liturgical rites for which it was designed, but reflects and magnifies them.’ (51)  For example, the mosaic depicting Abraham’s hospitality above the San Vitale presbytery takes on christological significance, she argues, because of its embeddedness at the site where the eucharistic elements are transformed, and so impresses upon the viewer a simultaneous sense of past prefigurement, present enactment, and eschatological fulfilment.

Following this is Bruce W. Longenecker’s reading of the Nobel Prize-winning novelist José Saramago’s The Gospel According to Jesus Christ, which offers a Richard Dawkins-like revision of the Gospel narratives, wherein God the Father is depicted as a vampiric addict for human bloodshed.  Longenecker argues that it is really ‘the moral reality of the Church which has triggered Saramago’s literary tirade against God,’ (138) and so what is needed in response is not traditional theodicy but what he calls “ecclesiodicy.” (145)  What this demands, he concludes, are better defences of the good things the Church has done in history, and an ongoing embodiment of Christ’s self-sacrificial love by living Christian believers.

In the penultimate essay, Gavin Hopps inspects the lyrics of contemporary British singer-songwriter Morrissey for intimations of hope beyond their surface-level pessimism.

Unusually sensitive to shades of possible hope, the essay observes, for example, in a song explicitly about blindness, that while the singer insists that he is ‘incapable of seeing “the good things,”‘ he also necessarily and simultaneously ‘posits their existence outside the darkness in which he stands.’ (154)

Such subtle perception bears a resemblance to the “Tenebrae logic” identified as operative in the singer’s own “hopeful darkness” (161), wherein, through a kind of illuminated vision, faith perceives — as in the traditional Tenebrae service — that ‘a single lighted candle remains, which is hidden — but not extinguished.’ (161 n. 26)

The volume closes with Trevor Hart’s profound meditation upon the interrelationship between literary tragedy and Christian hope. Astutely engaging with the relevant scholarship, he contributes by underscoring the importance of J.R.R. Tolkien’s theory of eucatastrophe for conceptualizing the lived experience of the tragic.  One need not fully agree with the expressed theological disposition whereby “the gravity of sin and its corruption of [creation’s aboriginal] goodness in the texture of human experience can hardly be overestimated,’ (187) to appreciate the depth and breadth of insight into the meaning of Christian hope exhibited by this essay, which finishes the collection on a high note.