This new recording from St. Salvator’s Chapel Choir, directed by Tom Wilkinson from the University of St. Andrews, explores scriptural annunciations – moments in which God reveals himself or interacts with his people. In addition to ten pieces from five well-known composers of sacred music, six next-generation composers from TheoArtistry’s Composer’s scheme join the repertory of sacred music on this CD with their new compositions.  The Composer’s scheme, which matched six theologians with six composers to create new choral compositions, is the first of its kind from the Institute for Theology, Imagination, and the Arts.

For this project, each theologian researched an Old Testament annunciation passage then met with their assigned composer over the course of a few months, collaborating on text and meaning. Under the mentorship of Sir James MacMillan, these composers each created a new work of sacred music. 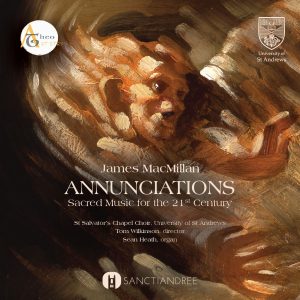 The fruit of the project – six exciting new sacred choral compositions – shows what can be accomplished through collaboration between talented composers and trained theologians. While no particular profession of faith or spirituality was required for composers in this project, the sacred ideas and texts speak for themselves through the music inspired by the collaboration with theologians. These works are stunning and show how theological ideas can be explored musically to bring out particular ideas.  The works add to the body of sacred music and help continue its precedence in the twenty-first century.

Works by Sir James MacMillan, John Tavener, Kenneth Leighton, Benjamin Britten, and Judith Bingham surround the six new works of Old Testament annunciations with the New Testament annunciation of Gabriel to Mary [Luke 1:26-38]. MacMillan’s A New Song is aptly placed before the six new works in the recordings, as it itself is an annunciation of the music to come.  Invoking Psalm 96, the trills of this piece coupled with the organ below the voices creates an eerie atmosphere that falls away when the organ rises to its joyful culmination.

The first of the new compositions, Hinneni, begins fittingly with the first humans – Adam and Eve [Genesis 3]. Composer Anselm McDonnell and theologian Margaret McKerron explore two points of God’s grace in salvation history: Adam and Eve after their sin and subsequent shame, and Christ’s redemption of sin in the crucifixion. The interplay of voices and crunchy dissonances present the anguish of these moments in salvation history with musical acuity.

Composer Dominic de Grande, in consultation with theologian Marian Kelsey, weaves the story of Jacob wrestling the angel [Genesis 32:22-32] into a dream-like composition. In Whilst Falling Asleep, Savta Told Me of Jacob, the whistling that accompanies the voices in the background harken to de Grande’s own grandmother telling bedtime stories to him as a child, and adds to the ethereal feeling of the piece.

The organ of the third new work, Exodus III, evokes the idea of flickering flames that do not burn, a constant moving accompaniment under the voices. Interestingly, theologian Rebekah Dyer is a fire spinner and composer Kerensa Briggs brought the experience of watching Dyer perform with the flames into her musical setting of Moses and the burning bush [Exodus 3]. The solo voices suggest chant, the music of the early church.

God Calls Samuel conjures what an experience of the voice of God might induce in a young boy. Composer Sean Doherty and theologian Caleb Froehlich imagined how young Samuel could experience God’s call, and the subsequent prophecy of the destruction of the house of Eli – his guardian and high priest – as a nightmare [1 Samuel 3].  The increasingly disjointed voices and heightening tension in the music evoke the fear one might feel at such an experience of God.

In the fifth piece, Elijah goes up the mountain to watch the Lord pass by, but the Lord is not in any of the great natural acts; instead, he is in the silence [1 Kings 19]. Composer Lisa Robertson creates moments of silence throughout The Silent Word Sounds, and invokes the sound of wind with the voice. She and theologian Mary Stevens do not shy from the paradox of the great, mighty God being in the nothingness.

Theologian Kimberley Anderson and composer Stuart Beatch reimagine a passage from the Song of Songs in Beatch’s musical composition [Song of Songs 3]. The Annunciation of Solomon draws from the biblical text as well as Milton’s Paradise Lost to celebrate love in today’s world. The shimmering voices and organ draw one into the sensual nature of the text.

The last four works of the recording are from MacMillan, Benjamin Britten, and Judith Bingham. These return to the New Testament with the first exploring the angels’ annunciation of Christ’s birth to the shepherds. The following two – Britten’s Hymn to the Virgin and Bingham’s Annunciation I – return to the annunciation to Mary that opens the CD.  It fittingly ends with MacMillan’s O Radiant Dawn, joyfully heralding the fulfillment of Isaiah’s prophecy in Christ’s birth.

The culmination of the partnership between theologians and composers is a testament to what can be accomplished through collaboration, particularly between those highly trained in their own disciplines.

True to TheoArtistry’s tagline, these works reveal the power of the arts to communicate the divine. Each new piece focuses on an aspect of the scriptural passage, bringing out different truths of God.  Just as we experience in God Calls Samuel the awe and terror of an encounter with an all-powerful God, each piece highlights different aspects of our relationship with the divine and evokes various sentiments in the listener. The new works are moving, thought provoking, beautiful, and aligned perfectly with the great sacred works that surround them on the recording.

However, words cannot compare to experiencing the music. I suggest you listen to the music itself and see how it moves you.