Editor’s Note: This is the first installment of a two-part review.  Click here to see Part II.

From 6thto 15thApril 2018, The Transept – a group of practicing artists within the Institute for Theology, Imagination and the Arts (ITIA) – put on a major event titled After the Call, which invited artistic exploration of beauty in both the ordinary and the unexpected, around the theme of being ‘called’ and what happens after the call.   The event consisted of an art exhibition and a performance in which ITIA postgraduates and friends presented original works inspired by the ‘Annunciation’ passage in Luke 1:26-38 and the notion of a ‘calling’. Both the exhibition and the performance were hosted at Saint Andrew’s Episcopal Church in St Andrews –  more than fitting, as the church is a hub of the community, located at the transept of the university and the town (a true ‘Town and Gown’ location); and its Rector, Revd Professor Trevor Hart, is also a co-founder of ITIA, further connecting this location to the university, and to the arts.

Artists who displayed their works in the exhibition were Liz Crichton (also the exhibition coordinator), Dan Drage, Rebekah Dyer, Sherrill Keefe, Letizia Morley, Dr Larry Scrimgeour, and Philip Wharton whose sculpture, Sapling, was donated to the School of Divinity here after being displayed on the altar in the Jesus Chapel at Manchester Cathedral from 2016-2017.

The exhibition used much of the entirety of the voluminous and strikingly beautiful church space – ranging from a large installation, titled Place, by Drage of tall reeds suspended from the lofty ceiling down fifteen feet toward the water of new life in the baptismal font below it, to the intimate use of the Lady Chapel by Crichton with a willow-woven, ‘trug’-basket boat with a beetroot-soaked sackcloth sail emblazoned with the cross of St Andrew –  the patron saint of Scotland to which this church is dedicated, as well as the patron saint of women who want to become mothers.  Made to reflect the Mothers’ Union banner in the church which depicts Mary nursing Jesus at the centre of the St Andrew cross, the boat and sail represent Crichton’s own spiritual journey as a woman who wanted but never had children, a regret and emptiness she carries with her.  Yet she is ever mindful of the prayers, hopes and dreams that docome to fruition by grace over time as God leads her boat over the waves, through the storms and makes the wind blow. Crichton included 40 paper lilies spilling out of the boat into a blanket of gold which calms the sea below.  She made one lily on each day of Lent while meditating on the purity and holiness of the divine and capturing the essence of the 40 days and nights of waiting. Entitled Call and Response, Crichton sees this piece as representative of the many voices and promptings she has encountered and her own progress in response. 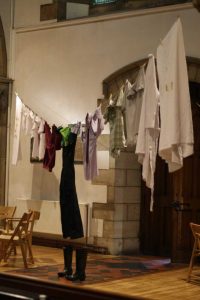 Drage and Crichton both provided several other pieces which also masterfully united the unique space of the church with the exhibit theme. Theirs were site-specific works, coaxed from time spent in particular corners of the church, including Drage’s sculpture, Light, in which he incorporated tubing to refract and play with natural light coming in from a corner window. Crichton also innovatively used ordinary items to craft unique and thought-provoking images around themes of accepting and becoming in the midst of a calling – including a string of everyday garments stretched across the back of the church which represented the human lifecycle from infancy to old age, and a video loop of waiting for things, like laundry in a washing machine.

Rebekah Dyer cleverly and artistically reflected on her experience as a doctoral researcher and the indelible imprint it has left on her.  In one of her works, Cast Off, she depicted her‘call’ in casts of faces (masks) made from notes from her thesis.  With an interesting use of a windowsill to emphasise a cascade of masks – things that shape us –  she invited exhibit-goers to ask themselves what new growth awaits in their final cast.

Inspired by the natural world, Keefe, like Dyer and Drage integrated the use of a window to present her piece – a mixed media image on a semi-translucent surface to catch the muted light coming through the stained glass.  This placement opened the piece to the interplay of natural elements such as sun, cloud and moonlight with subtle, moment-to-moment changes that work on both the surface and the eye of the viewer.

A stay-home mother, Morley finds it challenging to pursue her art, and her selection for After the Call represented this struggle between mother and artist. She has pursued a wide range of mediums and interests: oil landscape painting, medieval-style illuminated calligraphy, watercolour painting, photography, digital painting, portraits and life drawings in graphite, but it is her comics which most embodied the nature of ‘calling’, as she navigates the seemingly opposing calls of mother and artist.  Morley displayed comic booklets depicting motherhood in a contemporary realist and humourist style, and an oil painting titled Distant Shore, both of which also provided subject matter for a monologue she delivered at theAfter the Call performance on Wednesday, 11th April. 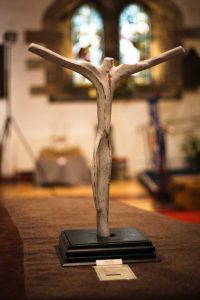 Scrimgeour, an alumnus of the School of Divinity here, created ‘endless mandalas’, an ancient craft of the Celtic scribe in which the pattern is formed by one single strand, symbolising infinity and eternity, without beginning, without end. Inspired by the annunciation of the Good News by ‘local’ Saints Ninian and Columba, Scrimgeour fashioned the mandalas for this exhibition in trinitarian and cross images.  These were displayed as banners on the choir stalls in the chancel, and in a stunning long image of his ‘Shema Cross’ which adorned a seven-foot-tall wooden cross which annually stands in the church sanctuary from Good Friday through the Easter season. Scrimgeour describes these as abstract, enigmatic, iconic symbols of Pictish Paganism becoming Celtic Christianity.

Wharton’s Sapling, a cruciform sculpture crafted from wood and white-washed with acrylic, was borrowed from its new, permanent home in the School of Divinity to display as part of the exhibit, as it fit so well with the theme. Saplingwas sparked by a few things Wharton felt connected to, most poignantly, the heartfelt loss of a friend’s young son. Wharton commented, ‘I’d hope the presence of this piece is felt as one of pivotal transition. From one state to another. One form to another.  A beginning, not an end. I set out with a wave of ideas, all demanding to be heard in their own unique way. And it’s often not possible. So, I set out to present a collective presence.  Not everyone’s take is intended by the artist. But every sense of good will, peace and hope here, is.’

The church itself served as an exhibitor as well, offering to the space its soaring ceilings, arching structural lines, stately columns, noble choir stalls, colourful stained glass windows, versatile surfaces with which artists could interact, and quiet corners that afford space for contemplation.  One of the most beautiful and unique aspects of the After the Callexhibit was indeed this stunning canvas of the church itself among which the artwork could come alive and find its voice and purpose. 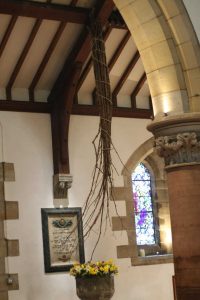 Even the outdoor space of Saint Andrew’s Church was integrated into the exhibition, as a Stones of Promise labyrinth was built in the memory garden just outside the main entrance.  Members of the congregation and community brought decorated stones to the church during Lent for the construction of this temporary labyrinth on Palm Sunday and that served as a contemplative activity during Holy Week, Easter, and as part of this exhibition. People decorated their stones with images that represented promises they wanted to make in their own lives and regarding their own callings.

Theology, Imagination and the Arts

The labyrinth, the church space and the creatively and thoughtfully integrated artwork of After the Call was a refreshing example of what can happen in the interplay of theology, imagination and the arts, and when we bring the world and its art into our churches.  Ordinary meets sacred and they merge until the divisions blur, just as our ‘calls’ move from moments of inspiration beyond ourselves to action and engagement in the world. Drage noted that each piece in the exhibition has come to embody a question about the sense of a call: ‘Might it abundantly stream down in a very specific time and place?’  ‘Might it be as persistent as light through a window?’  ‘In all,’ he commented, ‘the normal becomes transcendent’.  And, at times, as this exhibition proved, the transcendent becomes accessible in the ordinary.

Karen entered the PhD program in the Institute for Theology, Imagination and the Arts after careers in corporate management and consulting, followed by service in pastoral, social and theatre ministry. Under the supervision of Trevor Hart, she is exploring theological and theatrical contexts of ’empty space’ and general human disposition toward it, with emphasis on improvisation and Holy Saturday. Since 2017, Karen has led or advised ITIA’s Transept group, a postgraduate student-led group of multidisciplinary practicing artists. As Editor of Transpositions, she is fostering a closer partnership between Transpositions and Transept.

At 19 years old a mentor told me to watch the movie Donnie Darko for a ministry assignment. He didn’t explain why, and watching…