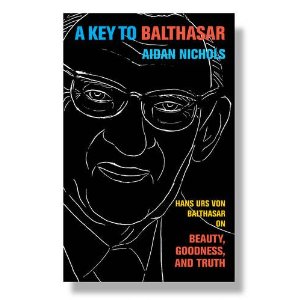 With ambitious effort, Aidan Nichols’ publication A Key to Balthasar condenses into four chapters the major terms and definitions of Hans Urs von Balthasar’s prolific theological writings.  Offering novel accessibility to these works, the everyday reader is more easily able to approach and enter into the goal of Balthasar’s writings.  The goal of Balthasar’s works, Nichols states, is to “encourage readers to holiness and to steady them in the praying life that flows from the theological virtues” (115).

Nichols offers four different “keys” to understanding Balthasar’s theology.  In the first chapter, he explains the fundamental key word “being,” which is necessary for understanding the whole of his theology.  Chapter two, defining “form,” lays the foundation for Balthasar’s theological aesthetics as found in The Glory of the Lord, explicating beauty.  The third chapter, defining “freedom,” helps to make the study of his Theo-drama accessible by explaining a theology of goodness through theological dramatics.  The fourth  and final chapter concerns the term “logic,” with an emphasis on Balthasar’s theology of truth in his third volume, Theo-Logic.

In the first chapter, Nichols also defines necessary background by, for example, defining the term “transcendental,” as well as summarising Balthasar’s influences on and views of the transcendental.  In a transcendental explanation of “being,” that which goes beyond any one particular category of explanation, this starting point is also where Nichols describes Balthasar’s theology as “ontological realism.”  Through the human powers and senses of seeing, touching, hearing, scenting and tasting, we are able to have “access to things as they really are: participations, varying in scope and intensity, in being itself [… and coming to know that…] the Ground and Source of such being is God” (2).

“Being,” most appropriately understood, is the likeness of the triune God.  Here, “being” reflects the unity of the self-being and self-giving of the three Persons of the Trinity.  Having its definition rooted in the divine plan, in the life, death and Resurrection of Christ, “being” is a communion.

With an introduction first to the transcendental, the student and everyday reader understand that with Balthasar, creation and revelation are a symphonic testament to the unity of beauty, goodness and truth, which are also accessible to and participated in by humanity.  In contrast to modern philosophy, Nichols explains, Balthasar understands the human person in immediate relation with the transcendental truth, which goes beyond itself, and cannot be separated from the beautiful, good, and true.  Here, in the first chapter, Balthasar’s vision of humanity is one of its finitude being inextricably related to that which is infinite.

The book continues by addressing the three qualities of “Being” within Balthasar’s theological vision.  In chapter two, Nichols gives body to the key term “form” while explaining the beautiful through Balthasar’s theological aesthetics.  Through the explained “theology of the senses,” the human experience of the beautiful rests in the unity of the definitely-shaped yet infinite reality, and also leads the mind into the sublime: that which can never fully be understood.  This reality also focuses Balthasar’s work Christologically, Nichols reveals, as he explains the “sublime” of infinity taking on the definitive form in the Incarnation of Christ.  Called by Christ, man is brought forward in (re)union with God through the revelation of Being in the Form of Christ.

In the third chapter, Nichols focuses on Balthasar’s Theo-drama, on goodness, and on the key term “freedom.”  Here, in building upon Balthasar’s own theology, Nichols follows by explaining the significance of drama in defining “salvation” as something more than a mere idea or narrative: salvation as action.  The notion of “freedom” is at the core of this dramatic action, at whose center is the playing-out of infinite and finite freedom.  The drama continues through the freedom of man in choosing to participate in Christ’s mission, and as Nichols explains, this drama assists man in understanding his humanity and its fundamental identity in God’s likeness (83).

In the final chapter, through Nichols’ examination of the key term “logic,” we come to an understanding of how Balthasar sees Christ as the truth of the world.  Here we also see how Balthasar’s work is symphonic in itself.  In the reality of Christ’s incarnation, and through the drama of salvation, he also brings with him a new quality of being – a new ontology – into the world (106).  Nichols here explains how Balthasar’s position on truth is ultimately about love, and a communion in which we are meant to participate.

In an effort to resurrect man’s understanding of his own fundamental identity being in God’s likeness, Balthasar has written his epic trilogy.  In an effort of accessibility, Nichols has written on Balthasar’s four “keys”: being, form, freedom, and logic, which are already one in God.  In his efforts of writing this theological trilogy, Balthasar seeks to explain how they are also all meant to be one in mankind.  In all being One, Nichols echoes Balthasar’s sentiment of writing for the encouragement of man to understand his identity and to strive for holiness.

This book is recommended highly to anyone seeking a greater understanding of the theology of Hans Urs von Balthasar, and to all who have an interest in beginning to understand the dialogue between this and other key theologians of the contemporary Church.  I would also highly recommend the complementary studies of the theologian Adrienne von Speyr, upon which Balthasar considered his own work to be heavily dependent.

Sarah Elizabeth Maple is a graduate of the Pontifical John Paul II Institute in Washington, DC.  She is currently a PhD student at the University of St Andrews in the Institute for Theology, Imagination and the Arts.  Her dissertation utilizes John Paul II’s theology of personhood to consider the “place” of the body relevant to the creative act, and with particular focus on the representation of the body in the 19th and 20th Century visual arts.

Sarah Elizabeth Maple is a PhD student at the University of St Andrews in the Institute for Theology, Imagination and the Arts, and holds her MTS in Marriage & Family Studies from the Pontifical John Paul II Institute in Washington, DC. Her dissertation will focus on the "place" of the body in consideration to the creative act. Using a theology of personhood, by way of John Paul II's "A Theology of the Body," she will particularly be focusing on representations of the body in the 19th and 20th Century visual arts.