They were both writers, dreamers, and storytellers, well-educated,[1] and raised in the Church.[2] They were only twenty years apart in age, born on separate continents.[3] As far as I can discover, they never met or encountered each other’s writing.

L M Montgomery, born in 1874 on Prince Edward Island, is best remembered for her 1908 classic Anne of Green Gables.[4] Dorothy L Sayers, born in 1893 in Oxford,[5] wrote in many genres, including detective fiction and religious drama. This essay will explore how these writers engaged with Christian doctrine in their art, focusing on Montgomery’s Anne of Green Gables and Sayers’s play ‘The Emperor Constantine’, specifically their relationship with the doctrine of God, the Father Almighty. In so doing, I will show how Montgomery’s and Sayers’s work imitate the work of God the Son in revealing the love and power of the Father in intricate and multi-layered characters, relationships, and storylines.

The first article of the Apostle’s Creed reads ‘I believe in God the Father, Almighty, Maker of Heaven and Earth’.[6] This part of the creed establishes God’s authority, power, and loving care over Creation. In her study of Job, Eleanore Stump emphasizes God’s generosity and relationality, his ‘personal and parental relationships with his creatures’.[7] Scripturally, the High Priestly Prayer may express the Father and Trinity best: the Son prays for future believers, ‘that they may all be one, just as you, Father, are in me, and I in you, that they also may be in us’.[8] The Son is one with the Father and reveals Him to the world: ‘Whoever has seen me has seen the Father’.[9]

Montgomery and Sayers both explored divine Fatherhood in their work, conveying this doctrine dramatically and incarnationally. I will begin with Montgomery’s engagement with this doctrine in Anne of Green Gables.

L M Montgomery was born in 1874 on Prince Edward Island, into a ‘close-knit community, united by kinship, culture, and religion’.[10] Her Scottish Presbyterianism faith tradition took Scripture and doctrine, including the Westminster Confession and the Short Catechism, very seriously.[11]

Montgomery disagreed with aspects of her faith tradition. Her letters and journals show that she rejected foundational doctrines, including the divine inspiration of the Bible and the divinity of Christ.[12] She preferred to worship and relate to God in nature. For example, once, she remembered escaping outside after a ‘dull’ Communion service ‘into the wine of God’s sunshine in his eternal communion that knows no restrictions or creeds’.[13] She called modern Christianity ‘overgrown with dogma and verbiage’. Most relevant to this study, Montgomery said she believed ‘in a God who is good and beautiful and just—but not omnipotent’.[14]

Despite Montgomery’s dislike of doctrine and rejection of foundational principles of the Trinity, the doctrine of God the Father and Almighty infuses her first and most famous work, Anne of Green Gables, like light itself, especially in Anne’s love for nature and relationship with Matthew, her human father.

In Anne of Green Gables, natural beauty testifies to a loving Creator-God: ‘The world looks like something God had just imagined for His own pleasure, doesn’t it?’ Anne claims Adam’s privilege of naming, giving ordinary places grand titles like ‘The White Way of Delight’. She exercises dominion by putting on nature’s beauty: wreaths of buttercups and wild roses or of rice lilies.[15] Anne of Green Gables shows almost nothing of nature’s violence; Anne wanders in safety like a daughter in her father’s house, or like Eve in Eden. 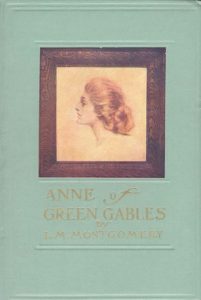 Alongside creation, Matthew’s human love for Anne also represents the love of God the Father. As Marilla, Anne’s adoptive mother, reflects early in the book, Anne ‘knew and cared nothing about God’s love, since she had never had it translated to her through the medium of human love’.[16] Shy, awkward Matthew translates the tenderness and protectiveness of God’s Fatherhood. Matthew is a gentle listener, patient and kind, such as when Anne daydreams and forgets to put down his tea and he ‘never scolded a bit’. He understands Anne, and she him, without words: ‘Matthew and I are such kindred spirits I can read his thoughts without words at all’. He provides for her gratuitously by giving her a pretty dress for Christmas. Matthew represents the tender, unconditional love of the Father God: though he and Marilla originally intended to adopt a boy to help him with farm labor, he tells Anne years later that he’d ‘rather have [her] than a dozen boys’ and calls her ‘my girl that I’m proud of’.[17]

Creeds and the Church

While nature and Matthew embody the doctrine of God’s Fatherhood, Anne of Green Gables also reflects Montgomery’s discomfort with doctrine. Anne can recite catechisms about God ‘promptly and glibly’ but desires a spirituality mediated by nature and beauty, such as silent prayer in ‘a great big field all alone’.[18] When Marilla sends her to retrieve a copy of the Lord’s Prayer, Anne is distracted by a picture: Christ Blessing the Little Children.[19] As John Sorfleet points out, it is after this that she learns the Lord’s Prayer: ‘in doctrinal terms, she comes to the Father through the Son’.[20] Despite Montgomery’s disavowal of belief in crucial aspects of the Trinity, images of a loving communion with God the Father and Christ the Son recur throughout this book, mediated by natural beauty and human love.

Decades after Montgomery, another writer engages with the doctrine of the Fatherhood of God on very different terms.

Dorothy L Sayers was born in 1893 in Oxfordshire, England, twenty years and a continent away from L M Montgomery. She too was raised in the church: her father was a minister. Sayers was uncomfortable with religious sentimentality as she grew up, but fell in love with the triumphant, poetic view of doctrine 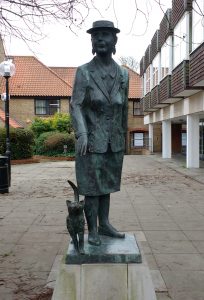 in G K Chesterton’s Orthodoxy.[21] In a letter, she explains that she is ‘quite incapable of religious emotion’ and can only approach God through the ‘intellect’ or by being ‘in love with the dogmatic pattern’. However, she continues, the intellect channels other emotions, so that ‘The “passionate intellect” is really passionate’. Sayers loved engaging with doctrine in her art, though hated how its success labeled her as a ‘writer of Christian Apologetics’.[22]

One distinction is important here: Montgomery was also uncomfortable with mawkish religious expression. While Montgomery and Sayers were both zealous in their loves and hates, both disliked the melodramatic.[23]

Sayers’s intellectual passion is present in all her writings, including ‘The Emperor Constantine’.

In 1951, Sayers was commissioned to write a play, ‘The Emperor Constantine’, for the Colchester Festival.[24] She used this commission to explore the theological debate at the Nicene Council, in which she was already interested, and reignite the sleeping fire of the Nicene Creed.[25]

From the beginning of the play, fatherhood is in question. Constantine discovers that in the eyes of the Church, he is his parents’ only legitimate son. He comments: ‘I owe Christ something. Is He a strong god?’[26] This question establishes the theme of fatherhood and sonship as well as Constantine’s desire to use Christian doctrines as tools for self-advancement. In his rise to power, Constantine continues to use Christianity and the cross for personal gain. For example, he strives for Church unity to consolidate his political power.

The key scene of the play is the debate in the Nicene Council, in which orthodox church leaders, including Athanasius, challenge the Arian heresy. As Sayers herself explained, ‘Arians, in their anxiety to maintain the Son’s distinct personality, were asserting that He was a created being . . . [which] would have overthrown the very nature of Christianity, since, if Christ is a creature it would be idolatry to worship him’.[27]

In brief summary, Arius and his party declare that Christ was created, and is therefore divine, but not equal with the Father. They support their argument with Scripture verses like ‘My Father is greater than I’[28] and linguistic nuances in New Testament Greek.[29] Sayers dramatises this complicated grammatical and exegetical argument by giving Arius and other council members personalities: Arius is manipulative, sarcastic, and insulting; Athanasius, his opponent, is zealously articulate in defending orthodoxy. Athanasius wins the debate, and the Council composes the Nicene Creed to deny the Arian heresy, writing that Jesus Christ is the ‘Son of God, sole-begotten of the Father’s substance, God out of God, Light out of Light’, ‘begotten not made’.[30]

Despite the length and complexity of the debate, Sayers said later that the scene proved to be ‘the “best theatre”’ in the whole play, ‘particularly liked by that “common man” element in the audience which knew nothing about theology’.[31]

After this triumph in the play, however, a conflict contrasts the perfection of the Father God with human fathers. Constantine is tricked into ordering the death of his innocent son.[32] When Constantine realises his mistake, his betrayal as a father almost drives him mad: ‘I had a son, like God, and like God’s Son he was innocent, and I killed him’. He repents and is later baptised, declaring Christ as ‘King and God’ and worshipping ‘Father, Son, and Holy Ghost, consubstantial and undivided Trinity’.[33]

Margaret Weidemann Hunt identifies this baptism as one of the sacramental events that Sayers put in all her plays, showing how ‘creativity and the arts mediated the divine’.[34] In this way, Sayers has illustrated onstage the doctrine of God the Father: almighty and merciful, co-equal with the Son.

Montgomery resisted doctrine and chose the way of whimsical unorthodoxy: a spirituality of beauty, relational love, and intimacy with the divine in nature rather than in the Church. However, the dogma-defined nature of God as all-powerful and loving Father permeates Anne of Green Gables through creation and through Matthew.

In contrast, Sayers took the way of passionate orthodoxy and reenchanted dogma as a living agent of truth. Though she opposed the use of art to provoke an emotional reaction, she was genuinely excited by the drama of the creeds and wanted others to experience it, too.[35] ‘The Emperor Constantine’ also embodies the doctrine of God as all-powerful and loving Father by dramatising the debate about the Godhood of the Son and contrasting the Father’s perfect love with Constantine’s tragic betrayal.

The success of Montgomery’s and Sayers’s work lies in their ability to convey their genuine love for aspects of theology with excellent craftsmanship. Instead of trying to disguise sermons as stories with clumsy or nonsensical plots, stereotypical characters, and dialogue oversaturated with moralistic statements, Montgomery and Sayers incarnated doctrine in worlds of intricate detail, multi-layered relationships, and believable characters with desires and flaws. Their work demonstrates how artists can engage with doctrine: not in self-righteous and clumsily-crafted work, but in genuine love of the subject, superb craftsmanship, and an appreciation for complexity, uncertainty, and suffering.

In summary, both artists engage with the doctrine of God the Father in a faint, imperfect echo of how Jesus Christ revealed him to the world by entering it in flesh and blood, initiating loving human relationships, and teaching wisdom through sermons, stories, and actions. In other words, they conveyed doctrine incarnationally.