Editor’s Note: In this post, Elizabeth Noyes reflects upon a show that she curated for St James Cathedral in Seattle, WA.  The show was held from January to February 2012.

The Director of Music, James Savage, and Director of Liturgy, Corinna Laughlin, asked me to curate an exhibit that would accompany a pre-Lenten concert, “Prophets”, to be performed by Pacific Music Works at St. James Cathedral in Seattle, WA.  We discussed several possibilities: one was a “Hall of Prophets”, paintings of identical dimensions, pictorial columns, artists choosing a prophet from a list we’d provide.  Even though we began planning six months ahead, we realized some artists would be unable to ‘create a prophet‘ in that time, might even not want to paint a prophet to our dimensions. We had also to take economic considerations, dimensions to fit the space and, it emerged, the relationship the work would have to a Renaissance altarpiece by Neri di Bicci, a 14th century ‘conversazione’, the jewel in the chapel.  We found ourselves wanting to select work we could imagine would be in ‘sacra conversazione’ with the altarpiece.  We drew up a short list of artists who had images on their websites that we liked, and who we thought might be willing to show.  Five accepted – just the right number.  As we viewed their work, we realized that each artist was an artist-prophet in his or her own right, that his or her ‘style’ was an authentic and contemporary prophetic image in the long line of prophetic images painted by artists for the Church.  We began thinking about amplifying the meaning of ‘many tongues’, the miracle of the Holy Spirit’s presence at Pentecost, to embrace an artist’s style and form of expression as possible authentic and contemporary expressions of the Holy Spirit, affirming diversity unified by Spirit.

We re-named the show “The Spirit of Prophecy”.

Our next concern was to give our diverse parishioners an explanation of what we were trying to do: that as well as the show accompanying thematically the concert, it was also attempting to present image making as a language with ‘many tongues’ or modes, figurative, surreal or abstract. 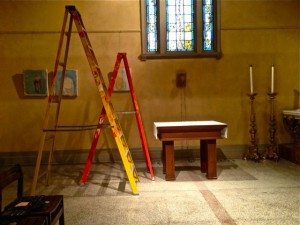 We spent hours hanging the show.  The installation was a practice that engaged the installers in responding personally to the work and in having conversations with each other about the work.  We learned that it is not always a good idea to have artists present at installations.

All the artists were delighted to show in a church.  Not all were Christian.  Two created work especially for the show.  One said the show had transformed her life as an artist.

We did not offer work for sale and asked for no commission on sales, providing only contact information for the artists on our website.  We paid for shipping for returning work of out of town artists. We published a simple catalogue through Blurb to witness to the experience of our art-music event.

We held an opening reception on one of the concert nights where parishioners and others could meet and talk with the artists.  The Director of Liturgy gave a ten minute ‘tour’ after Sunday masses for the month the show was up and responded to questions and criticisms (one coming to mind was that a certain piece was not “holy enough and should not be in the Chapel”, a judgment full of possibilities for a long discussion.)

IMAGE Journal’s editor Greg Wolfe encouraged IMAGE to host a reception on closing night in the Chapel to underline the Cathedral’s place in the cultural history of Seattle and to strengthen the ties between the Journal and the Cathedral.

What we learned from this experience was to ‘dance’ with whatever was actually happening in the process of putting the show together, to welcome the surprises and the unexpected.  Once we had our non-negotiable limits lined up, economics, dimensions, dates, themes, we could improvise and let happen what was trying to happen – a lesson in collaboration with the Holy Spirit.

Elizabeth W. Noyes is a Catholic painter-poet living in the Pacific Northwest of the U.S.  She received her MFA from George Mason University, Virginia in 1988 then came West where she worked with the Catholic Peace Movement Pax Christi, with a ministry for homeless Native Americans and on environmental issues whilst she studied Benedictine spirituality with the sisters of St. Placid Priory. In 2010 she left a gallery partnership and is currently working on a hand-crafted artist-book memoir, “Learning from Trencadis”.

Images belong to the author.