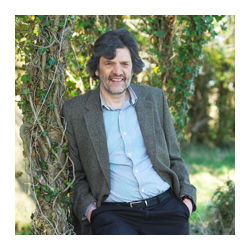 Much poetry, we frequently tell ourselves, should ideally be heard as oracular performance. “We” tend to be academically-bent university types who might be the guiltiest of appropriating poetry for vivisection. If anyone is worse at letting poetry live as poesis—vibrant artistic expression sufficient unto itself—it might only be those faux-Platonists with the negative construct that poetry is dangerous.

It was therefore an immense privilege for ITIA to again host Michael O’Siadhail and hear him read his own poetry as works of art. O’Siadhail is a poet who mid-career put down his day job as a scholar of philology and literature to concentrate on original poetry, and our privileged hearing in Parliament Hall was a reminder that, while art merits intense critical study, it is ultimately something that must be done and contemplated.

Never having been exposed to O’Siadhail’s poetry, I went with the deliberate strategy that I would take the brunt of the experience in all its visceral freshness. As with any aesthetic experience, there was the ingrained academic temptation to pre-emptively scrounge through O’Siadhail’s bio, read his publications, build a fortified opinion, and come to the reading with a prepared perspective on what I would hear and how I would think about it. Academically this is responsible. Insinuations of negligence notwithstanding, I was most glad to be burnished in the beauty of the poetry at first encounter.

This being a theological setting in an academic context, there was never much chance this event would be a pure reading bereft of dialogue, but O’Siadhail held the interlocution between his own reflections on his poetry and his poetry itself. The result was a generous gift of experiencing the poet as much as the poetry. This poet has no small gift for holding an audience, and his 90 minutes of reading and reflection never once induced the temptation to look at the progress bar and see how much time had passed. No opportunity was made for questions, so the performance stood as just that rather than lapsing at the end into academic banter.

In my chosen discipline of poetry and drama, we agonize endlessly about The Poetic Voice. O’Siadhail’s performance was an occasion to hear a first-rate poet in his own voice and to know we were hearing the poetry without question of how it was meant to be heard. He commented between readings that a live performance is always a singularity never to be duplicated, and this dimension is what makes the art alive. O’Siadhail looks and sounds every bit the Irish poet; his voice and physical expression are an integral part of what it is to truly experience his poetry. The deep stillness of his reading, what Lord Peter Whimsey—in a poem—calls the tension at the verberant core of music,[1] was on this evening felt and seen in ways that cannot come from books.

Actors inhabit their characters so that we experience their expression of the part they play. Performers are not bifurcated from their characters, but there is some veil between. The poetic voice as flaunted by poets such as Milton is high art but also gamesmanship. O’Siadhail’s voice, like he himself, is by comparison wondrous for its vulnerability, and this is perhaps what was most moving about his performance. To steal from Twain: Words are only painted fire, a look is the fire itself. O’Siadhail gave us that look, and we shall carry it away to the treasury of heaven, where all things that are divine belong.[2]

Micah Snell is a PhD student in the Institute for Theology, Imagination and the Arts.  He is researching the theological merits of Shakespeare’s late plays and his attention to the role of the theatre in Jacobean society.