Editor’s Note:  This article is the first in a series by Naomi Billingsley, who will be writing on reflections on art at Chichester Cathedral.

Chichester Cathedral is famed for its modern art – especially the prominent commissions of the artists Graham Sutherland, John Piper and Marc Chagall by Walter Hussey during his time as Dean (1955-1977). It is also home to some fine works of art from earlier periods, and there have been a number of important acquisitions since Hussey’s time as Dean.

As part of my work as Bishop Otter Scholar for Theology and the Arts in the Diocese of Chichester, I have been researching the art in the Cathedral, and leading a series of discussion groups through which I have gathered some contemporary responses to the works. This research will feed into new content I am creating about the art in the Cathedral. I will also be drawing on this experience to write a resource for use in parishes across the Diocese to use to engage with art as a source for reflection.

In this series of posts, I will be sharing some of this research: each post will include some information about the work(s) in focus, and extracts from the group discussions I hosted. For this instalment as well as those to follow, I would be delighted to hear in the comments from anyone who would like to add their own responses to works I write about in the series—whether from your own previous knowledge of Chichester’s art, or prompted by reading the posts.

Among the oldest treasures in the Cathedral are two reliefs, thought to date from the thirteenth century, depicting scenes from the Lazarus narrative in John’s Gospel: Martha and Mary going to meet Jesus (John 11:30-32) and the raising of Lazarus (John 11:33-44). 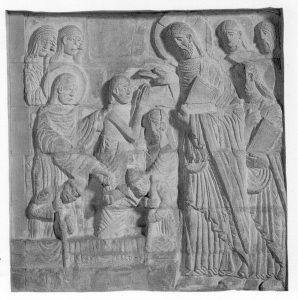 These are rare examples of Romanesque sculpture in Britain, and a remarkable survival. Resonating wonderfully with their subject matter, the reliefs were hidden for centuries, and rediscovered behind the choir stalls in 1829. Other fragments of carvings were discovered along with the reliefs, and it is thought that they formed part of a larger scheme in a chancel screen. When rediscovered, the reliefs were moved to their present location in the south aisle, which saved them from another risk – the collapse of the Cathedral spire (into the quire, where the reliefs were found) in 1861.

One of the most striking features of the carvings is the emotional intensity in the faces of the figures, and this was the first thing that was commented on during the discussion session about the reliefs; as one participant put it simply: ‘they look so sad’. Jesus’ face in the raising of Lazarus is particularly powerful – a very striking rendering of the shortest verse in the Bible, John 11:35, usually rendered ‘Jesus wept’. 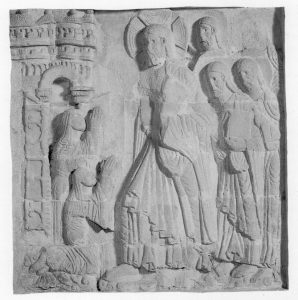 There is a wonderful drawing of the face of Jesus by John Piper in the collection at Pallant House Gallery in Chichester, where Dean Hussey bequeathed his personal art collection (further links between the Cathedral and the gallery will be mentioned in future posts). Piper is one of many artists inspired by the reliefs; another is Eric Gill, who grew up in Chichester, and enthused about the reliefs: he borrows the composition of the sisters meeting Jesus for Jesus meeting the daughters of Jerusalem in his Stations of the Cross at Westminster Cathedral.

Part of the appeal of the reliefs lies, as one participant highlighted, in the very human presentation of Jesus here. According to the contemporary custom, we are left in no doubt that Jesus is the most important figure in the reliefs by his exaggerated height. But at the same time, this is a figure who has friendships and emotions, and whose grief-stricken face inspires empathy from viewers many centuries after it was carved.

Indeed, for me, the fact that the reliefs were carved many centuries ago heightens their impact – partly because their very survival is so remarkable, but more so because their emotional immediacy speaks across the centuries.

And because most of the ‘facts’ about these carvings are lost in the mists of time, the viewer is liberated from becoming bogged down in analysing details such as the artists’ intentions and instead is given, as one participant put it ‘a blank page’, inviting ‘an immediate, emotional reaction… [rather] than something which is more intellectual.’

On the other hand, Linda Brown highlighted in one of our discussions session that we can also view the reliefs as giving us an insight into thirteenth-century perceptions of the Lazarus narrative, and, in the architectural features in the sisters meeting Jesus, impressions of the Holy Land in this period. This thought prompted a discussion about travel and pilgrimage in this period, and in turn prompted me to wonder if we might view these works like the mediaeval church labyrinths that allowed the faithful to make a surrogate pilgrimage. Perhaps the thirteenth-century viewer of the reliefs (or indeed the twenty-first century one) could (and can) imagine themselves standing at the gateway and the graveside in Bethany, with Jesus, Martha and Mary, and sharing in their anguish.