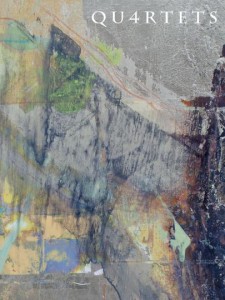 This catalogue was published to coincide with the touring exhibition “QU4RTETS–art and music reflecting on T.S. Eliot’s Four Quartets.” The catalogue includes a “Foreword” from Gregory Wolfe, an “Introduction” from Bruce Herman, an “Artist’s Statement” from Fujimura and another from Herman, a “Composer’s Statement” from Theofanidis, and essays from Matthew Milliner, James McCullough, and Jeremy Begbie.

The “Exhibition” section is filled with full bleed details as well as excerpts from Eliot, a sort of exercise in slowing down. I especially like that these details precede the later fold outs, and that they alternate between Fujimura and Herman. It’s not until pp. 24-25 that we encounter the eight paintings together (four from Fujimura and four from Herman), and even here, they’re interspersed, Herman over Fujimura, then Fujimura over Herman on p. 24, a sequence repeated on p. 25. Then, in “Artists” we get the “Artist’s Statement,” and tucked behind, a wonderful surprise: a double fold out yielding a four-page spread, with one piece on each page, spot varnishes lifting the pieces off the page. 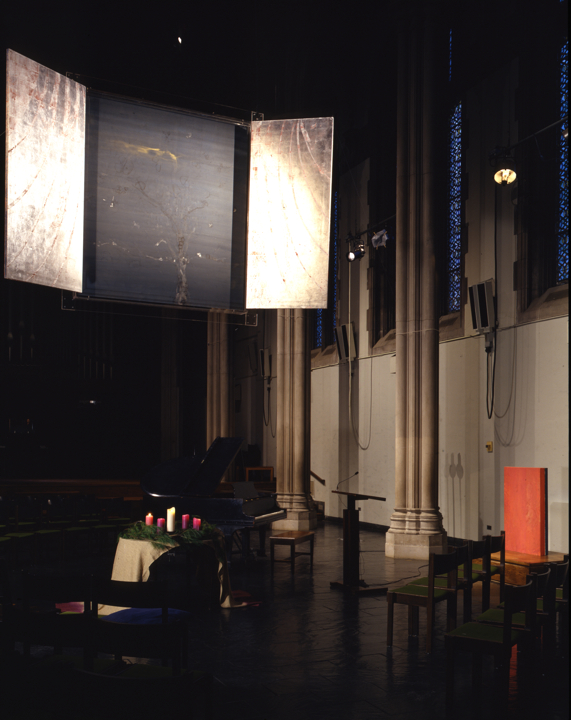 I couldn’t help but think of the Rothko Chapel paintings upon seeing Fujimura’s QU4RTETS I-IV, but one might also think of Fujimura’s triptych Gethsemane Altarpiece (St. James Chapel, Union Theological Seminary, 1999, at right). Dark and brooding, QU4RTETS I is completely black, or so it appears in the catalogue. QU4RTETS II suggests the dawn, or perhaps an in-breaking along the lines of Alfonse Borysewicz’s Lumens 51, the sun rising along the edges in gold leaf. If QU4RTETS I is the night and QU4RTETS II the dawn, then QU4RTETS III is the day and QU4RTETS IV dusk. Or, perhaps more appropriate in dialogue with Eliot: winter, spring, summer and fall. Four smaller ancillary works follow, “offered as visual quiet; as silent meditation” (p. 30).

Herman continues the seasonal theme (see here), “an old painterly tradition: the Four Seasons and Four Stages of life,” as well as “the Four Elements” (p. 35). That said, he’s explicitly “point[ing] toward the mysterious ‘fifth element'” (p. 35). Herman’s figures figure prominently, but don’t dominate the field, and so perhaps the mystery is realized in this space. His figures seem innocent, though not naive. The curiosity of youth weathers, becoming the wisdom of age, but not before passing through both fire and water. Four smaller ancillary works follow here too, and these from Herman’s Presence/Absence.

Watch a video of Herman working on one of the QU4RTETS panels here.

Theofanidis’s “Composer’s Statement” and selections from the score follow Fujimura and Herman, and though I was obviously unable to hear the music, the hand-written musical notes have their own sort of presence on the page, a paradox perhaps: music seen, but not heard, present, but notably absent.

The essays comprise the second half of the catalogue, and in the first essay, Milliner, Assistant Professor of Art at Wheaton College, begins with Asher Durand’s Kindred Spirits, drawing parallels to Herman’s work and noting: “The paintings of Bruce Herman featured in this exhibition return to the underestimated kinship between poetry, painting and piety at the core of the American tradition” (p. 46). He goes on to tell Herman’s story in five parts: “Philip Guston and Bruce Herman,” “Looking Eastward,” “Art After Christianity,” “Conflict of Imagery,” and “Four Quartets.” In the first part, Milliner points out that both Guston and Herman were influenced by Eliot, but whereas “Guston offered us ‘abandoned Edens,’ Herman offers the New Eve” (p. 48). In the second part, Milliner briefly traces Eliot’s pilgrimage from Unitarianism to Hinduism and Buddhism before converting to Anglicanism, and Herman’s journey from Episcopalianism to Eastern thought, and then back to Christianity. Parts three and four explore conversations of Christ and culture, and the fifth part explores the twin tensions of figuration/abstraction and explicit/implicit faith in Herman’s work, tensions Milliner argues that Herman overcomes in his QU4RTETS.

Turning to Fujimura, McCullough’s “Crises and Resolutions: T.S. Eliot and Makoto Fujimura” begins with Fujimura’s “Backgrounds and Influences,” and though Fujimura himself has written much along these lines (e.g., River Grace), McCullough’s essay provides additional context. In the section that follows, “The Present Work,” McCullough focuses on process, turning his attention to “possibilities of meaning” (p. 65) in “Aesthesis and Ascesis.”

In the catalogue’s final essay, Begbie, Thomas A. Langford Research Professor of Theology at Duke Divinity School, offers a meditation on music, time, and the Incarnation. Leaving his initial “sketch, bordering on caricature” (p. 72) behind, Begbie appropriates Rowan Williams’ reading, noting: “I believe Williams opens up not only a more convincing reading of the text’s treatment of time, but also, through that, a far more fertile account of what it might mean to read the text musically, and to hear music – not least Theofanidis’ music – ‘through’ the text” (p. 75). Concluding, Begbie argues that “change and order can go together … change need not imply chaos” (p. 77). Moreover, he suggests that we “give ourselves to music …. The enrichment music offers comes through a process we do not and cannot control” (p. 78).

A lovely catalogue, a real treat.  A balance of image and word not often achieved. Regarding improvement, it would have been nice to have a CD of Theofanidis’ “At the Still Point.”

Watch a video from Duke Chapel here (the music, with Jeremy Begbie performing, begins at 1:04:48).

Ending on a positive note, the catalogue provides something of an example for artists who are Christian: parallels instead of illustrations. This speaks to my own work, Gospel through Shared Experience, an alternative to Art that Tells the Story, a project in which both Fujimura and Herman participated. The former (i.e., the QU4RTETS catalogue) would be what John Walford describes as “human experience viewed through an informing faith lens,” the latter  (i.e., Art that Tells the Story) “the Bible as a source of narrative.” Both have their place, but I would certainly welcome more of the former, and in this regard QU4RTETS is exemplary.