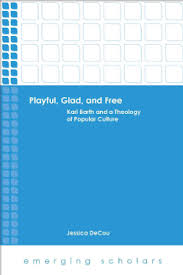 For those questioning whether or not Karl Barth even had a theology of culture, Jessica DeCou’s well-written text brings the voice of Barth to bear on the ever-growing field of theology and popular culture studies.  DeCou’s work is portioned out in two main parts.  First, she spends the initial chapters setting the theological stage by exploring two different approaches most often taken by Barth scholars (7). Serving as a corrective for those who champion Barth’s theology of culture as an “extension of his doctrine of the Word” or “true words approach,” DeCou suggests an “abandonment” of the latter in “favor of a model guided by Barth’s writings on culture and the Spirit in the context of his eschatology” (7).

Secondly, DeCou constructively underscores and tests Barth’s criteria for a theology of popular culture by providing a wide range of television examples spanning from The Late Late Show with Craig Ferguson to comedies such as Parks and Recreation in order to analyze “what makes a theological analysis of popular culture objective, valuable, human, reflective, and properly limited” (179). In the process of re-situating or “adapting and expanding Barth’s discussion of art and humor,” DeCou finds it necessary to distinguish between the arts (“entertainment”) and artistic forms more generally (155).  In no way is she claiming to perpetuate prejudices between high and low culture; rather, she is intent on ensuring the ability of popular culture to serve a specific task:

To contribute (1) to play, through its creative affirmations of human freedom and hope, (2) to fellowship, by strengthening our sense of community and fellow-humanity and contributing to our collective memory, and (3) to the relaxation of present anxiety in anticipation of the final future release. (155)

DeCou’s determination to wrestle Barth away from those who tend to depict him as an anti-culture theologian brings a number of strengths to the forefront.  First, of course not completely absent in contemporary dogmatics, but nonetheless significantly lacking, is DeCou’s willingness to draw metaphors such as play, gladness, freedom, joy, and happiness back into the theological conversation (6).  Second, her treatment of Barth’s contention with Friedrich Schleiermacher is extremely helpful for those interested in Barth’s thoughts on culture in relation to theology, especially regarding Barth’s strong push against what he observed as the “conflation” of pneumatology and anthropology in Schleiermacher’s theology (31). DeCou also draws attention to Barth’s “very real skepticism…toward the possibility of a theology of culture that could avoid the deification of human achievements”(6). Regarding Barth’s place within the theology of culture debate, DeCou writes:

His intention in writing against Schleiermacher, Tillich, and others “was by no means an attack on culture as such, but rather the opposite, upon a bogus mystification of culture which required to be disenchanted of its secret divinity before it really could be human culture.” (146)

Third, DeCou is absolutely correct in placing the imagination as “central to understanding the beginning as well as to understanding the eschatological future” (123).  Here, she creatively discusses the imagination in relation to hermeneutics and Barth’s pneumatological eschatology while placing it in dialogue with Timothy Gorringe’s work on Barth (123). Finally, yet far from exhaustively, DeCou reiterates what she understands as the “inherent theological significance” of popular culture’s task (to play, fellowship, and relax), which naturally raises some questions concerning potential challenges for theological interpretation of popular art (155).

DeCou criticizes correlational approaches to culture such as those of Tillich, Cobb, Lynch, and Deacy, as well as others, for violating the integrity of culture, not by a lack of attention, but by utilizing culture for theological gain.  She argues that such models “approach popular culture in terms of its utility for theology and misunderstands culture’s value and purpose” (186).

Following Barth, DeCou clearly excludes popular culture “as a source of divine revelation or an opportunity for encounter with the unconditioned” (179). This should serve as no surprise from what we know of Barth, and in turn makes the reader wonder if this is one more attempt to “properly limit” possibilities for theological construction by raising a sturdier, more robust divide between the sacred and secular.

Most would agree that the hermeneutical posture of listening is vital for understanding. But does that listening entail a judgment that all theological considerations of cultural texts remain “secondary to their innate value” (186)? Establishing separate spaces for the purity of theological construction undermines any effort toward a theological hermeneutic that takes popular culture seriously in the interpretive process.

DeCou’s own distinction between certain popular arts and art more generally may in the long run only exacerbate the tendency within theology to marginalize popular cultural artifacts from theological construction. Such practice is too often disguised as a noble effort to relieve culture of the unsought “burden” and improper “responsibility” to offer even a degree of substantive theological insight (6). This seems just another way of telling philosophers, artists and the lay person: you cannot do theology “properly.” By limiting culture to a sphere of play, fellowship, and relaxation, a significant range of the human experience of God seems to be bracketed out from possibilities proper to the imagination that DeCou wants to endorse; as such, it seems an uncharacteristic approach for a work seeking to emphasize the Spirit and eschatology.

DeCou’s work is strongly recommended for instructors and students working in interdisciplinary research, as well as students in more specific areas of study such as Barth’s theology or theology and popular culture. DeCou is a good theologian and an entertaining cultural critic, and I will be adding DeCou’s work for discussion in future courses in theology and culture.