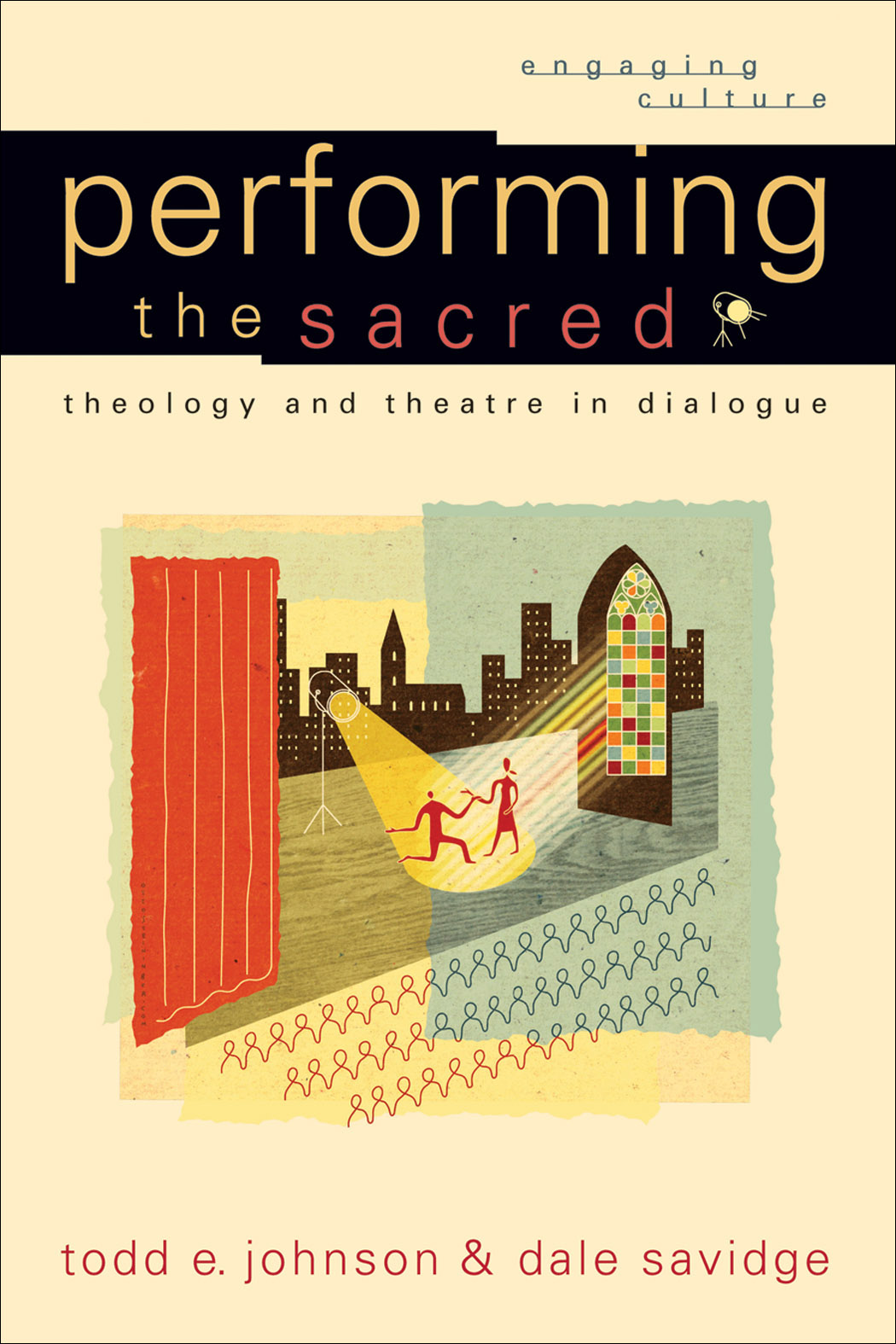 Looking for links and analogies between a particular artistic medium and theology can be greatly rewarding.  It can be difficult, however, to know how to begin the investigation.  Over the past ten years, Baker Academic publishing house has attempted to provide just such a starting place with their Engaging Culture series which ‘explores particular cultural expressions, seeking to discover God’s presence in the world and to involve readers in sympathetic dialogue and active discipleship.’  Theatre is the cultural expression explored in the sixth book in the series, Performing the Sacred: Theology and Theatre in Dialogue.  In it, authors and friends Todd E. Johnson and Dale Savidge set out to fulfill the promise of the book’s subtitle.  Johnson is a professor of Worship, Theology and the Arts at Fuller Seminary, and Savidge is a professor of theatre at North Greenville University and Executive Director of the organization Christians in Theatre Arts (CITA).  [In the spirit of full disclosure, I am an active member of CITA.]

Theology is often likened to a millennia long, ongoing conversation.  For much of church history, however, theologians interested in the theatre would not find themselves welcomed into that conversation.  These two authors, who share a love of—and academic training in—both theology and theatre thoughtfully and systematically communicate their belief that ‘theology can be understood through the lens of theatre and that theatre can be understood through the lens of theology’ (11). Appropriately, the book has a dialogical feel with each author taking on chapters that best align with their background: theatre for Savidge and theology for Johnson.  Apparently this is more than a clever organizational convention because, according to them, the book is a formalized and expanded version of conversations shared by the two of them over the course of several years.  The main thrust of their argument is that the theatre embodies key aspects of the Christian faith: incarnation, community, and presence.  Similar to the way actors inhabit the words of a script through speech and movement, Christ, the eternal Word, took on flesh and became the Word incarnate.  The audience and actors, at least for the duration of the play, form a type of community, a truth that points to the communal nature of the Trinity.  And, because theatre is traditionally understood to be a live performance, the audience and actors are present to one another in a way which echoes God’s presence in the world.

The book raises questions which really spark a reader to think.  As I was reading it for this review, I found myself writing out sometimes lengthy responses to questions the authors posed.  For example, ‘If theatre uniquely embodies central qualities of God and the life of faith, why is it losing out to other art forms?’ (88) Some might find the book disappointing in the sense that it doesn’t go deeply enough into any of the areas it addresses.  I would counter that such is not the intent of the book.  The authors are interested in generating or furthering discussion about theatre and theology; space does not allow them to present an exhaustive analysis of the issues they engage.  However, because the book is well-researched, its bibliography is a goldmine for those wishing to delve even more deeply.  Another strength is the willingness of Savidge and Johnson to be concrete.  They name particular examples of works of theatre throughout the book in an attempt to directly apply their more theoretical theological conclusions.

There were times when I took issue with broad statements made in the book (i.e. ‘Theatre. . .slows down life.  It isn’t a loud assault on the senses’ (15). Most of the time, however, such statements made sense in context.  On the whole, I found the book to be a clear and helpful introduction to a growing field.  The teaching spirit of Johnson and Savidge comes through in the pace and tone of this book: when relevant, Greek roots of words are given and defined, chapter themes unfold systematically, and key concepts are introduced and explained.  There is also a pastoral quality present, particularly from Savidge.  In a chapter entitled ‘The Christian at Work’, Savidge writes about some of the struggles Christian playwrights and actors face (for example, questions of discernment about what to write or perform) and offers encouragement that Christian theatre artists should take heart knowing that God is with them.  To actors he writes, ‘The believer called to pursue the art and vocation of acting will do so in God’s shadow and with immediate access to God through prayer.  No challenge or choice will ever be entered into alone’ (115). But he follows that up with a call for clear discernment, ‘Don’t be ashamed of or shrink away from drawing lines based on your understanding of Scripture, the counsel of other believers, and your conscience.’

Again, the book is not nor can it be all things to all people looking at the intersection of theatre and theology, but for anyone interested in listening in to the ongoing conversation between theologians and theatre artists, this is a good place to start.

Dave Reinhardt is a PhD Candidate at the Institute for Theology, Imagination, and the Arts at the University of St Andrews, researching in the area of theology and theatre.