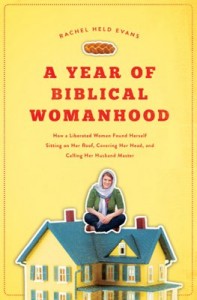 In his review of Rachel Held Evans’ recent and somewhat controversial book, A Year of Biblical Womanhood: How a Liberated Woman Found Herself Sitting on her Roof, Covering Her Head, and Calling Her Husband Master (Thomas Nelson, 2012), Richard Beck identified Rachel’s project—a year spent following certain aspects of the Bible’s teaching concerning women as literally as possible—to be “hermeneutical performance art.”

Beck proposes that what Rachel achieves by the project is a criticism of what she identifies as a “pick and choose” mentality. She finds this mentality in complimentarians who approach the Scripture to favour their own theological position. By engaging in her own picking and choosing in a public, lived-out way, Rachel’s hyperbole suggests the underlying problem with the pick-and-choose model as a whole.

Rachel stands “at the city gate” with a poster praising her husband—a reference to Proverbs 31. She observes Levitical purity laws for a month during her period and does not touch any man, let alone her husband, for the week. (She sleeps in a tent so as not to defile any of the linens in her home.) Among other displays, these brought Rachel controversy. But her year of Biblical womanhood wasn’t only about hyperbolic examples of Biblical literalism. Rachel serves as a Compassion blogger in Bolivia to champion the rights of women and children. She reaches out to Jewish and Christian theologians to better understand the context the Scripture was written in. She interweaves her book with deeply spiritual reflection, indicative that the tongue-in-cheek spectacle was, at its core, an exercise in faith. By the close, Rachel concludes that she loves the complexity and mystery of God and His Scripture more than when she began.

At its heart, this is the performance art element of Rachel’s hermeneutics. What she identifies as ridiculous is not easily seen through a blog post—it is best experienced, then reflected upon.

The issue of the performative quality of Rachel’s project has been suspected as much as her exegetical leanings. Matthew Lee Anderson’s review of the book, which goes on to offer a cogent criticism of exegetical problems he finds in Rachel’s work, nonetheless begins, “I’ve spent the past week trying to figure out what it means, culturally, that we’ve reached the point where we’re paying people to spend a year doing what amounts to performance art, so that they can write about our normal lives.”

Regardless of the position a reader takes concerning Rachel’s conclusions about mutuality in the kingdom of God, at interest for a discussion of theology and the arts is the question of whether or not hermeneutics can, in fact, be performed.

Liturgical traditions aside, what of projects like Rachel’s, where the author, or in general terms, the artist, is paid to actively engage in hyperbolic expressions in order to make a theological point?

One misgiving of Rachel’s project is that it appears to be an exercise in satire. Having read the book myself, I suggest that what she describes and executes is a form of hyperbole.

Hyperbole, classically defined, is an exaggeration in service of the truth.

Satire, however, seeks to deliberately ridicule in order to make a point.

What harsher critics of Rachel’s work did not consider was that she was engaging the Scripture, not them, with hyperbole. The line is blurred, of course, when the group in question believe they have the right interpretation of the Bible.

But Rachel’s point was to apply hyperbole to the Scripture to expose resultant problems in every hermeneutical direction.

In this way, her performative hermeneutics provide the means for a serious discussion within every Christian community about how we read and approach the Scripture.

The question for the Church and her artists remains: is this sort of project only wrong when it offends our sensibilities and only right when it does not?