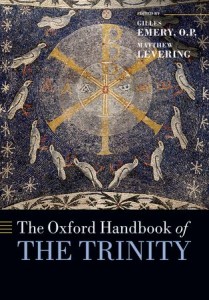 Editor’s Note: Over the course of the next week, we will be posting five review clusters addressing selections from The Oxford Handbook series having to do with art, aesthetics and related themes.

In this Handbook, Emery and Levering are seeking to bear “witness to the enquiry that characterizes contemporary Trinitarian thought.”[p. 1] The Handbook includes forty-three chapters grouped into seven post-Introduction parts: 1) The Trinity in Scripture, 2) Patristic Witnesses to the Trinitarian Faith, 3) Medieval Appropriations of the Trinitarian Faith, 4) The Reformation to the Twentieth Century, 5) Trinitarian Dogmatics, 6) The Trinity and Christian Life, and 7) Dialogues. As it would be impossible to engage each and every chapter or part here, I have chosen one chapter from the book’s sixth part for special consideration; namely, Chapter 34: “The Trinity in Christian Visual Arts” by François Bœspflug, O.P.

The “History of the Trinity in Art” comprises the bulk of the chapter and is divided into five  periods: 1) aniconism (Christ to the middle of the third century), 2) iconic (third to the eighth century), 3) exploratory (ninth to the twelfth century), 4) flowering (thirteenth to the fifteenth century), and 5) diffusion and decline (sixteenth to the twenty-first century).[pp. 475-483]

In the second period, Trinitarian images included the hospitality of Abraham, the baptism of Christ as well as non-figurative symbols and signs (e.g., the triangle). In the third period, “five main families of images of the Trinity came to birth.”[p. 478] These include the “Throne of grace,” the “Psalter Trinity,” the “Paternity,” the “Triadic Trinity,” and finally, tricephalous depictions.  In the fourth period, there were additional, new images: “three types of suffering Trinity (the Double Intercession, the Mystical Winepress, and the Compassion of the Father), and a theme of glory, that of the Coronation of the Virgin by the Trinity.”[p. 481] “The only creation of” the fifth period “is the image called the ‘two Trinities’, the earthly and the heavenly.”[p. 482]

The chapter ends with a theological appraisal that addresses regulation, reception, and usage. Most interesting is the final paragraph in which Bœspflug notes: “if each century can reuse the images of earlier times, no one is dispensed from having to reinvent the response of faith to the proclamation of the Gospel, in the language of contemporary images.”[p.484]

Positively, the historical overview was most helpful, particularly the previously mentioned types of images that Bœspflug discusses. Negatively, while mentioning the need “to reinvent the responses of faith,” Bœspflug considers no such reinventions here. Strangely absent from the bibliography is David Brown’s contribution to The Trinity: An Interdisciplinary Symposium on the Trinity (Oxford: Oxford University Press, 1999), “The Trinity in Art.” That said, Brown’s earlier work on the Trinity is discussed elsewhere in this volume.[pp.340-342] A necessary resource. 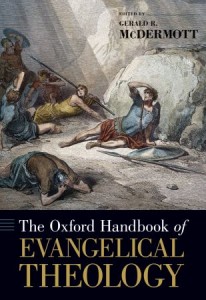 In this Handbook, McDermott sets out to “discuss the meaning of the word ‘evangelical’ and outline evangelical theology’s basic assumptions, while distinguishing it from other kinds of Christian theology.”[p. 5] The Handbook includes thirty-two chapters grouped into six post-Introduction parts: 1) The Bible and Theological Method, 2) Theological Foundations, 3) Theology of Salvation, 4) Theology of Church, 5) Theology of Mission, and 6) Theological Approaches to Contemporary Life. As it would be impossible to engage each and every chapter or part here, I have, here again, chosen one chapter from the book’s sixth part for special consideration; namely, Chapter 27: “The Arts” by Roger Lundin.

Lundin begins with history, noting first “that the story of evangelical engagement with the arts has largely been one of action and adaptation rather than one of theory and reflection.”[p. 418] Second, he notes “that evangelical Christianity and the contemporary arts are fluid realities rather than fixed entities … [with] common roots that reach back to the Protestant Reformation.”[p. 418] Likening disagreements between the two to “a family drama, with evangelicalism and the arts cast as siblings arguing over the family inheritance,”[p. 419] Lundin goes on to discuss evangelicalism and Romanticism. “These two movements,” he argues, “drew from the same Protestant well of inspiration, but … set off down separate paths.”[p. 421] This led to a “divide between evangelicals and artists [which] became an unbridgeable chasm.”[p. 424] More recently, there have been calls to bridge this great divide in an effort to reclaim the culture, but “lacking a vigorous theory of culture, evangelicals have often responded to innovations with fear and then waited for the bizarre to become, through time, domesticated.”[p. 426] He continues: “Highly adept at the art of delayed appropriation, evangelical theorists have been masters of adaptation rather than agents of creation.”[p. 426]

In the final section, “Art and the Evangelical Future,” Lundin discusses the more general shift in theological aesthetics from space to time as “the central dimension.”[p. 429] He cites Balthasar and Barth as examples of this sort before offering Nicholas Wolterstorff’s Art in Action as a first step towards an evangelical theology of the arts. He concludes with “Lewis, Balthasar, and Barth [who] have demonstrated how that word of grace might be carried even into the heart of the culture of the arts,” as well as “Wolterstorff, Begbie, and Vanhoozer [who] have taken up that task with genuine intelligence and creative élan.”[p. 430]

Positively, Lundin’s discussion of evangelicalism’s relationship with the arts as a sort of sibling rivalry is apropos, and his take on “The Evangelical Resurgence”[pp. 425ff.] right on the mark. That said, the final section might be puzzling to some, another example of “delayed appropriation.” More positively, it might be an example of what Lundin’s colleague Matthew Milliner has called “a visual ecumenism.”[CIVA SEEN XII.2 2012, 20-23.] Evangelical or not, perhaps we might, in Milliner’s words, “lovingly respect” our “own tradition[s] … but also … joyfully indicate commonalities when they appear.”[Ibid., 23] An excellent overview.