Editor’s Note:  As the TheoArtistry: Text & Image exhibition ends, so does our series on this project.  Eden O’Brien, a collaborator in the group whose theme was ‘(Dis)embodied’, reflects on the artwork of teammate Becky Brewis and how the pieces’ engagement with the ‘act of looking’ also speaks into the disembodied virtual times in which we find ourselves.

In these 21 months in which the world has been seized by illness, the meaning of the human body has resounded most piercingly in its various absences: the mortal body is what becomes sick and suffers death while the lack of its spiritual, mediating presence opens a vacuum in communication, distancing us and devastating relationships. Now we know all too well that in place of the body the virtual has been enlisted to suture the gaps in teaching, socialisation, work, and play. We know as well that isolation is just as much a side-effect of ‘virtual-hugs’ as it is a governmental mandate. For if ‘to disembody’ is ‘to divest of a body, of corporeal existence, or of reality’, then the resulting vacuous state of existence is also a pre-condition of the virtual which pertains – metaphysically and technologically– to 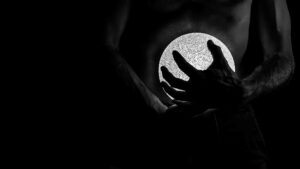 that which is simulated or essentially residual. We know now that, in times of contamination and no-contact, the virtual comes to simulate the bodily, playing upon touch and spatial presence – almost there, but not quite.

Yet, in our collective stumble towards an equilibrium, it is perhaps worth recalling that Art has always been the handmaid of the virtual: of dreams and imitation and even deception. In a time of virtual life – of lockdowns and social distance – where Art offers an escape, it might also make sense of Life.

In my opinion, this is precisely what artist Becky Brewis achieves in her four-part contribution to TheoArtistry’s Text & Image Project, entitled ‘A Sequence’, ‘Nine Parts’, ‘Child Falling Out of an Old Painting’, and ‘Two Arrivals’. Although there is much to say about her contribution to the exhibition and, indeed, the Text & Image Project as a whole, I am most struck by how the pieces engage with ‘the act of looking’. Where there is something all-too-virtual about the passive observation that we experience while surfing the web – in marked contrast – Brewis demonstrates that the act of looking itself can be direct, consuming, robust, and active. Brewis maintains an interest in ‘the daily experience of using the internet’, and her work – which can be interpreted as exploring certain perceptual difficulties resulting from such use – addresses the conundrum of virtual engagement, of empty spaces and the failure to connect. 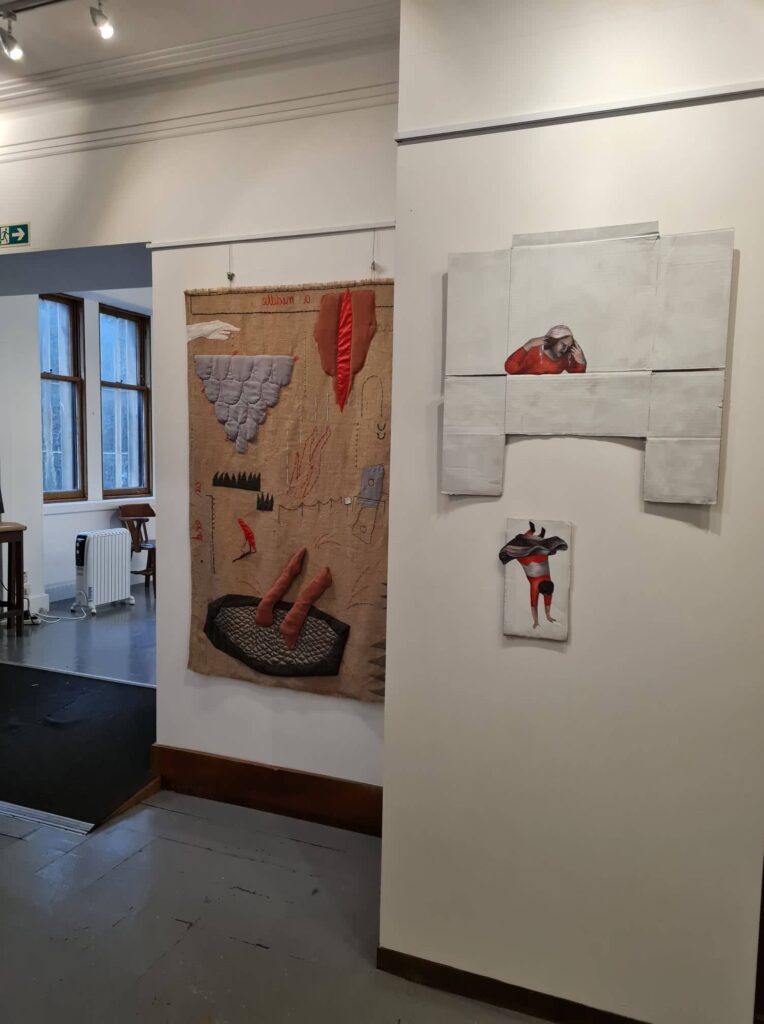 If there is something deficient about our online world, it is, perhaps, because the act of logging on means that the human spirit is simultaneously fragmented into bits and propelled into boundlessness. Brewis seizes this familiar sensation through the different iterations of brokenness that splinter across the pieces. ‘Child Falling Out of an Old Painting’ (acrylic on cardboard), for instance, is a work of extra-diegetic playfulness, to say nothing of technical intrigue. Brewis plucks its actors – a woman and child – straight from Simone Martini’s ‘Blessed Agostino Novello Triptych’ (c. 1328). She substitutes the backdrop of urban Sienna for a white-washed cardboard, the creases and texture of which remain strikingly visible while the figures retain accuracy. There is no Blessed Agostino Novello swooping down from on high to catch the falling child. Rather, the child floats, wholly cut from his mother’s cardboard mantle so that he seems to really be falling, his upturned gown fluttering out from the cardboard rectangle in which he is both trapped and secured. The final effect of this piece is dizzying and, I think, conceptually brilliant because it says just as much about the meaning of human connection by the imposition of real space as it does by the balance of faithful reference and crafty omission.

Yet, while empty spaces and fragmentation are foregrounded in all four pieces, many common threads stitch them together in a pattern of inter-reference, defying space and time. In her Artist Statement for the exhibition, Brewis commented:

I wanted to make a long moment; to create an unsequenced narrative, with imagery running across different objects, that slows down the act of looking. Themes, colours, and formal ideas – holes, emergent figures, cut-outs, falling, children, repetition – link the works and, I hope, present meaning-making as an imaginative act requiring physical space and time.

In ‘Child Falling Out of an Old Painting’, as in the rest of the pieces, Brewis slows down the act of looking: the imposition of space, the sever between mother and child, and the complex reference to an original all lend to the extension of the moment and give the viewer pause to reconsider the meaning of looking in the first place.

And yet, the tug between omission and reference is why Art can shed light on the place of the body within the virtual. Across all four pieces, Brewis strikes a balance between fragmentation and unity; the resulting dialogue is one that challenges the claim of such binaries upon how we engage the virtual. If the pervading theme of the exhibition is ‘Art as Revelation’, Brewis’ pieces seem to collectively ask, ‘what does it even mean to look?’ The connection of the similar and dissimilar, perhaps, forms part of the answer to this question. In any case, by ‘defamiliarizing the act of looking’, Becky Brewis arms her audience with a posture that may well enrich and embody our ever-necessary forays into the virtual.