When I was in college, I was involved in a decent production of Hamlet. To make it short enough for our undergraduate attention spans, the director cut it down to two hours, including intermission. What got the chop: the monologues and dialogues about Fortinbras and his ilk, and the emissaries running hither and yon. Horatio spoke the final lines, not Fortinbras. And rather than “Go, bid the soldiers shoot” with the final blast of a gun, our version of the play ended rather sadly and sweetly: “he was likely… / To have proved most royal.”

In short, I thought Hamlet was just about Hamlet, this one poor, sad guy. I did not realize Hamlet was about war.

Hamlet is about war: within oneself, within a family, but also within a nation. And it is about what happens in a country with a leader who is (who cannot help but be?) the manifestation of that country’s ills.

In family systems theory, the black sheep of the family – the “problem child” – is more helpfully understood as the manifestation of the family’s ills, rather than the alarming anomaly who disrupts Christmas dinners. In other words, it is the system which sets the conditions for instances of dysfunction to flourish.

This family systems principle also applies to nation-states. Where a public person or people group within a nation-state are causing trouble, ‘clogging up the machine,’ not fitting in, or generally being awkward, you could politely ignore them, suppress them, or you could give them the boot. Or you could remember the miner’s canary. And it is good to remember that the canary is not the same thing as the poison. 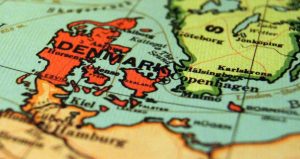 Hamlet is a nephew and a son, the member of a family. He is also a prince, and represents – even embodies – the nation-state of Denmark. If anything is ‘rotten in the state of Denmark,’ it is rotten in the country, the monarchy, and in Hamlet himself. How does this play out? And what might it teach?

Caught in a cycle of attack and counterattack with neighboring countries, Hamlet’s father was martial, but he was honorable – a good husband, as Hamlet tells it, and a respected king. The next king, Claudius, sends ambassadors to end the cycle of war, but is himself deeply dishonorable, having become king through treachery, poisoning Hamlet’s father. A combination of ideals and territory-defending – two principles which leaders of nation-states are typically expected to embody – is present in both brothers. It simply manifests in two different ways.

Perhaps one underlying question of Hamlet is whether war (conducting attack and counter-attack, to whatever degree) always corrodes honor where it resides. Perhaps another underlying question is whether it is actually mad, this political expectation that two principles – the ideal of national nobility and the ability (need?) to conduct war – should reside simultaneously in the same leader. The roles appear entirely “co-dependent” on one another, as an unhealthy family system is rife with co-dependency – at war yet inseparable. There is no space between these contrasting principles, and perhaps therefore no freedom to be at peace. Hamlet the man is the point at which conducting war with any sort of honor and “peacemaking” to safeguard one’s own gains meet and explode.

We see this in Hamlet’s singlemindedness, and in his prophetic intuition, from the beginning, that he will both lose his sanity and his life. He vows to give up anything which would distract him from his one purpose: to uphold the honor of his father, and to wage war against his uncle, knowing that to fully hold both within himself will mean no more licit pleasures, no more joy, no need to remain “balanced” or reasonable. He will pull this rotten tooth, and he is also somehow the tooth which will be pulled. To extract means to be extracted, and disastrously, apocalyptically. We are talking about the book of Revelation without the heavenly throne, the singing saints, the holy Lamb, or the new creation. Just step into the heart of evil, and then: ka-boom.

Is Hamlet the embodiment of nation-state leadership with no Christian vision of hope to help it? Is he the noblest, purest alternative to either war or conniving that humans, on our own, can come up with?

I have often wondered whether a truly committed Christian (hopefully with some courageous social ideals) could even become President of the United States, much less do a good job at it.

In a nation in which the head of state is also the executive- and commander-in-chief, to what extent must a leader always and inevitably arise from the ills and immaturities of the nation, as well as from its needs? The same one who has to do a new kind of dirty work in each election cycle is also the one who has to somehow represent a national character, stand for some kind of inner life or sustained values of a place – a personification of that nation’s highest ideas, nobility, and honor. How is that even possible?

Is it likely that, between the thoroughly secular and frequently morally opaque work of government and the embodiment of national ideals, there must be some space, or insanity will always eventually ensue?

I have been thinking lately of the modern British monarchy. (Yes, The Crown and the royal wedding had something to do with it.) This model of leadership remains alongside a very this-worldly government (Parliament and Prime Minister) to advise and support as the government plots and plans, but also to stand separately as a peacemaker, an ambassador, and a preserver of cultural ideals. The job of honorably representing a national soul, and to conduct oneself in the path of peace, is to assume that this is a worthwhile task, and that it has some relationship to a desirable reality. The two functions – nobility and self-preservation which requires one sort of violence or another – do not inevitably snap back together with disastrous force. 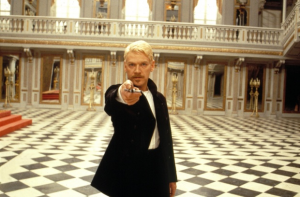 This is admittedly a stretch, but maybe this very attempt – a monarchy which depends on peacemaking and honor both, and not the endless attacks and counterattacks, however private or small, required in this world to protect (and expand) what is one’s own – that this model relies, however hiddenly, on an eschatological vision. There must be a hope or desire underneath this separation of roles that someday, somehow, a servant-peacemaker is what a leader of nations could or should be, and that national self-preservation is for now a necessary evil.

In this way, the function of a head of state separate from a commander-in-chief is, in our age, a function of hope – Christian hope. But the moment it ceases to be self-consciously Christian, should that day ever come, I predict it will cease to hold any real power or majesty. And so then we are back where we started.

Perhaps, with no eschatological vision, the people perish. Maybe they wearily run down like Claudius on his knees in futile prayer, or like the Queen Gertrude who lives with a lie and cannot keep face, or like Hamlet gone stark raving mad.

Maybe when we wed an object of admiration to political administration, attempts at even identifying noble national ideals remain as changeable, contradictory, and slippery as a people’s current interests, conflicts, needs, and moods.

In short, politics in the City of Man are, in the end, a tragedy. They are a doomed, if sometimes noble, experiment in preserving life and values.

Prince Hamlet has no eschatological vision. King Claudius fears hell (though probably not enough). Hamlet, Sr., is in a terrible purgatory. But who in Hamlet hopes for heaven? At the end, only when everyone is dying on the floor – the whole court fallen into a bloody, apocalyptic heap – and forgiveness is given and received, does anyone step in to recommend the hope of an afterlife: Horatio, God bless him, prays Hamlet to the care of angels.

But what of Denmark? This play is a tragedy because the man who might have become a Christ figure, a peacemaker who knows he is walking into the nasty wheels of the machine, instead takes up arms and becomes a suicide bomber. But it is also a tragedy because the final sound we hear in this mess is the sound of war, of a gun. It is the same sound for which Hamlet’s father suffers unspeakably in purgatory. What has Hamlet’s piebald sacrifice really accomplished?

How can a single person do what needs to be done and represent what a nation be with its heart of war removed? What does a healthy political psychology look like? And does Hamlet suggest that a healthy eschatological hope has a relationship, not to otherworldly disconnectedness, but to a realistic, this-worldly political health?

The Christian hope that leaders and nations can be more (with God’s help) and will someday be more (under the uninhibited reign of Christ) holds out a medicine that might at least sustain sanity, even if the vicissitudes of politics and the daily requirements of national leadership remain deeply flawed.

But we still need images (in everyday people? perhaps in art?) of how the noble principles of goodness, truth, and beauty manifest in our particularly national ways – ways which participate (even now, though fully someday) in the full, international, human mosaic of these manifestations. If we lose that, maybe the poison cup is all we have left. Maybe the most noble heart among us is destined only to crack under a vow of territory-guarding at all costs, or in a dissipating madness of confused identities.