“Redemption is not primarily an inward and solitary but and outward and communal affair.”[p.221]  Like a writer of detective fiction, Ralph C. Wood, Professor of Theology and Literature at Baylor University, waits to unveil this, his thesis, until the very last paragraph.  Not that the reader is denied many hints along the way; one page in three glitters with some polished and penetrating insight into the shortcomings of individualistic-moralistic Christian piety, and positively promotes an alternative vision:  a public, liturgical, and shared sacramental life as members of a Church.  G.K. Chesterton is frequently called upon as champion of this cause, but the real weight of the substantial volume rests not on a steady explication of his life or works, but in a hundred scattered suggestions of the strength of his eventual ecclesial position.

Chapter 1, for instance, instructively puts Chesterton in dialogue with the twentieth century Catholics classified together as theologians of la nouvelle theologie.  The core claim of these writers – Henri de Lubac, Hans Urs von Balthasar, the man who became Pope Benedict XVI, et al – was, according to Wood, that “while nature and grace must be distinguished, they must not be separated.  Their intrinsic relation gives the Gospel an abiding concern for the natural realm, here understood primarily as the political and social order.”[p. 10]  While he employs this theology in a useful critique of Chesterton’s rhetoricized arguments against biological evolution, the chapter’s final stress falls on Wood’s primary theme, which is the outlining of a positive theological politics.

Chapters 2 through 6 develop this theopolitics from consistently interesting angles, and repeatedly return to the question of what it means for the people of God, as the ongoing corporeal and corporate body of Christ, to live an organized existence without conforming to the exploitative patterns of secular politics.  Frequent reference is made to Augustine’s theory of “two cities,” with the emphasis always falling on the believer’s primary allegiance which belongs not to the temporally-conceived goods of a City of Man, but to the charity-ordered City of God.  In the chapter “Patriotism and the True Patria,” for example, Wood writes, “kindred loves are the source of the corporate identity and solidarity that become the basis for a common culture and heritage;”[p. 47] he elucidates Chesterton’s promotion of Distributist economic ideals as “an indispensable means of maintaining the two Cities in their proper relation;”[p. 58] and concludes by describing these as pointers to “the one universal Community that is meant not to poison men with pride but to heal them with humility.”[p. 66]

Chapter 3 will be of particular interest to specialists, offering a searching – and at times trenchant – engagement with the “troublous matter”[p. 70] of Chesterton and war.  Chapter 5 presents an astute philosophical analysis of liberty and the “so-called private self,”[p. 28] a particularly infectious modern fallacy, which even for many Christians suggests the plausibility of “a life conducted entirely according to one’s own private choices, with utter disregard for binding obligations to formative communities.”[p. 130]

The conclusion exposes the book’s weakness.  Returning to the topic of nightmare which has resurfaced haphazardly throughout, Wood gives a close reading of Chesterton’s detective novel The Man Who Was Thursday in a valiant effort to justify the book’s professed organizational theme.  But if this denouement be charitably entertained as Wood’s own attempt at detective-writerly misdirection, it comes across as a little too clever; the perceptive sleuth of a reader will not be misled by these final twists of ingenuity, but will already have reached the real conclusion.  Even the laughing face of Chesterton is, in the end, a trick and a mask.  Wood’s true quarry, hounded across two hundred pages of text and hidden among half again as many pages of appendices and footnotes, is an “embodied tradition,”[p. 150] a “community that offers a prophetic and sacramental alternative to every other polity.”[p. 103]  Like the romantic adventurers he describes earlier in the study, it would seem that Wood only mentions the delusive topic of nightmare at all as “an illusory goal that, in the very undertaking of it, enables them to locate the ostensibly real.”[204]  A single question lingers at the close of this volume, as applicable to its literary criticism as to its ecclesiology.  Where can we find the organizational unity toward which it so nobly strives? 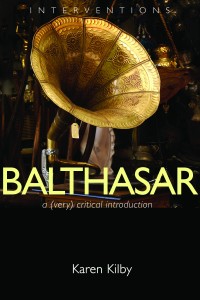 In this book, Karen Kilby, the newly appointed Bede Chair of Catholic Theology at Durham University, discusses her concerns regarding the Swiss theologian Hans Urs von Balthasar. Kilby recognizes that there is much to learn from and develop in the theology of von Balthasar.  Nevertheless, she argues that his enormous popularity is unjustified. Perhaps Kilby simply means to caution against making an idol – a warning not to build one’s whole school of thought upon Balthasar’s theology.  However, she concludes that Balthasar should not be treated like a guide, and certainly not as a Church Father of our age.  Continued attention to Balthasar is advised, but with a certain wariness.

Contrary to Balthasar’s own preference for the Johannine “vision of the whole,” Kilby’s proposal for a more balanced approach to reading this prolific writer is to commit to it in fragments – since his volumes defy summary.  Though this approach would foster a less vivid reading of an otherwise vigorously dramatic collection, Kilby issues the thrust of her claims: the one thing to not learn from Balthasar is how to be a theologian.

In an effort to learn to be a theologian, and to learn the craft of theological inquiry, the study of various masters is necessary.  Kilby argues, however, that while Balthasar is often creative and stimulating, his tendencies to assert rather than argue, and to place himself above the discussion should dismiss or deny his endeavors from being considered theological works.  She applies this critique of what is “fundamentally problematic” throughout analyses of Balthasar’s methodology, his writings on the Trinity, the Passion, Gender, and the nuptial relation between God and Church.  For Kilby, he simply presumes to know more than what can be known.

Though it is not her primary aim, Kilby offers an extremely accessible introduction of Balthasar’s life and work.  That said, her publication may discourage readers from endeavoring to understand the mind and work one of the most prolific theologians of the twentieth century.

This coming week will see Transpositions devote its posts to the review of The Cambridge Companion to C. S. Lewis, edited by Robert MacSwain…