Terrence Malick has done the unthinkable. He has made a film that looks unflinchingly at life’s greatest mysteries – love, loss, alienation, and suffering – without a hint of cynicism. 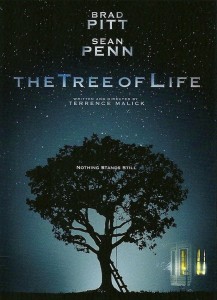 Terrence Malick has done the unthinkable. He created a film that looks unflinchingly at life’s greatest mysteries – love, loss, alienation, and suffering – without a hint of cynicism. It’s a feat that’s rarely even attempted. Furthermore, The Tree of Life is a film that not only attempts to be beautiful, but invites and urges the viewer to think about beauty itself. We only need to remember Gore Vidal’s remark that “Santayana was the last aesthetician to describe beauty without self-consciousness; and that was in 1896” to comprehend the audacity of such a project.[1]

The internet is already bursting with commentary on The Tree of Life, including a barrage of reviews by Christian commentators. Rather than highlight themes that have already been competently addressed, I want to offer a particular reading of the film’s nature-grace dichotomy I have not been able to find in other reviews. I realize this means I’m going out on a limb, but I think this reading is worthy of further discussion.

Much has been made of the film’s presentation of “two ways through life”: the way of nature and the way of grace (the father’s and mother’s ways, respectively). Nearly every interpretation of the film I’ve encountered relies on this paradigm, and it’s easy to understand why. Early in the film, the mother explains in a voice-over that these are the two ways through life taught to her by nuns in school. It is clear that she has adopted this understanding. The problem is that, while this is indeed the perspective of one of the film’s characters, the film itself (and by implication, Terrence Malick) is telling us something quite different.

The film shows us that the nature-grace scheme is a false dichotomy. Nature is shot through with grace, such that it is impossible to separate one from the other. Grace is not some alien force that occasionally intrudes into a closed system (“nature”). As G. M. Hopkins declared, “The world is charged with the grandeur of God.” It is grace all the way down.[2]

Notice the timing of the creation sequence. Many works of literature and film juxtapose scenes from nature with the principle action of the story. John Steinbeck’s The Grapes of Wrath is one notable example. This is typically meant to invoke the question, “What makes our struggles so much different from the rest of nature’s struggles?” But Malick is doing something else. The montage of images of the universe is meant to instill wonder and awe; by also depicting images of human blood cells and other biological structures at the microscopic level,  human life is elevated and ennobled as a wonder to behold. The creation of one human life is as glorious as the creation of the universe.

Notice the two characters who are supposed to represent the way of nature, Mr. O’Brien and his son, Jack. The environments they find themselves in are anything but “natural.” The father works in a loud factory filled with machines, and he travels on airplanes and tries to secure patents for his inventions. The adult Jack finds himself trapped in a world of stark angles and colorless walls. Both his home and his workplace are cold, soulless spaces far removed from the warm glow of nature. Like his father, he has failed “to see the glory”, and he is alienated from the life that surrounds him.

What all of this tells us is that there are not two separate forces in the world. Nature does not exist apart from grace. The category of “nature” as a cold, indifferent domain is something that we merely attempt to create – a space we try to carve out that is hidden from God. Nature and grace may represent two approaches to life, but what Mrs. O’Brien had to learn was that no events occur in the world apart from grace, including the death of her son. Like Job, her suffering can only be answered by seeing the glory of God’s grace, even in the midst of her pain. This realization allows her, in the climax of the film, to accept what has happened: “I give my son to you.”

Propositional statements about the problem of pain have a poor reputation of satisfying those who wonder why God allows suffering in the world. They rarely move beyond the realm of platitudes and trite condolences. Terrence Malick, instead, has resurrected the idea of beauty – specifically, God’s grace manifest in creation – as an aesthetic response to the perennial problem of human suffering. It’s not meant to be the final word in the discussion, but sometimes it’s better to show than to tell.